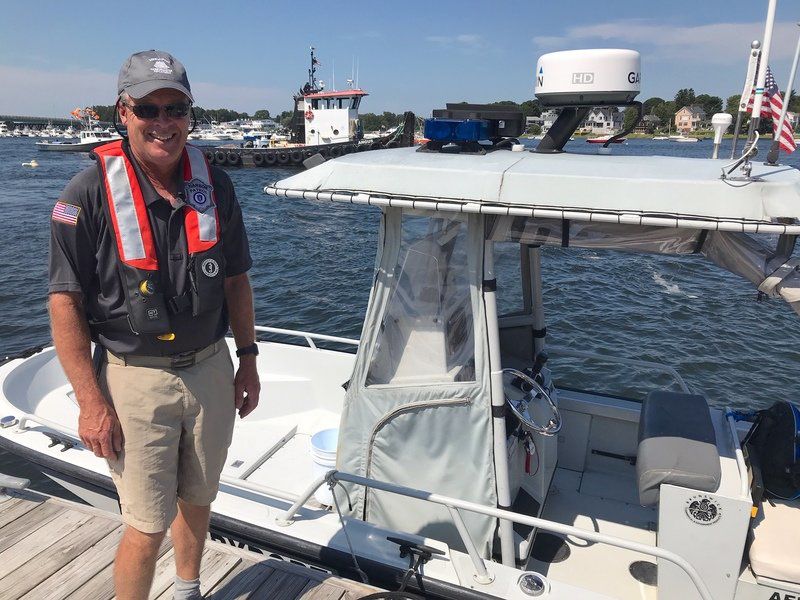 Tim Wareham, Newburyport’s assistant harbormaster, was back at work Monday after rescuing a man trapped on an overturned boat in the Merrimack River on Saturday.DAVE ROGERS/Staff photo 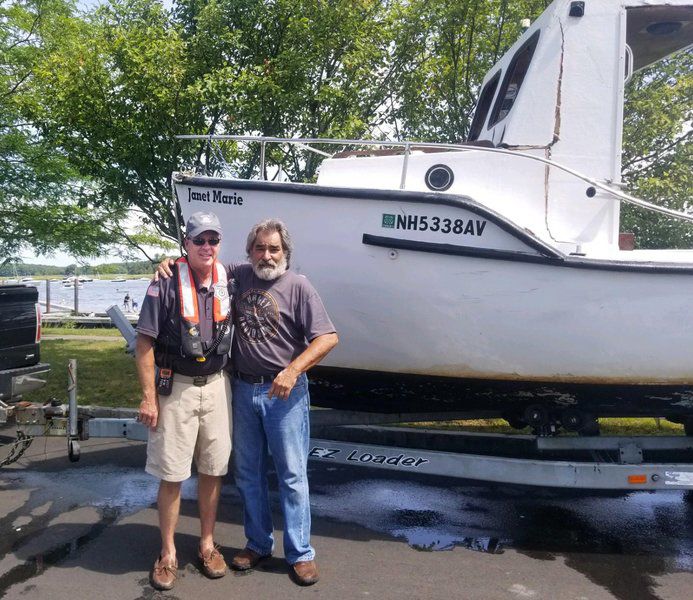 Tim Wareham, Newburyport’s assistant harbormaster, was back at work Monday after rescuing a man trapped on an overturned boat in the Merrimack River on Saturday.DAVE ROGERS/Staff photo

NEWBURYPORT – Best practices dictate that harbormasters aren’t supposed to jump off their craft when responding to an emergency call.

But when the captain of the sinking Janet Marie was tangled in rope Saturday afternoon and in danger of following his foundering vessel to the bottom of the Merrimack River, Newburyport Assistant Harbormaster Tim Wareham grabbed a knife and dove in to cut him loose.

“You had to do it,” Wareham, a retired Newbury firefighter, said Monday.

Wareham said he first tossed a life ring to the distressed captain, Paul Belley. But Belley, who looked dazed, was unable to grab it.

“I can’t move, my legs are tied to the boat,” he said, according to Wareham.

With his options limited and the man in danger of drowning, Wareham jumped into the river and swam to Belley. After cutting the rope that bound the man, Wareham grabbed him and guided him to a harbormaster’s boat.

Wareham, who joined the Harbormaster Department less than a month ago, downplayed his efforts Monday, saying he was merely doing his job. His only concern was whether his life vest would work.

“I don’t like the water. I’m glad that this thing inflated,” he said, pointing to his vest.

“It could have been a recovery, not a rescue,” Hogg said Monday.

Three men and two 8-year-old children were thrown into the choppy waters about noon Saturday when the 21-foot Janet Marie overturned after colliding with the 58-foot Captain George near the turbulent mouth of the Merrimack River. Earlier reports incorrectly identified the smaller boat.

The five people on the Janet Marie were pulled from the water by boaters from The Captain’s Lady and the Newburyport harbormaster’s crew, according to the Coast Guard.

Belley was caught underneath the boat in an air pocket, Hogg said. After grabbing a life preserver, the captain swam to the surface only to realize he was tangled in rope and unable to  free himself.

Hogg said he generally doesn’t want his crew jumping in the water, but considering Belley’s situation, Wareham made the right call.

“If the boat went down, he would have gone down with it,” Hogg said of the captain.

Wareham retired from the Newbury Fire Department in 2018 after 20 years on the force and recently joined the Newburyport Harbormaster Department.

In December, Wareham received a Citation of Appreciation on the state Senate floor in recognition of his service to Newbury.

The Janet Marie’s captain was taken to an area hospital and released later Saturday. No one was seriously hurt.

The Janet Marie was hauled to the surface the following day and towed to Cashman Park, according to Hogg and Wareham.

The collision’s cause remains under investigation by the Coast Guard but is expected to be released later this week. Hogg said he met with Fire Chief Christopher LeClaire and Coast Guard officials as the agencies work together to determine the cause.

A phone call to the Coast Guard seeking more information on the collision was not returned by press time Monday.