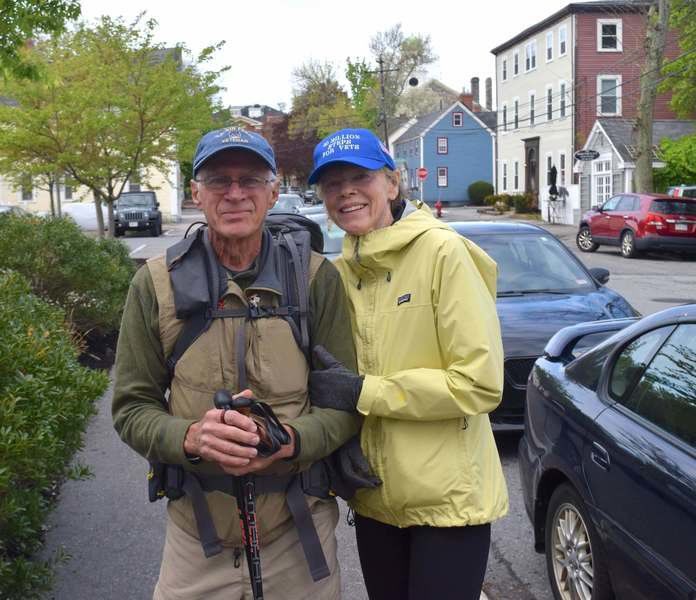 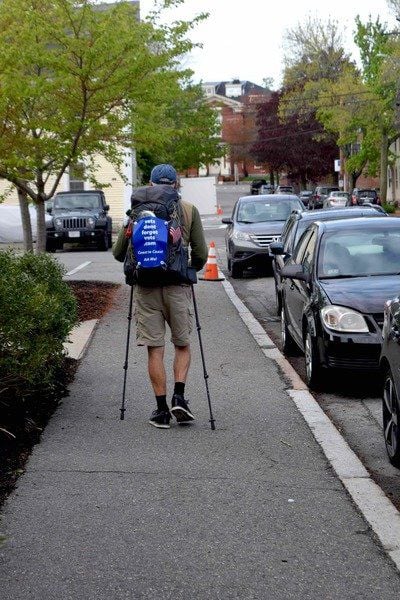 William Shuttleworth walks up Market Street in Newburyport just after 7:30 a.m. Wednesday as he starts his cross-country trek. His sign includes his website, vetsdontforgetvets.com, and urges passersby to ask him about his quest. RICHARD K. LODGE/Staff photo 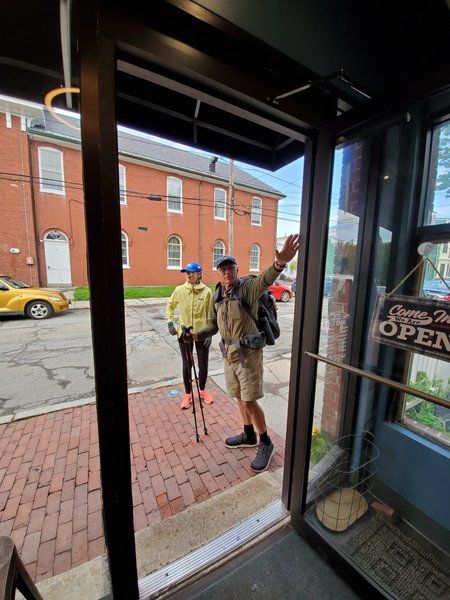 Courtesy photo/Karen CameronWilliam Shuttleworth waves farewell to well-wishers outside Changing Tides Cafe in Newburyport on Wednesday morning with his wife, Patty, by his side.

William Shuttleworth walks up Market Street in Newburyport just after 7:30 a.m. Wednesday as he starts his cross-country trek. His sign includes his website, vetsdontforgetvets.com, and urges passersby to ask him about his quest. RICHARD K. LODGE/Staff photo

Courtesy photo/Karen CameronWilliam Shuttleworth waves farewell to well-wishers outside Changing Tides Cafe in Newburyport on Wednesday morning with his wife, Patty, by his side.

NEWBURYPORT – After joining a dozen friends and supporters singing a verse of “America the Beautiful” on Wednesday morning, William Shuttleworth donned his 25-pound backpack, grasped his two trekking poles and took the first steps on a 3,000-mile walk across America.

Shuttleworth, a 71-year-old Newburyport resident and Air Force veteran, is walking across the country in what he estimates will be a 7½-month trek to talk with veterans and raise public awareness about the health care, housing and economic issues faced by many who have served.

Shuttleworth is a frequent patron of Changing Tides Cafe on Pleasant Street, so it was appropriate that the new shop, run by Dawn Pantano and Sharon Pozzi-Thomas, would be where he would say goodbye to friends and begin his long walk.

For the first part of the journey in Newburyport, the walker’s wife, Patty Shuttleworth, joined him, wearing a cap that said “10 million steps for vets.” Shuttleworth sported a blue and white poster on the back of his pack with his website – vetsdontforgetvets.com – and the words “Coast to coast – ask me!”

His steps Wednesday morning marked the official start of his trip, but Shuttleworth walked 20 miles or more daily, carrying his full pack on his back, for months before starting the journey.

In a recent interview with The Daily News, Shuttleworth said he was inspired to walk across America last year while working at a park in California where many impoverished veterans were camping out of desperation. He listened to their stories and learned many of them were homeless, struggling with drug addiction and without money for medical care.

On his trip, he’ll camp along the way, hoping to meet and hear the stories of as many veterans as he can. He has a route mapped out – which is shown on a map on the wall at Changing Tides – but hasn’t made arrangements for accommodations, aiming to walk about 25 miles each day, possibly meeting and talking with people who see his sign and ask about his journey.

He plans to give talks to local groups, state officials and local officials, and others to create awareness of veterans’ needs and will update his online blog along the way. Early on, he set up a GoFundMe page with a goal of $25,000, pledging 85% of the donations to the Disabled Veterans of America and 15% to cover his expenses.

City Clerk Richard Jones was one of the well-wishers at the cafe when Shuttleworth walked down Pleasant and up Market streets to begin the trip. Jones termed Shuttleworth’s quest “courageous.”

“As he has often said, he lives by the credo that everything you ever wanted is on the other side of fear,” Jones said. “He’s inspiring. He doesn’t live a life of caution or fear – he just lives. Who would not admire someone who walks 25 miles a day for 7½ months and crawls into a tent at night?”

Sarah Hayden, executive director for NCM Hub, Newburyport’s community access cable studio, also was among the well-wishers on Wednesday and recounted how touching it was for Shuttleworth and the group to sing “America the Beautiful” before he left.

“That was his send-off – so touching and meaningful,” she wrote in an email. “I hope to be at the other end singing that same song! It is so very cool.”

For more about Shuttleworth and his journey, and to sign up for emails and updates on the trip, go to vetsdontforgetvets.com.