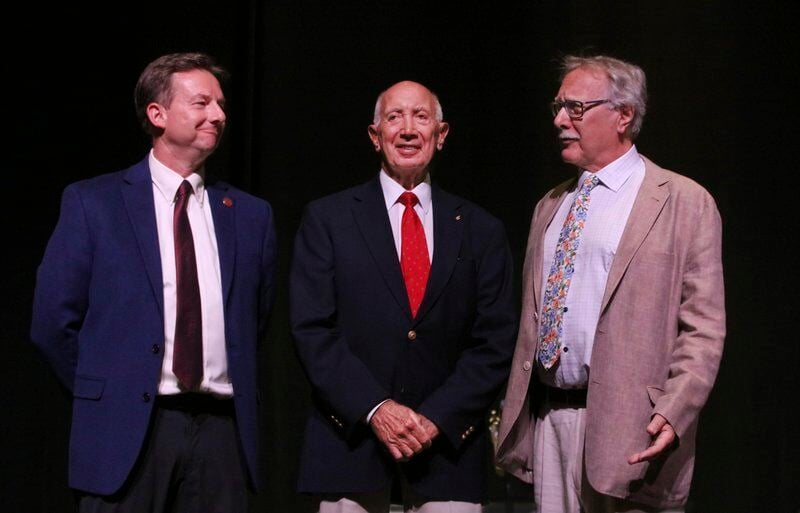 Newburyport mayoral candidates, from left, Sean Reardon, Warren Russo and Charlie Tontar join each other on stage before the start of a candidates forum Tuesday evening in the Rupert A. Nock Middle School auditorium. 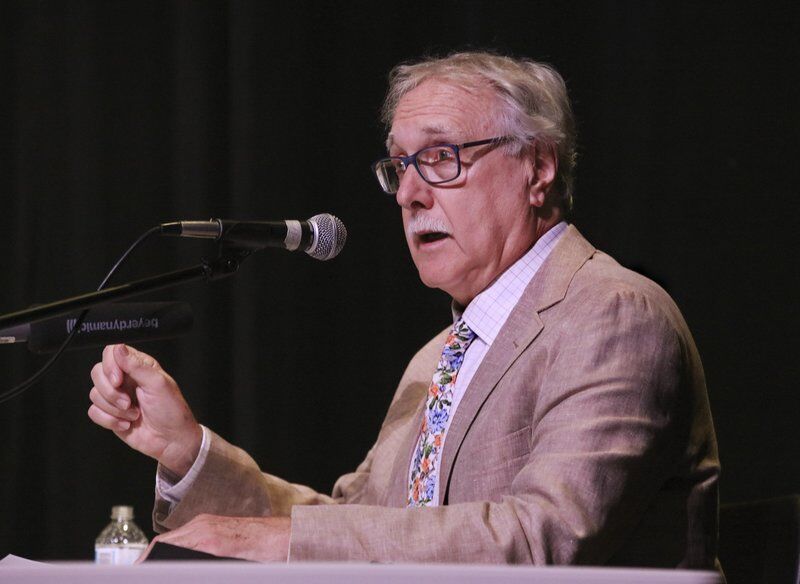 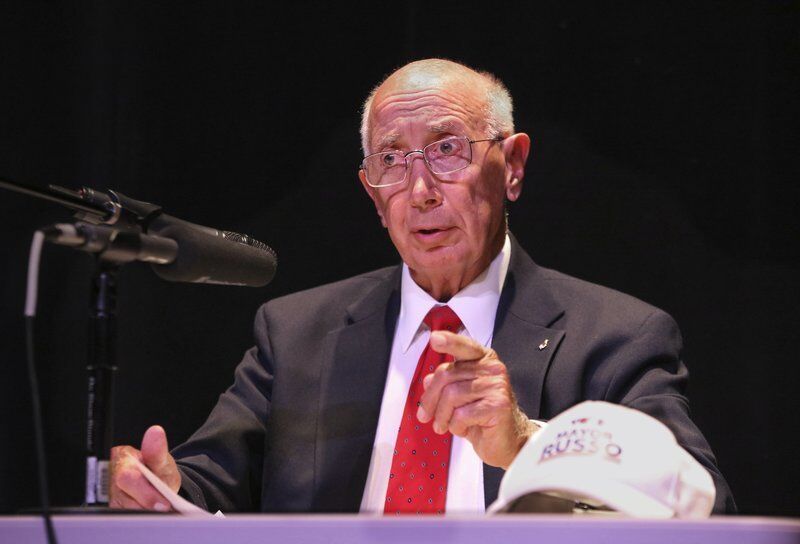 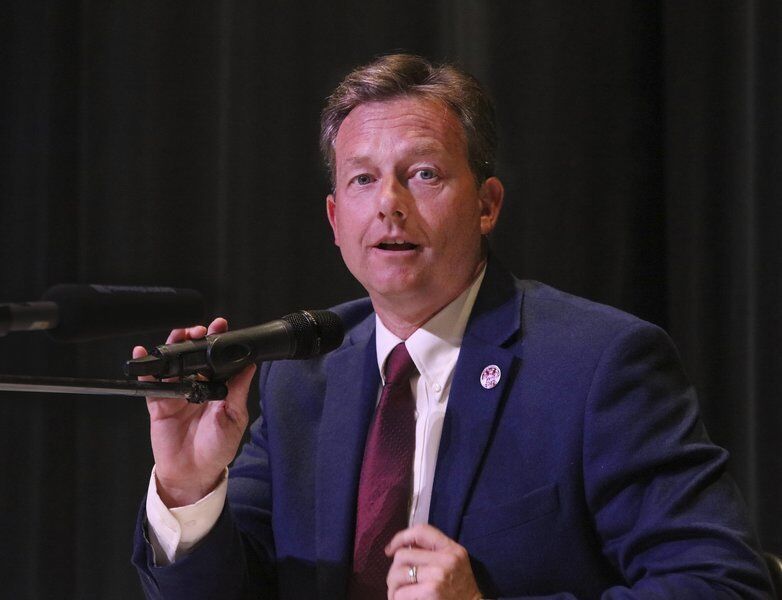 Sean Reardon, a candidate for mayor of Newburyport, speaks Tuesday evening during a candidates forum in the Rupert A. Nock Middle School auditorium.

Newburyport mayoral candidates, from left, Sean Reardon, Warren Russo and Charlie Tontar join each other on stage before the start of a candidates forum Tuesday evening in the Rupert A. Nock Middle School auditorium.

Sean Reardon, a candidate for mayor of Newburyport, speaks Tuesday evening during a candidates forum in the Rupert A. Nock Middle School auditorium.

NEWBURYPORT — The three candidates vying to become the next mayor faced off Tuesday night, debating issues such as bringing a hotel to the city, finding Newburyport Youth Services a permanent home, and dealing with storm surge and combined sewer overflows.

Speaking before a crowd of more than 100 people in the Rupert A. Nock Middle School auditorium, Newburyport School Committee member Sean Reardon, Plum Island resident Warren Russo and City Councilor at large Charlie Tontar all made their case for why voters should choose them to lead the city for the next four years.

All three candidates agreed that the city needs a hotel. Russo suggested the former Kmart building in Port Plaza, while Reardon and Tontar said more discussions are needed with New England Development regarding the Waterfront West proposal.

When asked how they would work to support local businesses, Reardon said he would like to develop a community website for all businesses to use, especially those that cannot afford to run their own. He would also like to hire an economic development director to recruit businesses to come to the city.

Russo said he would like to see more street fairs, as well as a dining card that all restaurants could use. Without a hotel, though, he said tourists would only visit for the day because there is no place for them to stay. He also emphasized the importance of keeping the central waterfront wide open.

Tontar said it is important to understand why people come to Newburyport. He wants to finish Central Waterfront Park and also work with owners in the business park to assess their needs. He added that affordable housing ties into that because without it, businesses have trouble finding people for work.

Addressing Newburyport Youth Services and its current home at the former Brown School at 42 Milk St., Tontar said the current Phase 2 environmental assessment of hazardous materials on the property would determine what happens next, particularly in terms of cost.

Credere Associates LLC is expected to provide the assessment results, including mold and air quality tests, in about a month.

Tontar said the building needs to be made safe and asbestos must be removed. He would like the building to be used for affordable housing for seniors. He noted that steps need to be taken to reduce the tax burden on seniors.

Whether the building could also house Youth Services comes down to financing, he explained.

He was one of five councilors who voted in favor of purchasing 57 Low St. for $220,000 earlier this year. The site had been considered as a potential home for Youth Services or other city departments. The sale required a two-thirds vote by the council, and six councilors voted against the purchase.

Tontar said he would look forward to seeing an update from the site selection committee, but noted that financing streets and sidewalks, a new fire station, new science labs at Newburyport High School, and the central waterfront are also high priorities for him.

Reardon said the former Brown School should be turned into senior affordable housing.

He has some ideas for where Youth Services should go, but believes the site selection should be a public process with “resident buy-in.”

Reardon said the city is missing a “facilities master plan,” which would drive decisions about how to use certain facilities in the community.

Russo thinks the former Brown School building should be sold, leaving room for the city to buy it back later. He noted that “the longer you let a building sit, the more expensive it eventually becomes.”

When asked about a home for Youth Services, he said taxpayers do not need to fund another building and that NYS could have a permanent base at the schools.

When asked about how to address storm surge, Russo was not sure that a lot could be done, saying, “Part of this problem cannot be solved because these forces are greater than our own.”

Reardon emphasized the importance of protecting the city’s water supply as well as the wastewater treatment plant. He said he was pleased with the city’s climate resiliency plan and wanted to work to implement it.

Tontar spoke highly of the recent shoreline resiliency project, which addressed the vulnerability of the wastewater treatment plant. He also said the city needs to protect its water supply.

Other topics discussed included how to respond to the COVID-19 pandemic and whether vaccines should be mandated for city employees, how to address inequities around social justice, and how to increase the number of affordable housing units in the city.

The forum was broadcast by NCM Hub and will be rebroadcast before the preliminary election Sept. 21. The general election is Nov. 2.

To watch the forum:  https://youtu.be/wbghgXhIHkE