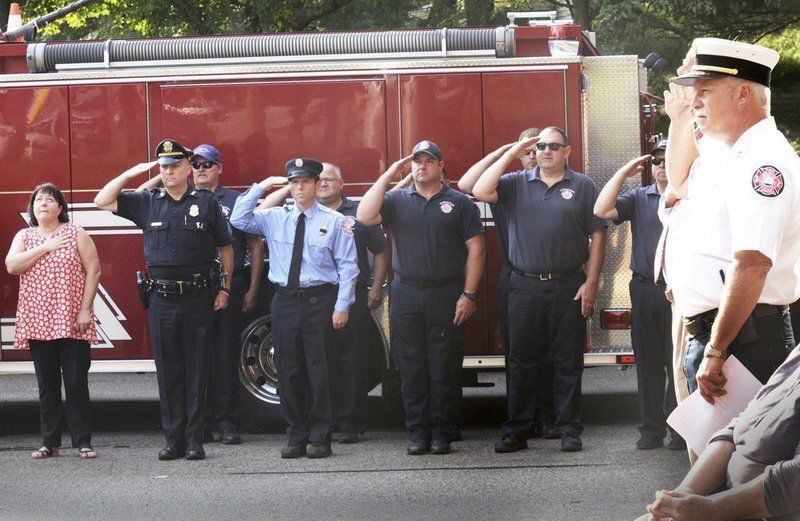 BRYAN EATON/Staff photoNewburyport Fire Chief Christopher LeClaire, right, along with firefighters and police officers, salute as the flag is lowered to half staff during the annual 9/11 remembrance at the fire station Wednesday morning. 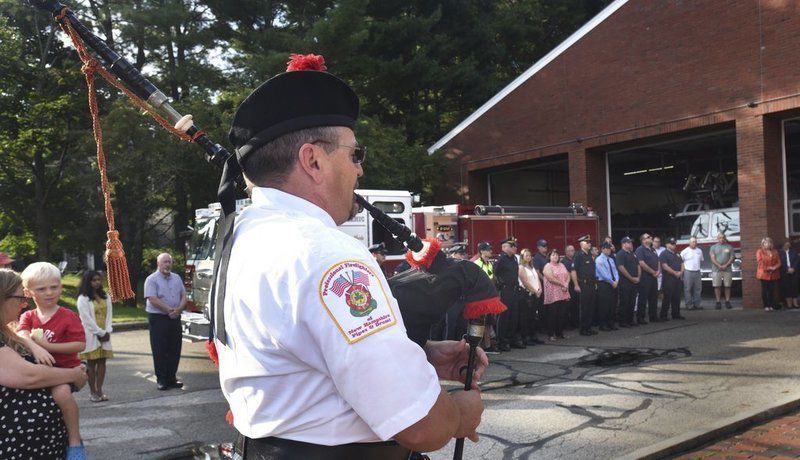 BRYAN EATON/Staff photoNewburyport Fire Chief Christopher LeClaire, right, along with firefighters and police officers, salute as the flag is lowered to half staff during the annual 9/11 remembrance at the fire station Wednesday morning.

NEWBURYPORT – Firefighters, police officers, local officials and residents came together Wednesday at 8:30 a.m. outside the fire headquarters on Greenleaf Street to remember and reflect on what transpired 18 years ago when terrorists in hijacked airliners killed nearly 3,000 people in New York City, Washington, D.C., and rural Pennsylvania.

The roughly 15-minute ceremony began with the lowering of the Fire Department's American flag to half staff. In his brief remarks, Fire Chief Christopher LeClaire implored residents to never forget the horrors of that day.

"We were told not to forget, but Americans forgot. News media stopped talking about it, and they stopped showing the images of the attacks," LeClaire said. "Those that were still suffering were still ignored. In the years that followed, some chose to act like it never happened."

Among the 2,997 people who lost their lives that day, 206 had ties to Massachusetts. And since 9/11, at least 200 more people around ground zero, where the World Trade Center once stood in Manhattan, have died from attack-related illnesses, according to LeClaire.

"Today, we remember those who have died and pray for those that are still suffering," he added.

City Council President Barry Connell also spoke at the ceremony, asking people where they were when they first heard of the terrorist attacks.

"I will never forget that day," Connell said.

The ceremony concluded with the playing of "Amazing Grace" by a lone bagpiper who stepped slowly and somberly away from the department's flagpole and walked away from the crowd.

At just about the same time the first jet, American Airlines Flight 11, crashed into the World Trade Center's North Tower at 8:46 a.m., a bell was struck inside the station.

By the time United Airlines Flight 175 struck the South Tower at 9:03 a.m. 18 years ago, the ceremony Wednesday was over but many stayed to share stories and shake hands.

Among those in attendance were City Councilors Thomas O’Brien and Afroz Khan. The Police Department was represented by Marshal Mark Murray, Lt. Matthew Simons, Sgt. Howard Adams and Officers John Gavin and Joshua Tierney, among others.

Memorial observances for the victims of 9/11 were also held in Amesbury and Salisbury, as well as many communities across the country.

A half hour after the ceremony Wednesday, just before American Airlines Flight 77 crashed into The Pentagon at 9:37 a.m. on Sept. 11, 2001, a moment of silence was observed in Newburyport District Court.

Judge Allen Swan delayed normal court proceedings to remind people in the packed courtroom that this was not an ordinary day and one that deserved a moment of reflection.