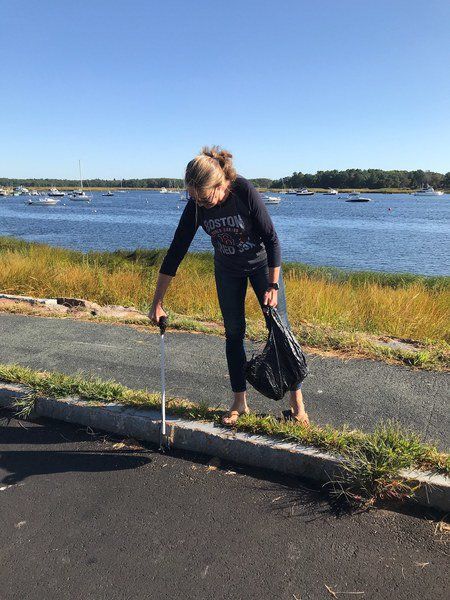 DAVE ROGERS/Staff photo"Plogger" Sarah Spaulding of Newburyport picks up trash while getting some exercise along the waterfront recently. 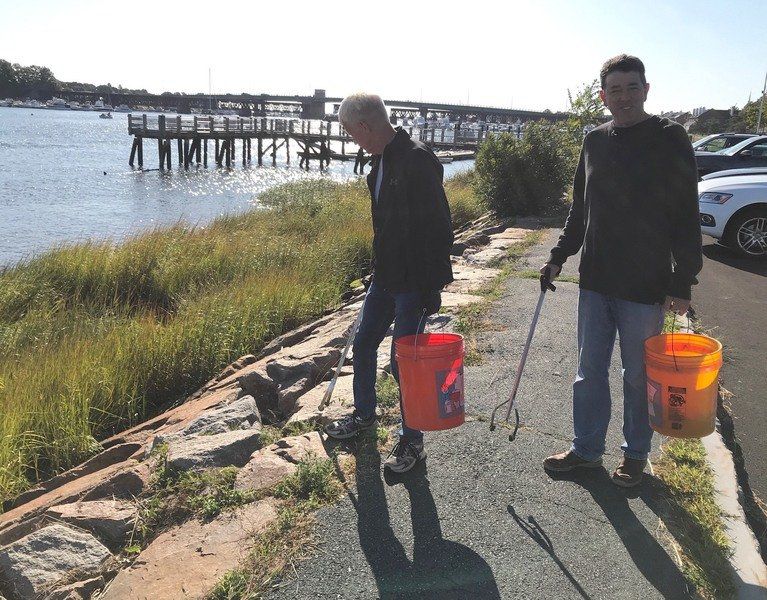 DAVE ROGERS/Staff photoKen Mackie, left, and Jim McCarthy fill their buckets with the trash they pick up. On most days, it takes about 45 minutes to fill the buckets.

DAVE ROGERS/Staff photo"Plogger" Sarah Spaulding of Newburyport picks up trash while getting some exercise along the waterfront recently.

DAVE ROGERS/Staff photoKen Mackie, left, and Jim McCarthy fill their buckets with the trash they pick up. On most days, it takes about 45 minutes to fill the buckets.

NEWBURYPORT – Despite all its natural charm and beauty, the city has a littering problem – one that has inspired joggers, runners, walkers and even kayakers to bring along a bag or bucket to pick up trash as they exercise.

There's a special name for this altruistic and community-minded activity: plogging.

Coming over from Sweden a few years ago, plogging is a combination of jogging and picking up trash. But for local ploggers, there's no rule against doing other activities while picking up trash.

Sarah Spaulding, who founded the Facebook group Plogging Newburyport in May 2018, said she and a couple of friends typically walk together a few times a week.

"If we're going to be walking around town anyway, we might as well kill two birds with one stone," the High Street resident said. "The message is when you're doing an activity and you're outside, grab a bag."

Spaulding said she started the Facebook group, which had 220 members as of earlier this week, after reaching a boiling point over the amount of trash she spotted while walking along High Street, the downtown and areas near the Merrimack River.

"Everywhere I went there was trash," Spaulding said. "It just made me cuckoo."

Her efforts attracted the attention of longtime local activist Jim McCarthy. He is already known as the person who has kept the green space around the Route 1 rotary as pristine as possible for roughly the last five years.

The beauty of Spaulding's Facebook group, according to McCarthy, is there's no formal meetings or presidents or dues. There's only the picking up of trash when one has some spare time.

"You don't have to go to City Hall and sit in a three-hour meeting to get something done," McCarthy said. "You just get up and go."

Spaulding said Plogging Newburyport has had some coordinated cleanups, but for the most part, people go out on their own and document their progress on the Facebook page.

"It's a fun group of people. It's kind of nice to know there's someone else out there," Spaulding said.

On Friday morning, the two ploggers, along with Ken Mackie of Newburyport, met at Cashman Park and began filling buckets and bags with trash they picked up using grasping sticks.

McCarthy said it can take as little as 15 minutes to fill his bucket depending on where he's plogging. The worst offenders, he said, are cigarette smokers.

"It's literally a sea of cigarette butts," McCarthy said.

Spaulding is more of a traditional plogger because she makes sure she's exercising while picking up trash.

"I can't jog because there's too much trash, but I can walk," Spaulding said.

Both said that if they plog along the same routes for a few days in a row, they can tell they are making a difference not only in terms of trash removal, but in inspiring others — including some who stop to thank them.

"People hardly b---- at you for picking up trash," McCarthy said.