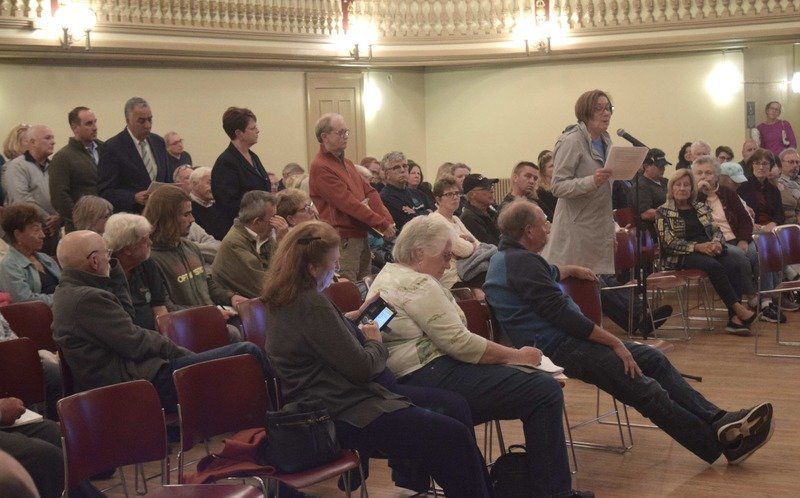 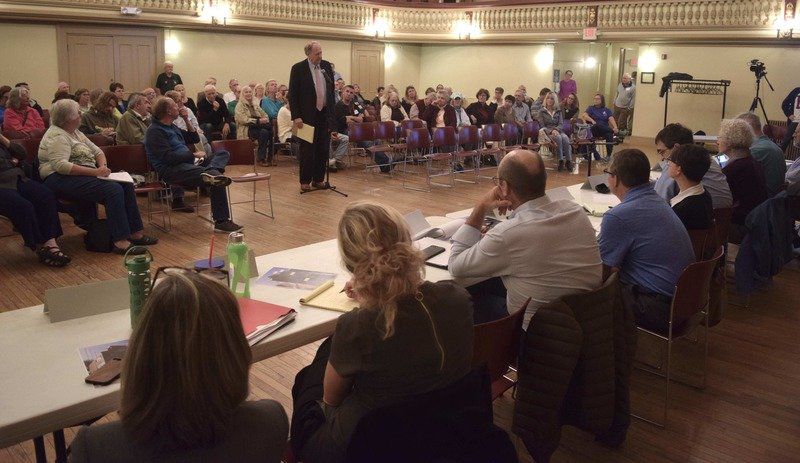 NEWBURYPORT — Several residents raised concerns about the proposed size and density of New England Development's Waterfront West project at a public hearing Thursday, with some calling on city officials to tighten zoning restrictions on the waterfront.

More than 100 residents gathered in City Hall Auditorium Thursday night to speak and hear about a set of proposed zoning changes for the site requiring that the tallest buildings front Merrimac Street and calling for a minimum of 12% affordable housing within the proposed 215 apartments.

Dozens of people took to the microphone at the two-hour hearing, which will continue Sept. 26, to express disapproval with the proposed zoning amendment in front of a panel that included eight Planning Board members and eight city councilors. Several people, including Frank Cousins, executive director of the Greater Newburyport Chamber of Commerce, spoke in favor of the plan, citing support for the proposed hotel.

Many who spoke against echoed similar concerns — which have persisted since the developer first presented plans in 2017 — about the project's size, building height, number of housing units and potential impact on Newburyport's downtown.

"The buildings are too dense and too tall. I can't imagine driving down Merrimac Street and having a wind tunnel between the garage and five-story buildings" included in the proposal, said Dawes Street resident Ted Jones. "This is not compatible to the buildings downtown, most of them are two or three stories, not five."

Others called on New England Development – a major property owner in Newburyport – to release three-dimensional models of the proposed Waterfront West, and asked city officials to set zoning requirements that would further limit the project's size.

"It's too much... it's too massive, it's too dense. It's  not conducive to this city," said Lime Street resident Jeannette Isabella. "We have to think of the impact this is going to have on this city."

Lisa Mead, an attorney speaking on behalf of the residents of neighboring Horton's Yard, requested that the zoning amendment not be passed until it addresses the height and setback requirements for buildings adjacent to Horton's Yard.

There were a handful of residents who spoke in support of the proposed zoning amendment, saying it would help the development bring new life to the waterfront.

In his turn at the microphone, Cousins said, "Getting a hotel is beneficial to the city of Newburyport, and it also would help restaurants and businesses downtown. I think there's a willingness for all parties to work together to move this particular project forward."

"We'd like to take a lot of those issues back. ... We'd like to work with the abutters some more and some of the resiliency folks, and maybe we could make some suggestions," said Twohig. "I hope we can develop something that the community can embrace, and that really is our goal."

The city created the Waterfront West Overlay District in 2005 to encourage a redevelopment of the area that would be consistent with the character of the city’s downtown. In 2017, the city began to revisit the overlay district through a series of public meetings to make necessary updates to flood zones and other conditions.

The zoning updates for the overlay district were presented to the City Council in July in the form of a 20-page ordinance sponsored by council President Barry Connell.

In a previous interview with The Daily News, Connell said the ordinance would update the overlay district to follow the city’s 2017 master plan and a report submitted Jan. 28 by the council’s Ad Hoc Committee on Waterfront West.

The proposed ordinance sets a requirement for a hotel or inn with a minimum of 50 guest rooms; retail, restaurant and service uses with a cumulative amount of 5,000 to 10,000 square feet of gross floor area; and a public pedestrian route along the waterfront that is wheelchair accessible and has an average width of between 10 and 12 feet. Twenty-five percent of the property would be required to remain as publicly accessible open space, down from as much as 33% in earlier plans.

The ordinance does not set a minimum or maximum number of housing units, but does require at least 12 percent of all housing be affordable under state income guidelines.

The public hearing was continued to Sept. 26 to allow officials to consider the public feedback and deliberate.

To see a full copy of the proposed zoning changes, related documents and other information, visit https://engagenewburyport.com/waterfront-west.