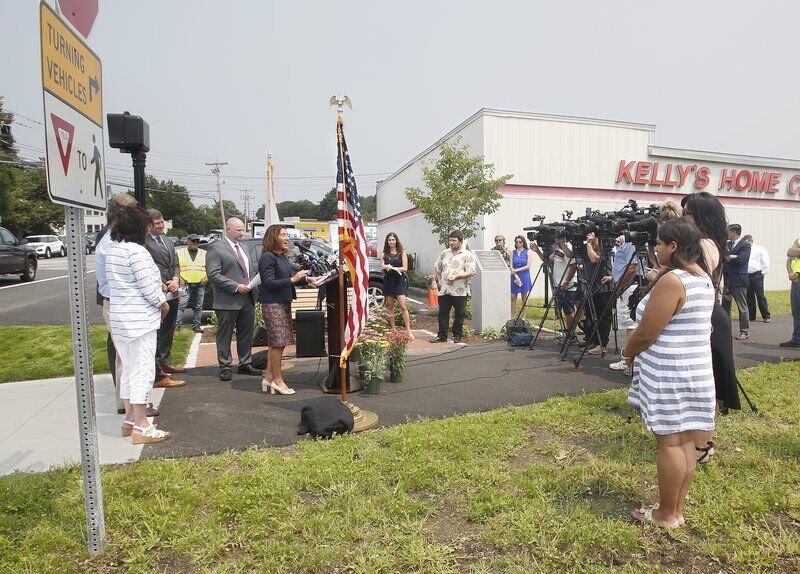 A crowd gathers Tuesday at the corner of State and Parker streets in Newburyport as Lt. Gov. Karyn Polito speaks at a press conference. The state is spending $6 million on street projects in 18 communities, including Newburyport. 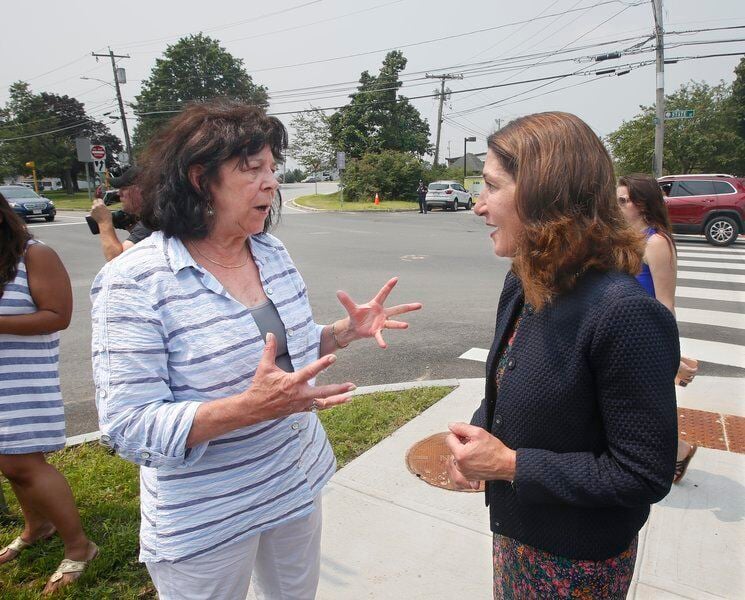 A crowd gathers Tuesday at the corner of State and Parker streets in Newburyport as Lt. Gov. Karyn Polito speaks at a press conference. The state is spending $6 million on street projects in 18 communities, including Newburyport.

NEWBURYPORT — The lieutenant governor joined the mayor on Tuesday in front of the newly completed shared use path on State Street to tout the effectiveness of the state’s Complete Streets grant program.

The city received $400,000 from the grant program to construct the path at the intersection of Route 1 and State Street, which recently saw the addition of a crosswalk and traffic lights.

Polito said the path is an excellent example of a “complete Complete Streets grant.”

“This solves a couple of problems, right?” Polito said. “It solves moving people, vehicles and cyclists around safely. And it is doing it in a very busy, congested area. At the same time, we are helping people to connect to our rail trail.”

Holaday told those in attendance Tuesday that the city had been looking to find a better way to get people across Route 1 at the traffic circle to the MBTA station, the newly opened Newburyport Crossing apartment complex and the beginning of the Clipper City Rail Trail.

“We are very grateful once again to the state for coming through and providing Newburyport the funding to be able to upgrade this area intersection and add another component to our rail trail which should be complete hopefully within the next year, year and a half,” Holaday said.

The mayor also spoke of a fatal accident when a truck struck and killed a 77-year-old pedestrian, Richard Barbieri, while he was crossing State Street in late 2016

“We are looking forward to finishing our work with MassDOT about how to get pedestrians across this very challenging rotary,” Holaday said. “But we have some good plans that I know that, ultimately, we will end up with a good design.”

Polito said the Complete Streets grant program is an excellent example of the state working with communities to build the infrastructure that people need.

“Basically, filling the gaps where our local officials want to do certain things but, because of inadequate resources or guidance from a state, they are unable to get these needs addressed,” Polito said. “This Complete Streets program is exactly one of those programs.”

Polito also said the Complete Streets grant program has already spent $61 million to fund 190 projects since its inception in 2016.

“It’s transformational,” she said. “Literally changing and addressing the needs, just like the one you are witnessing today.”

“It’s a program that can literally reach every community in our commonwealth,” she said.

Polito voiced her appreciation for Holaday who will not be running for reelection this fall.

“You leave a lasting imprint on your community and we are very proud of what you have been able to accomplish here,” Polito said.

“Behind me, I have one of the best mayors in the commonwealth who does an amazing job looking out for all of the constituents of her community,” Kelcourse said. “There isn’t a night that I leave my district office or I come back from the Statehouse that I don’t see that light on in her corner office.”