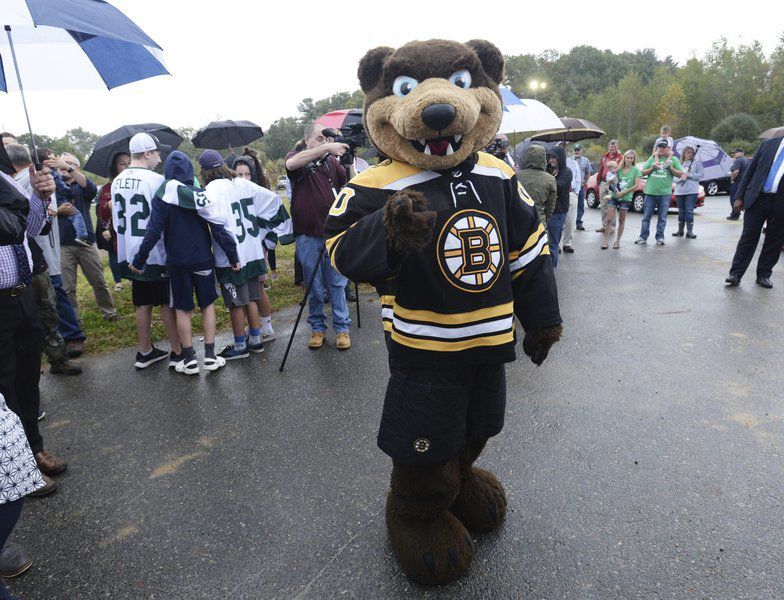 BRYAN EATON/Staff photoEven Blades, the Boston Bruins mascot, was on hand for the Maples Crossing groundbreaking. 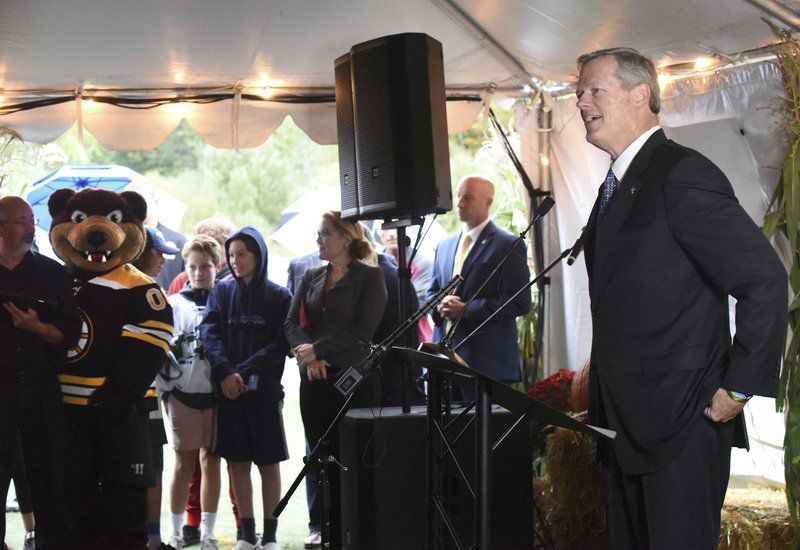 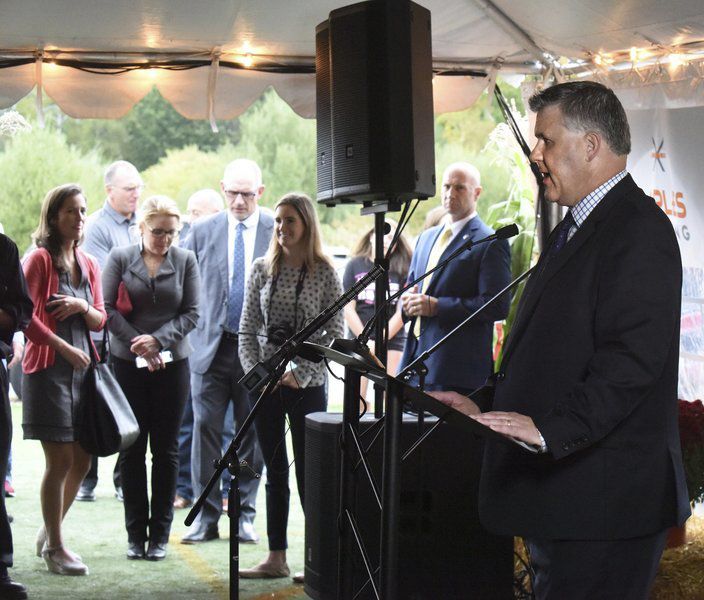 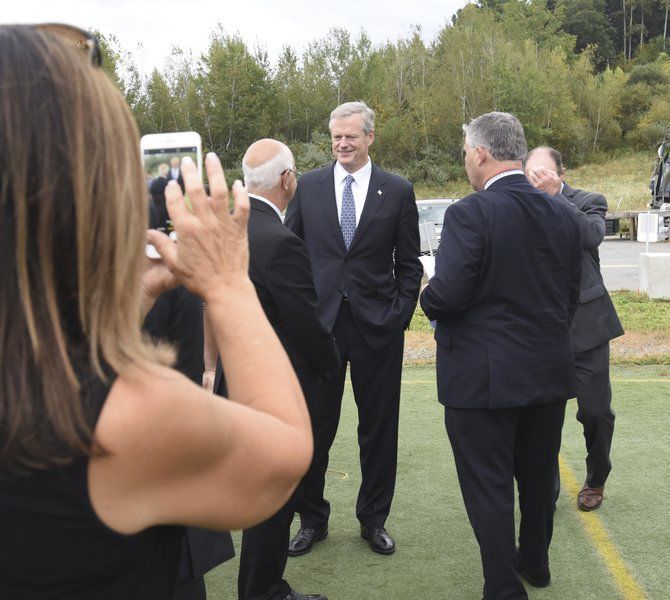 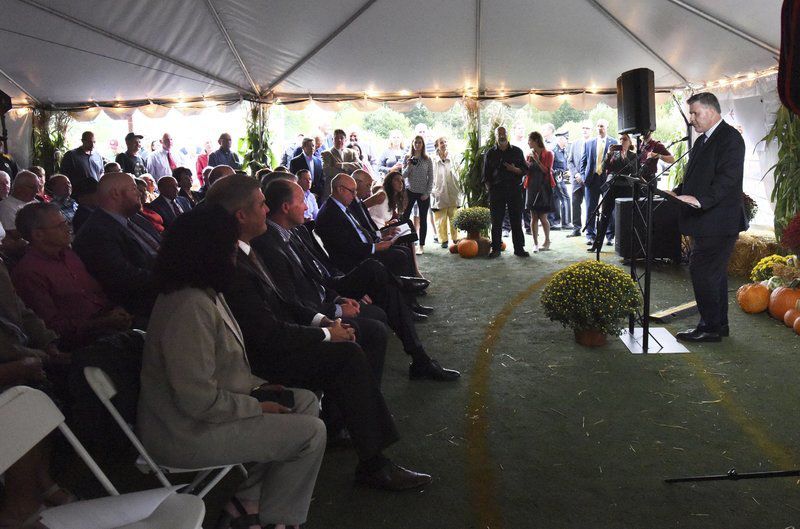 BRYAN EATON/Staff photoProject manager Mike Gorman greets the large crowd that turned out for the groundbreaking of a new sports complex on South Hunt Road in Amesbury.

BRYAN EATON/Staff photoEven Blades, the Boston Bruins mascot, was on hand for the Maples Crossing groundbreaking.

BRYAN EATON/Staff photoProject manager Mike Gorman greets the large crowd that turned out for the groundbreaking of a new sports complex on South Hunt Road in Amesbury.

AMESBURY — A steady rain couldn’t keep the enthusiasm at bay Thursday at a groundbreaking ceremony for the $70 million Maples Crossing sports complex.

Global Property Developers Inc. of Bridgewater will build the 410,000-square-foot, six-rink, ice hockey complex off South Hunt Road. Although construction is expected to start soon, an official opening date has not been announced.

“We first conceptualized this really over a cup of coffee,” project manager Michael Gorman said. “It was just an idea and as it grew, it became what it is today, which is fitness, health, wellness, mind, body, spirit, education, nutrition and six hockey rinks.”

Gorman told Amesbury Youth Hockey players that Global Property Developers is “going to stand by you, help you grow and help you succeed.“

Baker told the crowd about the days of his youth when he listened to Boston Bruins games on the radio while hiding under his bed covers in Needham.

“This is a spectacular way to honor what I would call one of the great heritage moments in Massachusetts,” Baker said. “Massachusetts and Minnesota, take your pick. But those are pretty much the two most hockey-mad states you’re going to find in the United States of America.

“By creating this kind of a sports tourism facility, recreation center, lifestyle center, health and wellness center with six rinks, you are saying that you want to make sure that kids are physically active,” he added. “They are engaged in team activities. They will have a chance to participate in what many people would call ‘our sport,’ which is hockey.”

Baker went on to say Maples Crossing will be about more than just hockey.

“This is the kind of enterprise and the sort of facility that people will build memories with for lifetimes” Baker said. “Families will grow up talking about stuff that they did here. High school kids will grow up talking about time they spent here. Adults will grow up developing friendships and relationships as they continue to be healthy and drive to stay healthy as they get older. It will be a tremendous asset to the community, to the region and to New England. Kudos to all of you for having the vision to think big and how to pull this off.”

The state awarded the city a $2.5 million MassWorks Infrastructure Program grant for infrastructure improvements in the South Hunt Road corridor that Kennealy spoke of Thursday.

“MassWorks funds roads and sewers and lights and things like that,” Kennealy said. “But what it really funds is community. What it really does is let a community say, ‘This project is important to us and is going to help us to advance to our goals and help us advance our aspirations. And do so in a way where there is true partnership between state government and local government, developers, community groups.’ It is a wonderful tool.”

Gray said Thursday was “the moment when our shared vision starts to become a reality.”

“Today marks a milestone in Amesbury’s history,” Gray said. “Today is the day that the next chapter of our story begins. At various times over our history, we have been a leader in nails, early ships, carriages and cars and hats. The next step is tourism, particularly sports tourism. This is the beginning of that next chapter.”

Global Property Developers President Steve Callahan said his company would not be where it is without help from the city and the state.

“Thank you Amesbury,” Callahan said. “Maples Crossing will be a lifestyle center of business, sports and entertainment like no other in New England.”