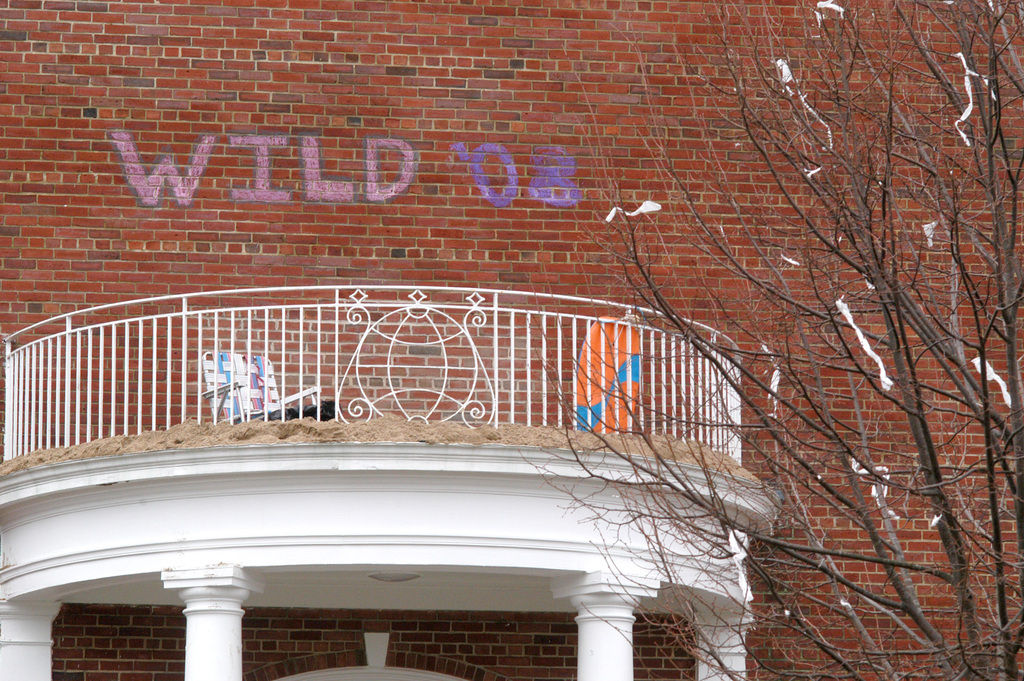 Students at Newburyport High School pulled April Fools' Day pranks, such as a beach scene set up atop an entranceway. 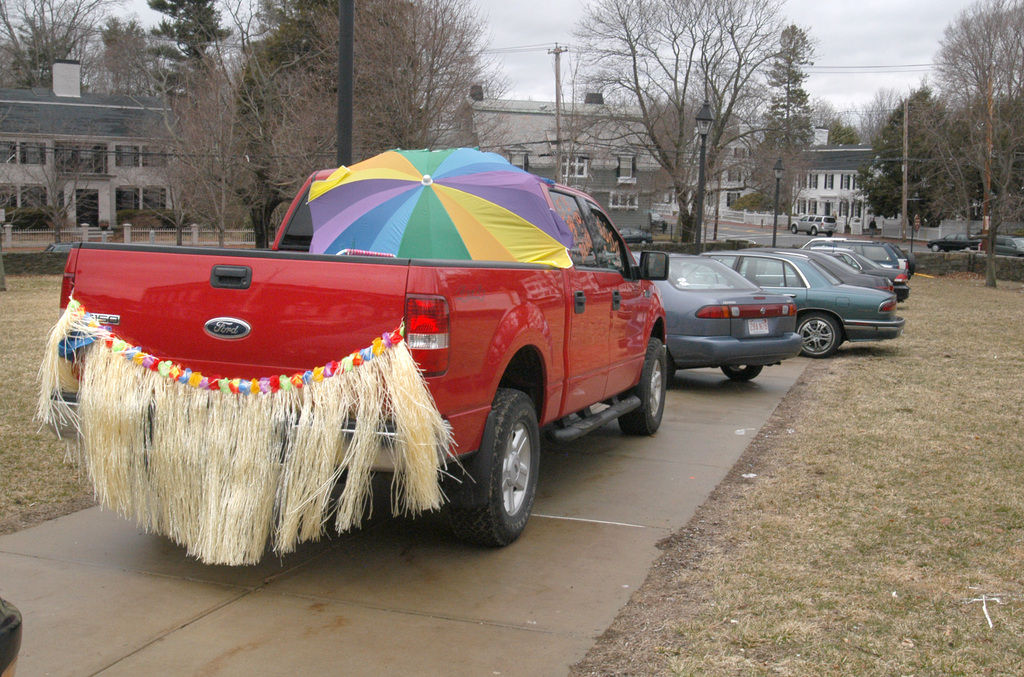 Cars were parked on the walkway up to Newburyport High yesterday. This truck has a beach motif. 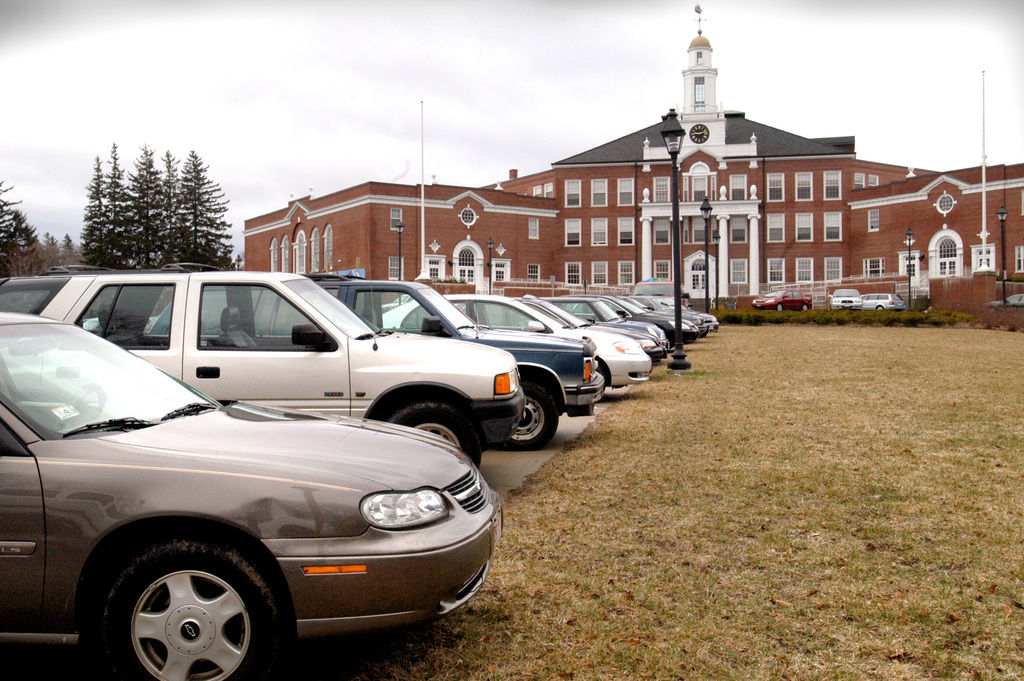 Cars were parked on the walkway up to Newburyport High School yesterday after students pulled pranks the night before.

Students at Newburyport High School pulled April Fools' Day pranks, such as a beach scene set up atop an entranceway.

Cars were parked on the walkway up to Newburyport High yesterday. This truck has a beach motif.

Cars were parked on the walkway up to Newburyport High School yesterday after students pulled pranks the night before.

NEWBURYPORT — By late yesterday morning, school officials had cleaned up the remnants of the Newburyport High School senior class' traditional April Fools' Day prank, but questions lingered over how well the situation was handled.

The activities started around 7 p.m. on Monday, when more than 75 students used toilet paper, shaving cream, contraceptives and a flounder to decorate the outside of the school, in defiance of Principal Michael Parent's warning not to let the prank get out of control.

Parent, senior class adviser Aileen Maconi, and other staff watched from inside the building Monday evening to make sure things didn't get too rowdy. But Maconi did have to go after some who threw snowballs at windows, and about 9 p.m., Parent ordered everyone to leave school grounds and said they'd be charged with trespassing if they returned. No one was allowed in the building.

"Some kids went overboard and it's unfortunate, but it presents a teaching opportunity for the whole community," said Nick deKanter, a School Committee member and parent of two high school students. "It's a fine line to draw between what is having fun and letting off steam, and what presents damage to property or danger to the students."

On Friday, about 90 students staged a sit-in protest in the school auditorium when they learned the administration had denied permission for a previously approved prank that entailed showing a movie to the graduating class for a portion of the day. Parent told a school assembly he would be enforcing the school hours Monday night and Tuesday morning and not opening the building early for students to set up for their prank.

Some seniors blamed the last-minute cancellation of the earlier prank, which student leaders had discussed with the administration, for spurring Monday's incident.

"Often when there is cooperation between administration and student leaders, it works well and everything goes fine," Superintendent Kevin Lyons said. "If that breaks down, there is going to be a disagreement and miscommunication. In this case, a small minority of students took it a little too far."

"It's important to remember this was not the whole senior class, and in fact most are not pleased with it," deKanter said. "It puts (the seniors) in a bad light and puts the more traditional senior activities at risk."

Yesterday it was unclear what consequences students would face in connection with the prank. A tight-lipped Parent would only say, "There are some individuals that I have to deal with, and I will do that."

Lyons also said he did not know the specifics about any disciplinary action taken against students who participated.

While the majority of the hijinks went on in front of the school Monday night, it seemed some students arrived at the building early yesterday to decorate the halls with Easter eggs and streamers.

Cars could be seen parked along the two driveways leading to the school building. Prominently displayed near the school steps was a beach scene complete with sand and a beach chair.

"(What was in the school ) was mainly in the halls, parts of the schools had stuff, parts didn't," Parent said. "It was a combination of both areas."

Students at the scene on Monday night said they had been told they could participate in a prank outside of the school from 6 to 10 p.m., though Maconi said that was a rumor that had started at the student assembly Friday and was not school policy.

"Students were choosing to hear what they want," Maconi said on Monday night, noting students assumed they had permission to perform a prank.

Yesterday deKanter said the administration and faculty did a good job drawing the line between what is traditional versus what is damaging.

"I think Mike and Aileen took the steps necessary to control the prank and now corrective steps must be taken," deKanter said. "But I think the administration did a fine job."

Lyons hopes yesterday's prank is not foreshadowing of the rest of senior activities.

"Hopefully now we are beyond April 1, and we are looking forward to the warmer weather and a very good and solid ending of our seniors' careers," Lyons said. "We have a high expectation for the remainder of the school year and the students."