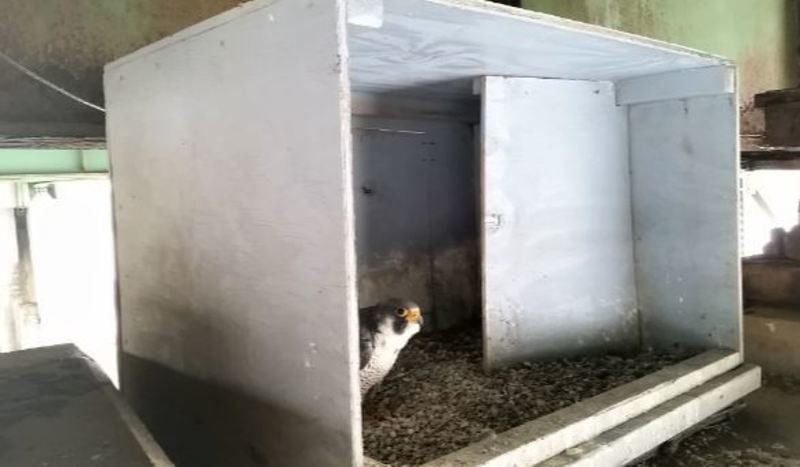 Courtesy photoA new wildlife monitoring camera was recently installed by the Massachusetts Department of Transportation, through a partnership with MassWildlife, on the Gillis Bridge in Newburyport to monitor peregrine falcons in the nesting box. 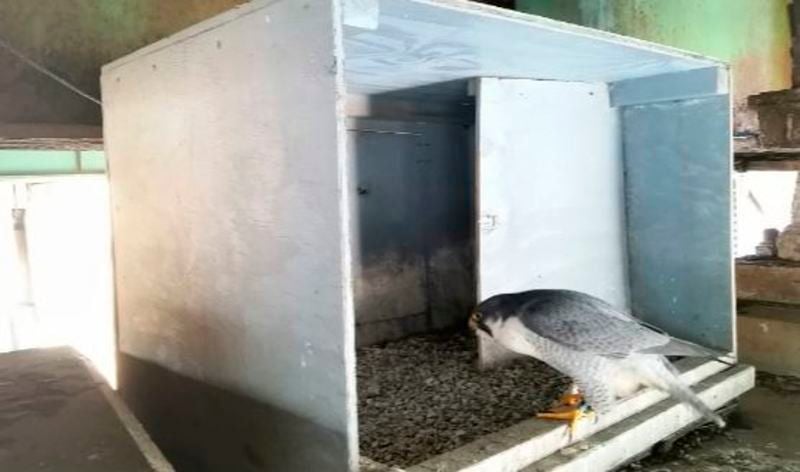 Courtesy photoA peregrine falcon is photographed in the Gillis Bridge nesting box, built by MassWildlife and installed by the Massachusetts Department of Transportation in 2017.

Courtesy photoA new wildlife monitoring camera was recently installed by the Massachusetts Department of Transportation, through a partnership with MassWildlife, on the Gillis Bridge in Newburyport to monitor peregrine falcons in the nesting box.

Courtesy photoA peregrine falcon is photographed in the Gillis Bridge nesting box, built by MassWildlife and installed by the Massachusetts Department of Transportation in 2017.

NEWBURYPORT — A new wildlife monitoring camera, set up to watch a peregrine falcon nesting box under the Gillis Bridge, aims to capture some still moments in the life of the world's fastest bird.

The nesting box was built by the Massachusetts Division of Fisheries and Wildlife and installed by the state Department of Transportation in 2017. MassWildlife and MassDOT monitor nine other falcon nesting boxes statewide.

In building these nesting boxes, officials have been able to protect eggs and chicks from harsh weather and other elements, furthering conservation efforts.

Marion Larson, chief of information and education at MassWildlife, said the nesting boxes provide "a little bit better shelter than say if they were to have a nest of gravel on an I-beam."

Earlier this year, prior to nesting season, MassDOT installed the camera to take photos of the box every 15 minutes to assist in conservation efforts.

In addition to seeing photos from the camera online, the public can see the falcon box from the Clipper City Rail Trail under the south side of the bridge, although binoculars are recommended.

Three eggs were laid by a falcon at the nesting box in Newburyport, according to a statement from the two agencies last week. Officials believe at least one egg has hatched because "an adult falcon was recorded feeding a presumed chick in the nest box."

"We can watch the progress of that particular family," Larson said. "It's a lot easier to monitor how many eggs were laid, how many hatched, and whether or not all of them survived enough to fledge or fly from the nest."

Larson said this is a "cool" opportunity for the public to see a world they might not otherwise have the chance to witness.

The agency, which is "responsible for conserving, restoring and maintaining wildlife and their habitats," will likely band the newborn falcons next month, she said. By putting metal bands on the birds' legs, officials can keep track of population counts and survival rates.

In 1999, following conservation efforts around the country, the peregrine falcon was removed from the federal Endangered Species Act list. Last year, the bird was downgraded from "threatened" to "special concern" on the state endangered species list.

In a statement announcing the new camera Thursday, Highway Administrator Jonathan Gulliver expressed gratitude for the partnership between MassDOT and MassWildlife.

"MassDOT engineers and scientists collaborate on a number of initiatives to protect wildlife, including nesting boxes, and these steps help our friends in the natural world while at the same time protecting our infrastructure and in some cases keep drivers safe, as in the case of wildlife travel tunnels under our roadways," he said.

"This is a wonderful example of how the two agencies work together to achieve goals for both rare species, conservation goals and transportation infrastructure planning and maintenance needs," MassWildlife Director Mark Tisa said.

Images from the Gillis Bridge peregrine falcon camera can be found at www.senserasystems.com/public/project/gillisbridgeperegrinecamera.