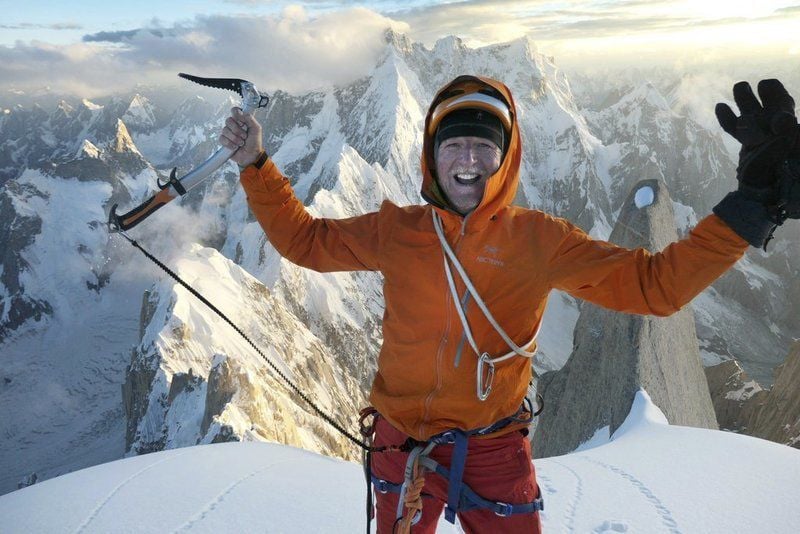 Courtesy photo/Chris WrightMarkey Richey of Plum Island and his team of mountain climbers were the first to reach the summit of 23,000-foot Link Sar. 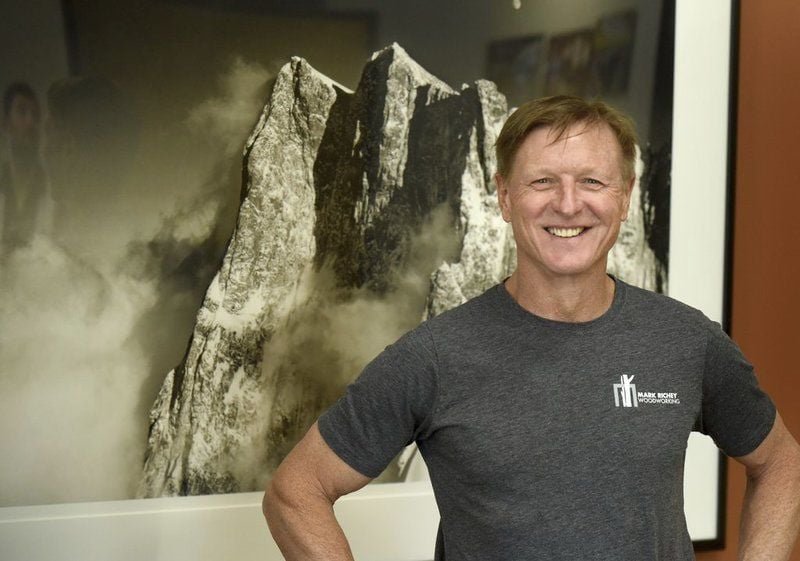 BRYAN EATON/Staff photoMark Richey, owner of Mark Richey Woodworking in Newburyport, stands in front of a photo of the Grandes Jorasses on the border of France and Italy. Richey recently became the first to reach the summit of Link Sar in Pakistan. 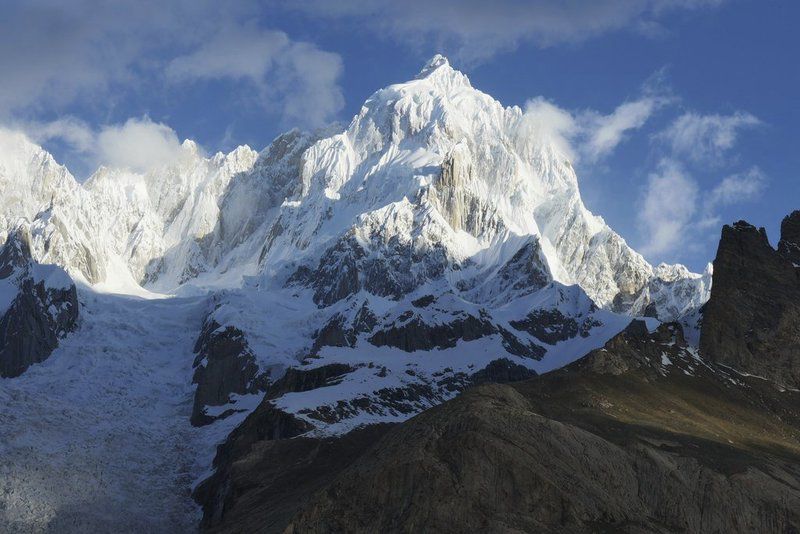 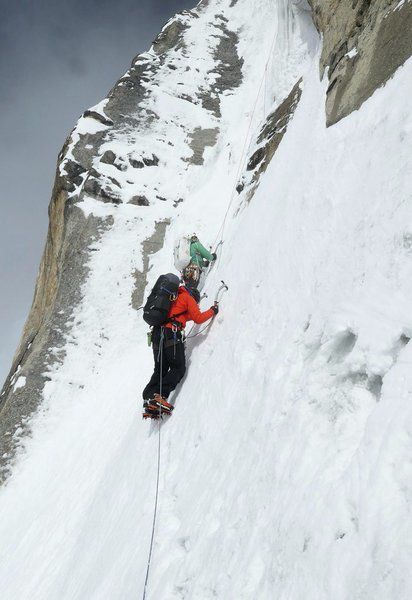 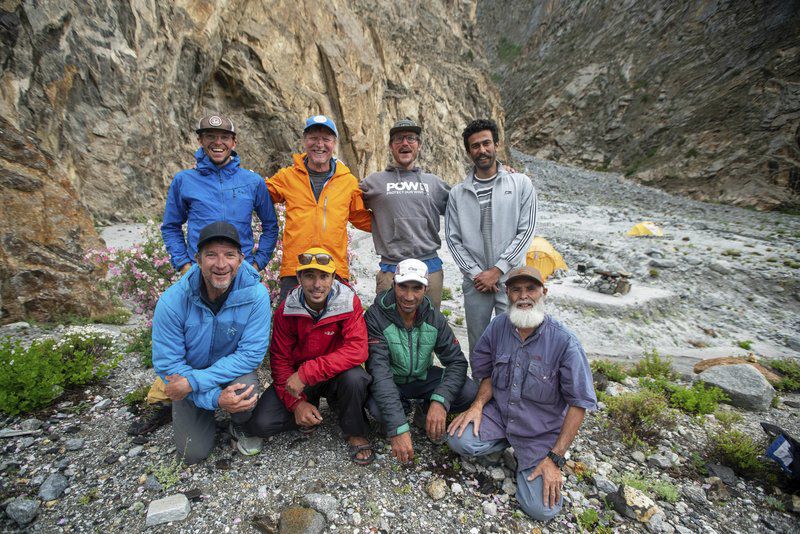 Courtesy photo/Chris WrightMarkey Richey of Plum Island and his team of mountain climbers were the first to reach the summit of 23,000-foot Link Sar.

BRYAN EATON/Staff photoMark Richey, owner of Mark Richey Woodworking in Newburyport, stands in front of a photo of the Grandes Jorasses on the border of France and Italy. Richey recently became the first to reach the summit of Link Sar in Pakistan.

NEWBURYPORT — Plum Island resident Mark Richey made mountain climbing history last month as the first man to reach the peak of Link Sar, a 23,100-foot peak in the Karakoram Range that borders Pakistan, India and China.

"We really didn't know if we were going to summit until literally, those last moments," Richey said. "The summit was hidden from view but once we were on top, it was as if the whole world was below us."

Richey, 61, fell in love with rock climbing at the Quincy Quarries Reservation at the age of 15. Over the years, he has made more than 15 expeditions to the Himalayas including in Pakistan, Nepal, Tibet and India.

He has climbed all over the Alps, including the north faces the Eiger and the Matterhorn, and mountains in Peru, Chile and Argentina. Richey also climbed to the summit of Mount Everest on his 33rd birthday in 1991.

Although many expeditions have attempted to climb Link Sar since the mid-1970s, Richey was part of a four-man team that included Steve Swenson, Chris Wright and Graham Zimmerman who were the first to reach the summit Aug. 5.

While Swenson tried to reach the top twice before and Wright and Graham had also made an attempt, this summer's climb represented Richey's first.

"I was the newcomer to this group," Richey said. "I got the easiest ride in a way because I only had to go there once. But I am very grateful to have had such an incredible team. These are some of the best and most experienced climbers in the country. To be invited on this expedition with these guys was not only a real honor but a real privilege as well."

The four climbers left for Pakistan on June 4 and arrived at their first base camp 12,000 feet below the summit by the middle of the month. The team began getting acclimated to the thin air at that altitude by traveling back and forth over the Kondus Glacier to their advanced base camp over the course of about a month before making their ascent by early July.

Richey and Swenson are in their 60s; Wright and Zimmerman are in their 30s and would often lead the way. The team eventually made its way to its fourth base camp by early August.

Now at 6,500 meters – Link Sar is about 7,040 meters high – the team members pitched tents and prepared for their presummit.

"We were roughly 500 meters short," Richey said. "We got up and got moving at about 5 a.m. and could see where the summit was. We were really excited and hoping this was going to go pretty quickly. We felt that we had it in the bag."

Although the start went well, the climb slowed dramatically when Zimmerman took the lead about noon.

"He was making good progress and headed toward a fin of snow and ice that was looking like it was going to be the best route up," Richey said. "All of a sudden, I heard a scream from Chris, 'Avalanche!'"

The next thing Richey knew, he was hit by a wall of cold, wet snow that he said felt more like concrete.

"The force was intense," he recalled. "If we hadn't been tied to the mountain, we would have been thrown off and fallen to our deaths."

While the avalanche lasted less than five seconds, Richey and his team noticed they were no longer a foursome.

"We looked around and Graham was nowhere," Richey said. "My first thought was he is either badly injured or dead. We screamed and screamed, and there was no response. We learned later that he had fallen 150 feet and was caught by his rope."

Eventually, Swenson made his way over to Zimmerman’s rope to discover his friend was dangling, awaiting help in a dark gully.

“We just assumed we were going down, that this was the end," Richey said. "We had gone so far and worked so hard. All of us had given everything we had. The summit was right there, only 150 meters above us. That's less than 500 feet vertically."

Although few people would be able to continue after such a catastrophic event, Zimmerman pulled himself back up and told the team it was time to continue toward the summit.

"He couldn't lead anymore but if we were willing, he wanted to keep going," Richey said. "There aren't many people who would say that."

The team eventually reached the point where Zimmerman had been before the avalanche and crawled, inch by inch, up deep, vertical, unpacked snow.

"(Wright) was digging so far down that he was up to his helmet in snow," Richey said. "He got to a point where he called down and told us he couldn't go any further. I thought we weren't going to make it. Sometimes, that just happens."

But Wright didn't feel the climb was over and Zimmerman told Richey to climb up to him and confirm they were as far as they could go. Slowly, Richey began crawling through the snow, digging a 6-foot-deep trough along the way.

"I was chimneying against the wall of this tunnel I was building," Richey said. "I was moving at an absolute snail's pace, but I was making some progress and I had used this technique in Peru."

With the sun beginning to make its slow descent into night, Richey reached a point where the soft snow beneath him began to firm.

"I pulled up onto the most perfect summit that you could imagine," Richey said. "It was like the top of a castle, floating in the mountains. It was about 25 feet long, maybe 12 feet wide. The snow was firm up there and there was no question. It was one of the most beautiful summits I have ever reached."

Although Richey reached the summit in the midst of gray, cloudy weather, he said the conditions began to clear and the setting sun soon appeared.

"It was almost as if by magic," Richey said. "The whole range begin to turn orange with alpenglow. We could see deep into Karakoram and all of the giants, K2 and Gasherbrum and Saltoro Kangri were in the distance. Then I heard, from beneath me, 'Is there room for us up there?’ There certainly was."

Soon Richey was joined by Swenson, Wright and Zimmerman as the first four people to the reach the summit of Link Sar.

"We spent less than a half an hour on top," Richey said. "But it was one of the most beautiful half hours I've ever had."