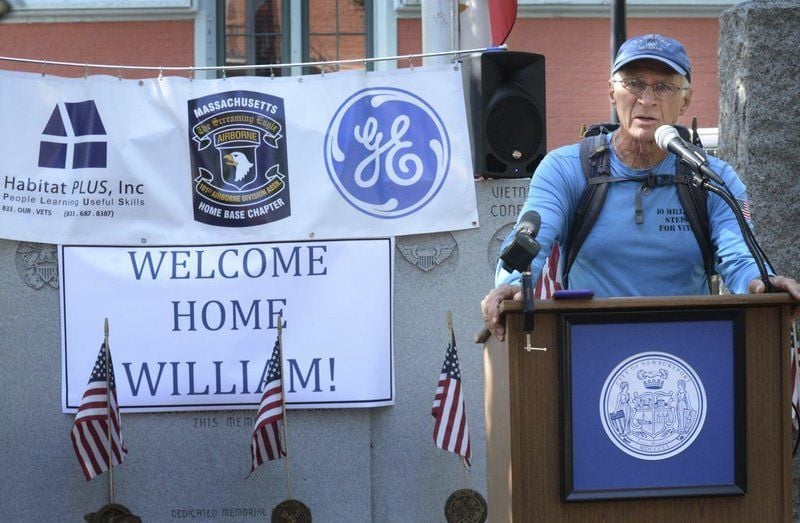 William Shuttleworth addresses those attending a ceremony welcoming him home for his cross country walk to bring attention to the plight of veterans. 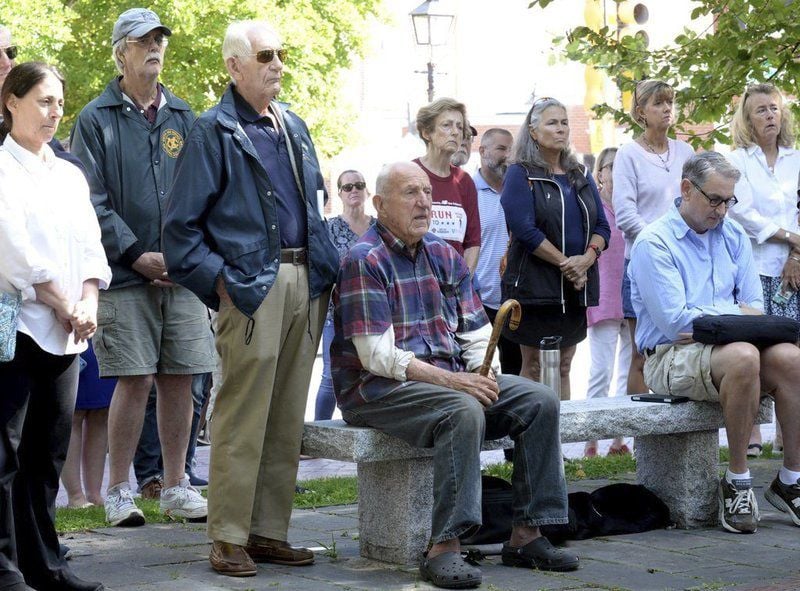 BRYAN EATON/Staff photosAttendees listen to William Shuttleworth as he advocates for the plight of veterans in need. 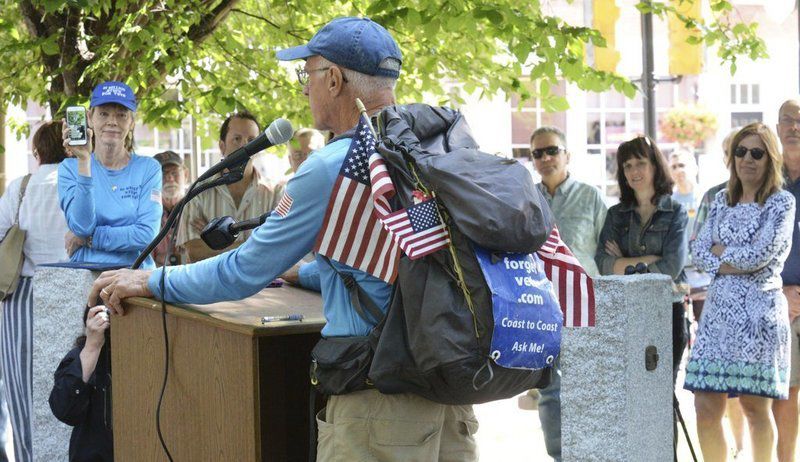 BRYAN EATON/Staff Photo. William Shuttleworth speaks to those in attendance as his wife, Patty, left, records. Shuttleworth is wearing the flag-adorned backpack he wore in his walk across America. 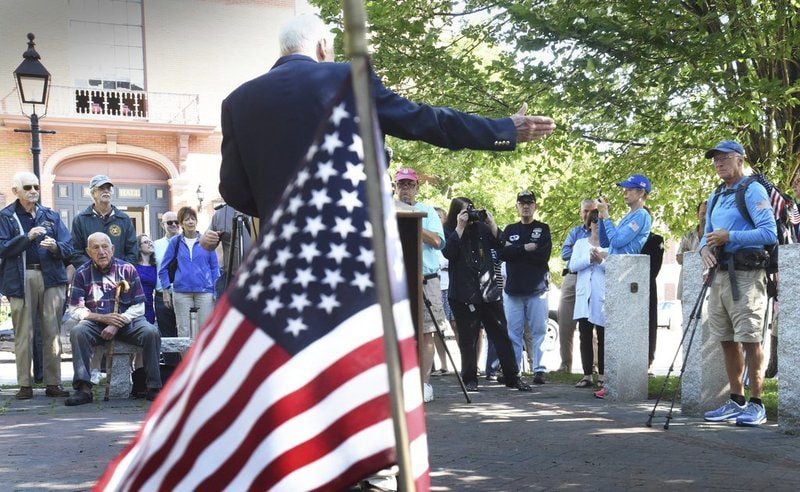 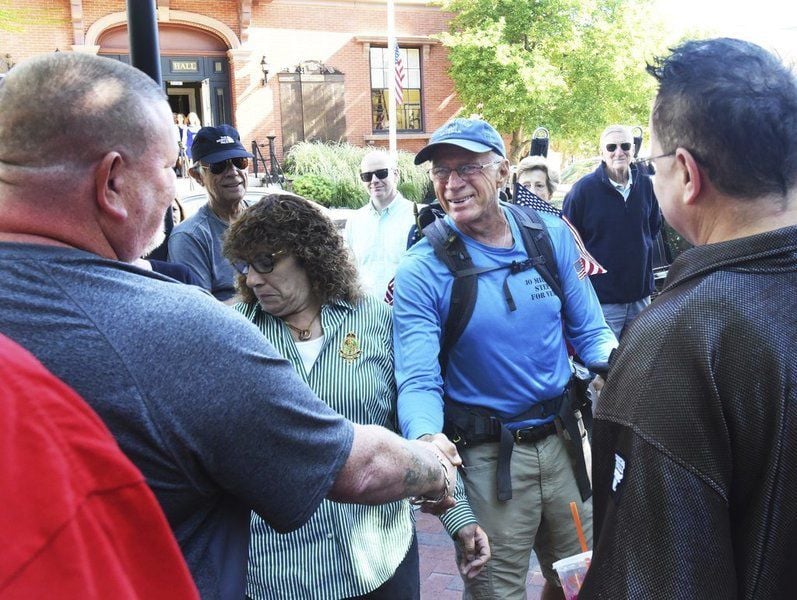 BRYAN EATON/Staff PhotoWilliam Shuttleworth is greeted by people as he arrives at a ceremony welcoming him home from his cross-country walk to bring attention to the plight of disabled and homeless veterans.

William Shuttleworth addresses those attending a ceremony welcoming him home for his cross country walk to bring attention to the plight of veterans.

BRYAN EATON/Staff photosAttendees listen to William Shuttleworth as he advocates for the plight of veterans in need.

BRYAN EATON/Staff Photo. William Shuttleworth speaks to those in attendance as his wife, Patty, left, records. Shuttleworth is wearing the flag-adorned backpack he wore in his walk across America.

BRYAN EATON/Staff PhotoWilliam Shuttleworth is greeted by people as he arrives at a ceremony welcoming him home from his cross-country walk to bring attention to the plight of disabled and homeless veterans.

The city celebrated the return of William Shuttleworth on Thursday morning after his 3,000-mile walk across the country in support of the nation’s veterans.

Shuttleworth, a 71-year-old Market Street resident and Air Force veteran, left Newburyport on May 15 with a 25-pound backpack and two trekking poles, kicking off a coast-to-coast walking tour to raise public awareness about the health care, housing and financial issues facing men and women who served in the U.S. military.

The walk, which he dubbed Vets Don’t Forget Vets, received national media attention and wrapped up Sunday in San Diego, California. At last count, Shuttleworth had raised more than $59,000 for the cause.

On Thursday, Shuttleworth was wearing his American flag-decorated backpack again as he greeted dozens of friends, veterans, admirers and supporters who turned out for the ceremony in front of City Hall, which was met with warm, late summer weather and sunny skies.

Before taking the podium, Shuttleworth was welcomed home by veterans agent Kevin Hunt, City Clerk Richard Jones, and City Council President Barry Connell, all of whom touted his dedication and physical and mental strength. He was also congratulated by Sal DeFranco, a Navy SEAL who was discharged after sustaining a brain injury in 2008 and went on to found the Haverhill-based company Battle Grounds Coffee.

In addition, a representative from Congressman Seth Moulton’s office presented Shuttleworth with a congressional citation for his achievement.

In his speech, Shuttleworth recapped his trip, beginning with its origins in his stay at a California campsite in 2018, during which he met many homeless veterans facing serious hardships. That experience inspired him to raise nationwide awareness.

He admitted that the 3,000-mile walk took some extremely hard work and discipline, especially during its final 10-day stretch in southern California where temperatures climbed to 114 degrees.

“Walking 30 miles (per day) in the desert where it was just grueling. Not a tree in sight, nothing but cactus and sand blowing in your face, exfoliating your skin at 50 miles an hour,” said Shuttleworth, recounting elements of the trip’s last leg. “It brings everything out inside of you that you didn’t know you had.”

Through even the hardest parts of his journey, Shuttleworth said he was propelled by his motivation to help struggling veterans, many of whom he said are suicidal, homeless or in danger of becoming homeless.

“I walked for 62,000 veterans that are homeless today, and 1.5 million that are at risk of becoming homeless,” said Shuttleworth. “All I can say is that they weren’t homeless when they went in service and signed on the dotted line to defend this country.”

Above all, Shuttleworth said, the most prominent issue faced by veterans is a lack of decent health care. He emphasized that one of his main goals is to help veterans get the same health plans as members of Congress, which he believes can be achieved by putting more veterans in elected office and electing politicians who support veterans’ issues.

“I hear a lot of rhetoric across the country from people who are trying to represent us, but I actually haven’t heard what they have done,” said Shuttleworth. “I want a congressman who will actually put his money where his mouth is and do something for veterans.”

Shuttleworth emphasized that he still hopes to reach his $100,000 fundraising goal to support disabled veterans, and that he is still accepting donations via his GoFundMe.com page.

Shuttleworth also shared some of his stories from the road, including an account of how a man came to his rescue in the midst of a serious rainstorm and tornado warning, and another of how an 8-year-old boy named Noah raised $1,000 for Vets Don’t Forget Vets. When Shuttleworth arrived in San Diego, he was surprised to see that Noah’s mother had flown him from their home in Illinois to join Shuttleworth for the last mile of his trip.

Overall, Shuttleworth said the walk affirmed his belief in both the beauty of the American landscape and the good nature of the country’s people who welcomed and supported him along the way.

“America is a gorgeous, gorgeous country. I’ve seen it all,” he said, recounting how the sight of the Rocky Mountains from a pedestrian view brought “fantastic tears to my eyes.”

“America starts with its ordinary American people that get up every day, silent American heroes,” he continued. “Believe me, folks. You put these shoes on and you walk across America, and you see America the beautiful, and it starts with its people.”

And while the trip’s end was bittersweet, Shuttleworth seemed glad to be back home.

“People always say,’well what was your favorite town that you walked in,’ and I say that my favorite town was the town I walked out of — Newburyport,” he said.