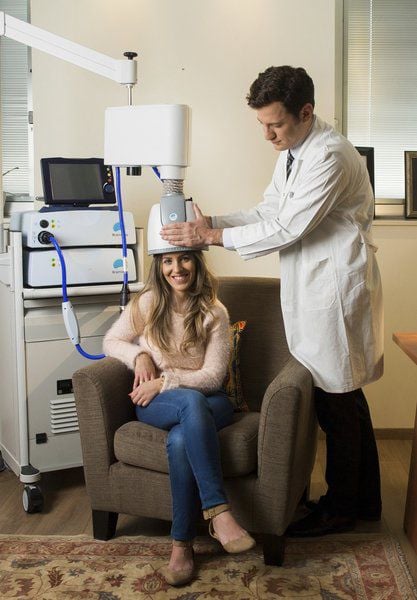 COURTESY PHOTO  A demonstration of the technology known as dTMS, or deep Transcranial Magnetic Simulation. 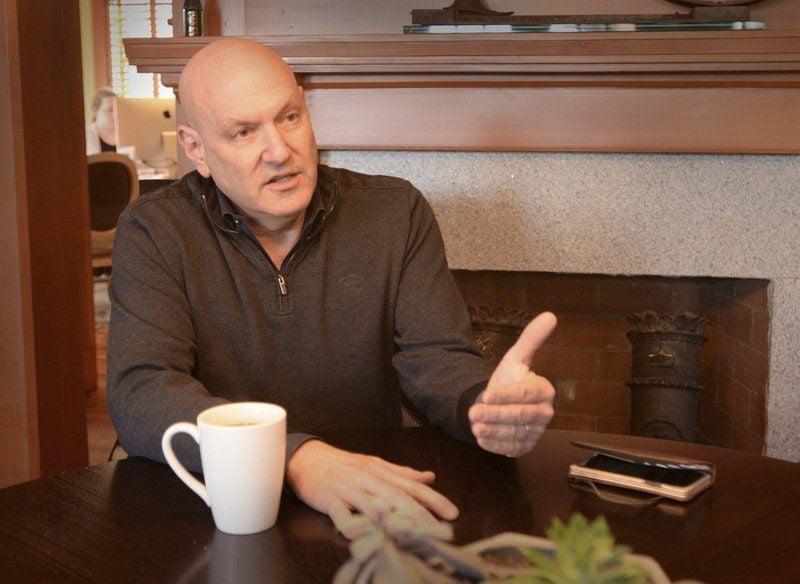 BRYAN EATON/Staff photoKeith Ablow of New England TMS on Water Street in Newburyport practices dTMS, or deep Transcranial Magnetic Simulation. The procedure involves a machine which “is designed to stimulate under-active areas of the brain.”

COURTESY PHOTO  A demonstration of the technology known as dTMS, or deep Transcranial Magnetic Simulation.

BRYAN EATON/Staff photoKeith Ablow of New England TMS on Water Street in Newburyport practices dTMS, or deep Transcranial Magnetic Simulation. The procedure involves a machine which “is designed to stimulate under-active areas of the brain.”

NEWBURYPORT — Depression has been part of American medical culture for as long as records have been kept.

Keith Ablow, a veteran psychiatrist, recently added to his toolkit for treating it, introducing a novel technology billed as a “non-medicinal treatment for depression.”

“This technology can be used instead of medication,” said Ablow, who is also a well-known author. “It can be appropriate for those who are profoundly depressed or for whom other solutions have not been successful.

“This is a well-tolerated solution that the data shows is very effective.”

His mini-practice is known as New England TMS, and his office is one of the few in northern New England to be employing the technology, known as dTMS, or deep Transcranial Magnetic Simulation.

The treatment involves a machine which “is designed to stimulate under-active areas of the brain.”

The procedure is performed in an office on Green Street, although Ablow still maintains is “traditional” psychiatric practice on Water Street.

The patient is fitted with a padded helmet-like device attached to a console “to provide non-invasive brain stimulation to neurons within a targeted area of the brain.”

No sedation is required, and the patient is awake and alert during treatment sessions.

Ablow said magnetic stimulation is delivered to the left prefrontal cortex of the brain, similar to the magnetic process used for an MRI. The stimulation activates nerve cells in the brain, and “this relieves symptoms of depression, anxiety and many other maladies,” according to Brainsway, the company that produces the hardware.

“It can address treatment-resistant depression, post-traumatic stress syndrome and even anxiety about the inability to stop smoking,” said Ablow.

The technology is patented and registered by the National Institutes of Health, according to New England TMS.

The technology has been proven in more than 60 clinical tests worldwide, said Ablow.

The psychiatrist said the recommended treatment is daily sessions for four to six weeks.

After a 30-minute treatment, the patient can go back to work or home.

Ablow has been an innovator and a high-visibility medical professional during his two decades in this area.

A graduate of Brown University (with highest honors) and Johns Hopkins University Medical School, he completed his training at Tufts/New England Medical Center.

He has authored 16 books, and has written frequently on “new topics in psychiatry” for newspapers including the New York Times and the Washington Post. Ablow is currently a contributor to Fox-TV news.

The doctor said a full treatment would cost $15,000, adding that most insurance policies cover at least half the series of procedures. He said his office works with patients to enable them to afford the treatment.

Company literature states that the most common side effects are headaches and local discomfort, “both usually temporary and mild.”

Other side effects may include muscle twitching and jaw pain.

Ablow cited his concern for confidentiality, but his office, which has about 35 patients, released these remarks from two patients.

A patient identified as Brian, from Maine, said, “I am in a much better place now than when I began. Thank you to a great team of people to work with!

A patient identified as Mary, from Massachusetts, said, “I have had such a great experience with New England TMS. When I came on the first day, I was nervous and had a lot of questions which the team was able to answer and put me at ease.

“They made sure I was comfortable with the settings on the TMS machine and the rate at which I progressed to a therapeutic level. Each time I came I felt like it was a nurturing environment.”

Dyke Hendrickson can be reached at 978-961-3149 or dhendrickson@newburyportnews.com.