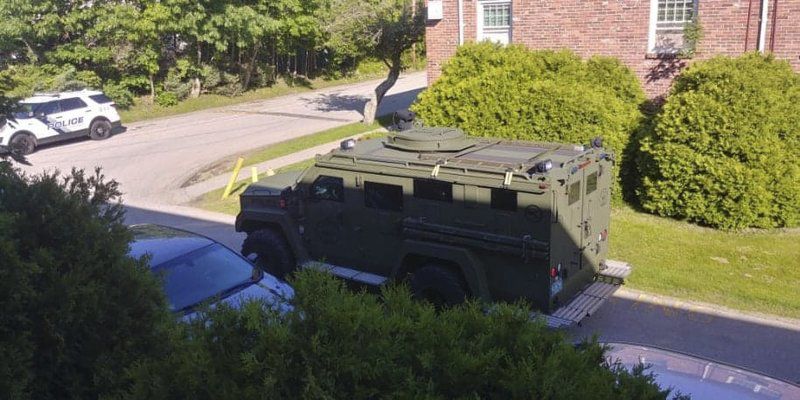 COURTESY PHOTO . This photo taken by a person visiting the Carriage Hill Estates apartments on Friday shows a military-style armored vehicle used during a police raid on an apartment. 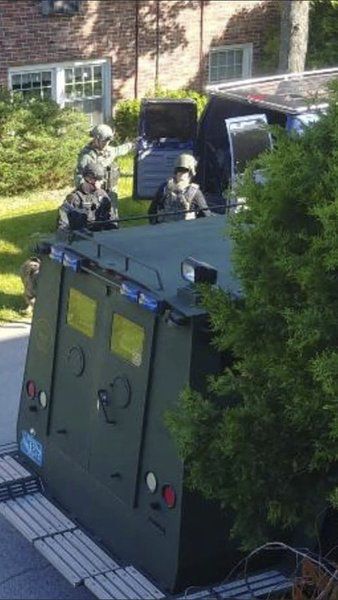 COURTESY PHOTO . This photo by a person visiting the Carriage Hill Estates apartments on Friday shows police in body armor during a raid of an apartment in the complex.

COURTESY PHOTO . This photo taken by a person visiting the Carriage Hill Estates apartments on Friday shows a military-style armored vehicle used during a police raid on an apartment.

COURTESY PHOTO . This photo by a person visiting the Carriage Hill Estates apartments on Friday shows police in body armor during a raid of an apartment in the complex.

Around 6 p.m. Friday, apartment complex residents looked out their windows to see about 15 heavily armed and armored police officers coming out of armored trucks and entering one of the buildings. Several photos of the raid were posted on social media.

According to Amesbury police Lt. Kevin Donovan, most of the officers were affiliated with the Northeastern Massachusetts Law Enforcement Council which was called in to assist local police as they executed a search warrant there.

NEMLEC is comprised of Essex County and Middlesex County police officers, along with two sheriff departments, and serves as a regional resource to assist local police when they are facing high-risk situations. It is based in Wilmington.

Donovan said officers focused on items inside the dwelling and not a specific person. But he wouldn't say whether police` found what they were looking for or what those items might be.

"The matter is still open," he said.

When a reporter visited Newburyport District Court Monday to see the Amesbury Police Department's search warrant application, a clerk said police have yet to return the warrant to court.

Once a search warrant application is served, police have seven days to return it to District Court. Once that happens, it becomes a public document and can be reviewed by anyone. According to police, the warrant should be returned within the next day or two.

Carriage Hill Estates consists of several apartment buildings and is located across from Town Park off Friend Street.