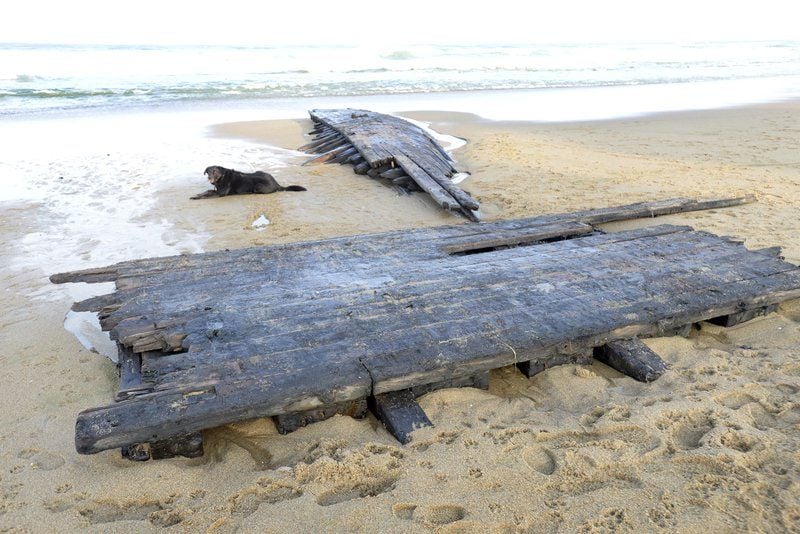 BRYAN EATON/Staff PhotoTwo pieces of what appear to be from the same ship washed up on Salisbury Beach near access way 7. It could be a shipwreck from the 19th century. 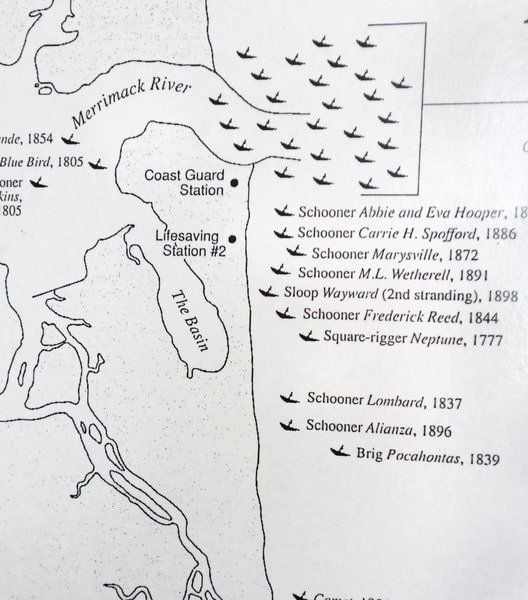 This map at the Custom House Maritime Museum shows shipwrecks at the mouth of the Merrimack River. 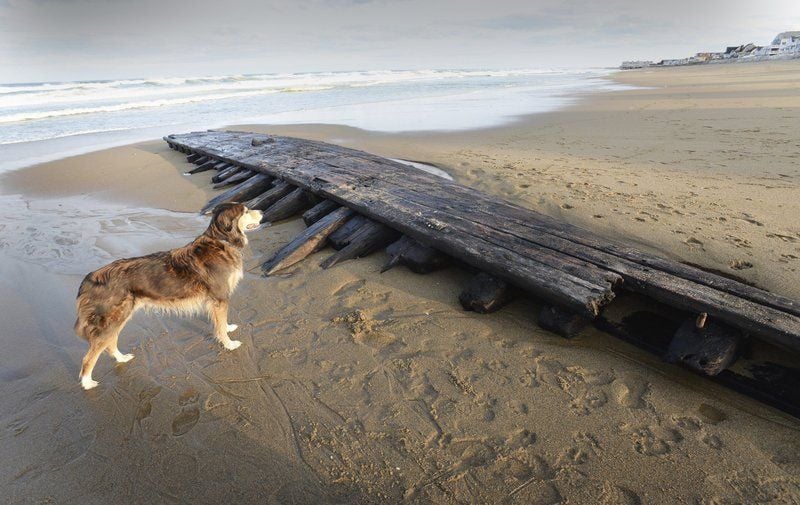 BRYAN EATON/Staff Photo. What appears to be a schooner, some believe from the 19th century, has washed up at Salisbury Beach.

BRYAN EATON/Staff PhotoTwo pieces of what appear to be from the same ship washed up on Salisbury Beach near access way 7. It could be a shipwreck from the 19th century.

This map at the Custom House Maritime Museum shows shipwrecks at the mouth of the Merrimack River.

BRYAN EATON/Staff Photo. What appears to be a schooner, some believe from the 19th century, has washed up at Salisbury Beach.

Take a walk along Salisbury Beach and there’s no telling what you’ll find — like the partial remains of a ship that foundered and sank off the coast centuries ago.

Shore ramblers taking in the northern end of the beach at low tide recently discovered two substantial pieces of an old wooden ship washed up just beyond the waves near beach access way 7.

During the era of sailing ships, shipwrecks off this coast were not rare, according to Michael Mroz, executive director of the Custom House Maritime Museum in Newburyport.

“The crescent of coastline that stretches from Boar’s Head in Hampton to Halibut Point on the tip of Cape Ann has been renowned for catching ships,” Mroz said. “We have a map that sites the known shipwrecks in this area.”

So pronounced is Massachusetts’ shipwreck history the state has a specific office to deal with it: the Board of Underwater Archaeological Resources. Its director and chief archaeologist, Victor Mastone, drove up to see the find for himself, after Salisbury Beach State Reservation manager Mike Magnifico called him about the exciting debris.

Unfortunately, by the time Mastone arrived, the incoming tide had covered up the artifacts. But, after looking at the pictures The Daily News sent him, he believes the remains could be from a 19th-century ship that went down somewhere off the coast of Salisbury or even Seabrook.

“If you’re a gambler, you could put a little money on the fact that this is from a schooner; it’s a good, educated guess,” Mastone said. “Schooners were the tractor-trailers of cargo ships in the 19th century. Most around here were carrying lumber, except the Jennie Carter was carrying granite when she went down (in Salisbury waters).”

An archaeologist for 40 years, 28 of them with the BUAR, Mastone said from what he saw in the pictures of the curve of the longest piece of debris makes him think it could have come from above the turn of the bilge (the lower portion) of a schooner, above the keel, or spine of the ship. But, he cautions, more investigation is needed before he can make a more educated evaluation.

From what is visible in the photos, the wood appears to be in pretty good shape, without so much as barnacles attached. Mastone said that’s not uncommon, even for a wooden ship that went down more than 100 years ago.

He’s hoping to get back to Salisbury at low tide to gather more evidence to use to help write the history on the pieces, which, by law, are the property of the state of Massachusetts.

Yet, the state won’t remove the two pieces to store or place them in a museum, he said.

“To do that we’d have to preserve the wood,” Mastone said. “That type of conservation takes years and a facility to do it in, and it costs thousands.”

The state doesn’t have the people, facility or money to undertake such a multi-year project, Mastone said, so after he does some research, he and the state are satisfied to let nature take its course.

“Nature can bring it in and it can bring it out again,” Mastone said. “We encourage people to visit it, as long as they don’t take anything from it. Go see it. This is exciting; how often do you get to see a shipwreck?”

Taking a chunk for a souvenir is considered a misdemeanor, he said, punishable by a $1,000 fine and even six months in jail.

For those who love the lure of the sea and this region’s significant history in seafaring, ship building and shipwrecks, Mastone suggests a visit to the website at the Board of Underwater Archaeological Resources at http://www.mass.gov/eea/agencies/czm/buar/.

Among the multitude of information on the site is the page for The Shoreline Heritage Identification Partnerships Strategy, or SHIPS, which Mastone recommends.

The maritime artifacts that washed up earlier this week on Salisbury Beach are far from the first experience the town’s had with historic shipwrecks.

Well-known by residents is the skeleton of the ill-fated schooner Jennie M. Carter, whose remains rest in the waters off Salisbury Beach Center. A testament to one of the worst spring blizzards ever to hit the Northeast, the sinking of the Jennie Carter in the late 19th century took the lives of its entire crew. But no bodies were found, and when Salisbury residents left their homes after the snowstorm on April 13, 1894, the only life aboard was the ship’s cat, sitting in the captain’s chair.

“That entire crew died,” said Victor Mastone, director and chief archaeologist for the state Board of Underwater Archaeological Resources. “The currents carried their bodies out.”

Mastone doesn’t believe that the large pieces of shipwreck that washed up this week on the beach were once a part of the Jennie Carter, even though the 130-foot, three-masted vessel’s broken bones can still be seen ensconced in the sea floor during very low tides or when storms and seas scour away the shoreline.

The Jennie Carter is just one of Salisbury’s most famous shipwrecks chronicled by local historian Carolyn Sargent in her book, “Salisbury History.” Sargent described others recorded after they lost their battles with bad weather, heavy seas and “Breaking Ledge” reefs, which lie about three-quarters of a mile off Salisbury Beach.

The schooner Halifax went down with all hands after breaking up on the reefs during a spring gale on April 10, 1852. Although many ships were lost prior to this date, it is the Halifax that began the documentation of lost vessels off Salisbury’s coast, according to Sargent.

Next, the steamer Sir Francis foundered and sank on Jan. 3, 1872. According to Sargent, this was an early iron ship of 1,500 tons built in Hull that year for English merchants. After leaving Liverpool, England, on its second voyage, the sailors were “plagued by storms and fog” during their North Atlantic crossing, Sargent wrote. The first land they saw was Breaking Ledge, which spelled its doom. But fortunately, one passenger and 30 of its crew survived in lifeboats, landing on Plum Island, according to Sargent.

On Nov. 28, 1878, the 31-year-old schooner William Carroll, out of Bangor, Maine, ran into the wrong pilot and bad weather, sinking after the captain was forced to beach the ship south of the North Breaker, according to Sargent. The crew clung to the masts all night, as they snapped and a raging sea tore apart the ship, until low tide came and rescuers reached them.

On Feb. 9, 1896, the 133-foot long, 286-ton schooner Florida was wrecked on Salisbury Beach, so close to shore the crew’s calls for help could be heard by those on land. The ship met its fate when “the wind was blowing from the Northeast and snowing so hard they could hardly see,” according to Sargent.

The steamer Marble Bird was the next to fall victim to the shifting sands of Breaking Ledge, according to Sargent, when it struck a sandbar on July 6, 1904. According to his sea charts, the captain expected 11 feet of water, plenty to clear the nine feet his vessel drew. What he found was only six feet of water, grounding his ship as water poured below decks, extinguishing the fires in the boilers and filling the hold. No attempts to free the ship from the sand were successful; after all movable parts were removed, only the wheelhouse and some machinery remained.