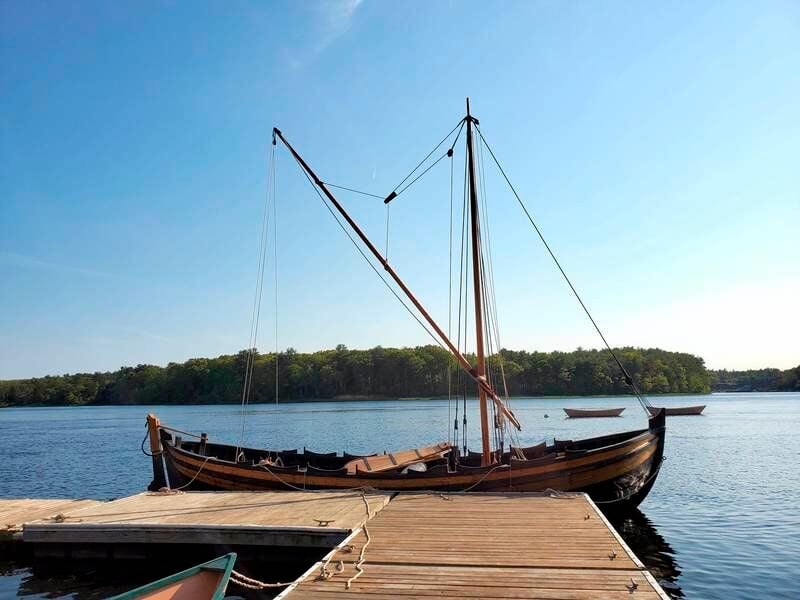 COURTESY PHOTO. The shallop, restored at Lowell's Boat Shop in Amesbury, is scheduled to sail to Gloucester on Thursday. 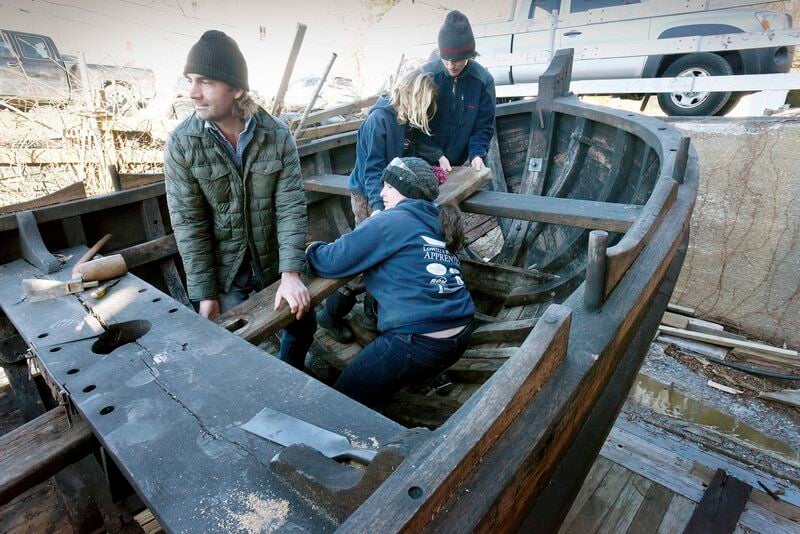 BRYAN EATON/Staff file photo. Graham McKay and his team of high school apprentices at Lowell's Boat Shop restored the replica of a shallop which was used on the Mayflower to bring crew and passengers to shore from the mother ship. In this photo from before the pandemic began they work to remove a board from the bottom of the boat which was rotted.

COURTESY PHOTO. The shallop, restored at Lowell's Boat Shop in Amesbury, is scheduled to sail to Gloucester on Thursday.

BRYAN EATON/Staff file photo. Graham McKay and his team of high school apprentices at Lowell's Boat Shop restored the replica of a shallop which was used on the Mayflower to bring crew and passengers to shore from the mother ship. In this photo from before the pandemic began they work to remove a board from the bottom of the boat which was rotted.

A restored piece of America's maritime history is set to leave the dock at Lowell's Boat Shop in Amesbury for a trip to Gloucester this week for public viewings and demonstrations at Maritime Gloucester.

The Fuller shallop, a restored replica of the original shallop aboard the Mayflower, and now a complement to the restored Mayflower II, is scheduled to arrive in Gloucester on Thursday evening.

The 33-foot, open vessel will tie up at Maritime Gloucester's Harriet Webster Pier, next to the schooner Ardelle, and host the public viewings and demonstrations on Friday and Saturday before departing on Sunday.

“This is a tremendous honor for Maritime Gloucester to host this historic piece of American maritime history at our pier,” Michael De Koster, executive director of Maritime Gloucester, said Monday. “This our first serious event since reopening after being closed for 14 months because of COVID-19 and we anticipate this will be the calling-card event to kick off what what we'll be doing all summer long.”

The shallop was restored at Lowell's Boat Shop in Amesbury under the direction of master boatbuilder and shop executive director Graham McKay.

On Thursday, plans call for a small crew to sail the shallop, which was christened and launched on April 28 in the Merrimack River, from the Amesbury shop to Gloucester Harbor.

It is expected to arrive between 3 and 6 p.m., depending on tides and weather. It will be met by a flotilla of Gloucester vessels, including the schooners Ardelle and Thomas E. Lannon, other wooden work boats and some gig rowers.

The vessel will use Gloucester as its first stop on its sail back to Plymouth Harbor, where it is expected to arrive June 19 and be reunited with the restored Mayflower II.

Maritime Gloucester has scheduled several events to coincide the shallop's visit to Gloucester.

On Friday, the public will be allowed dockside viewing of the shallop and the chance to meet its crew from 10 a.m. until 3 p.m.. From 11 to 11:30 a.m., the shallop crew will demonstrate several tasks from the operation of the shallop, including a hoist-and-sail and knot tying.

De Koster said the $25 tickets for the 7 p.m. event are limited and can be purchased on the Maritime Gloucester website (maritimegloucester.org).

The public will have another chance for dockside viewing of the historic vessels from 10 a.m. to 3 p.m. on Saturday. At 11 a.m., the shallop crew will perform the same 30-minute demonstration on its operation, but enhance it with a discussion of the boat's tools of the trade, such as braces and rigging.

The shallop is scheduled to leave Sunday morning to continue its journey to Plymouth Harbor.

The Fuller shallop is a replica of the shallop brought to America aboard the Mayflower in the 17th century and what the Pilgrims used — by oar and sail — to explore the coastline of what now is Massachusetts. It was the vessel the Pilgrims used to discover Plymouth Harbor.

Shallops were designed as heavy, beamy vessels that allowed the Pilgrims to transport heavy items while affording the strongest possible safety in unfamiliar coastal waters.

The original shallop was stowed aboard the first Mayflower during its trans-Atlantic journey in 1620 from England to America.

“Plimoth Patuxet’s founder Harry Hornblower commissioned William Avery Baker — the same renowned naval architect who researched and created the plans for the museum’s Mayflower II — to design a reproduction of the shallop,” according to the release from Maritime Gloucester.

In 1957, the British, in a gesture of thanks to their American allies in World War II, built and launched the Mayflower II in England. The ship was sailed to the United States and presented as a gift.

Around the same time, the reproduction of the original Mayflower shallop was built at the Plymouth Marine Railways in Massachusetts and greeted Mayflower II when it sailed into Plymouth Harbor in June 1957.

Time and the elements took their toll on the Mayflower II and its restored shallop. Last year, the Mayflower II completed its three-year restoration at the Mystic Seaport Museum in Mystic, Connecticut.