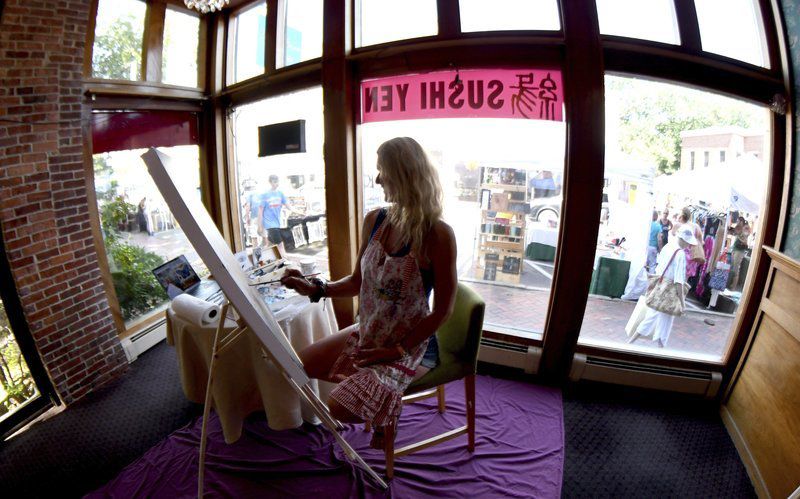 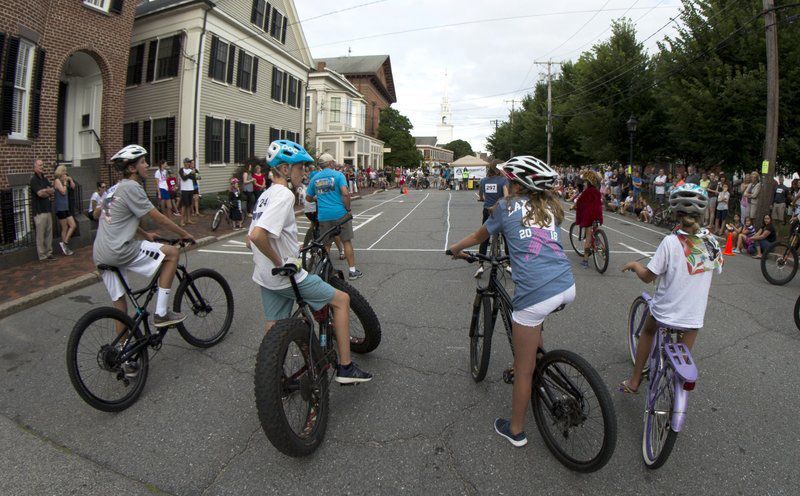 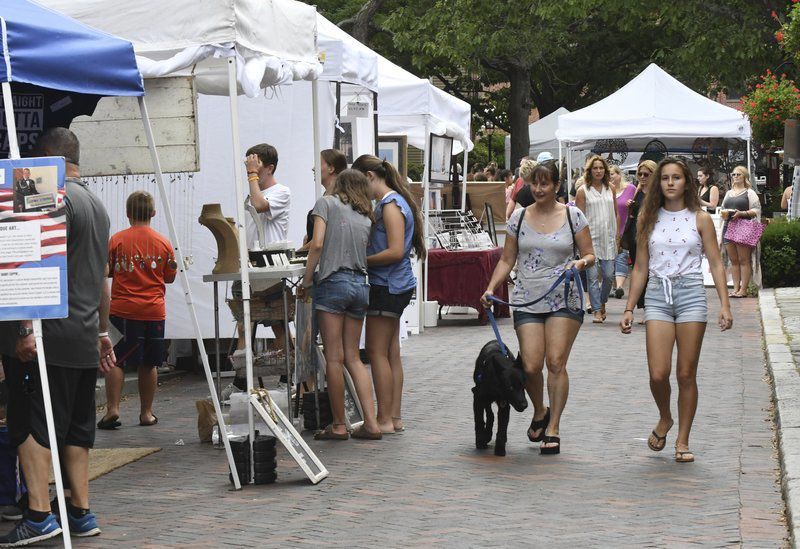 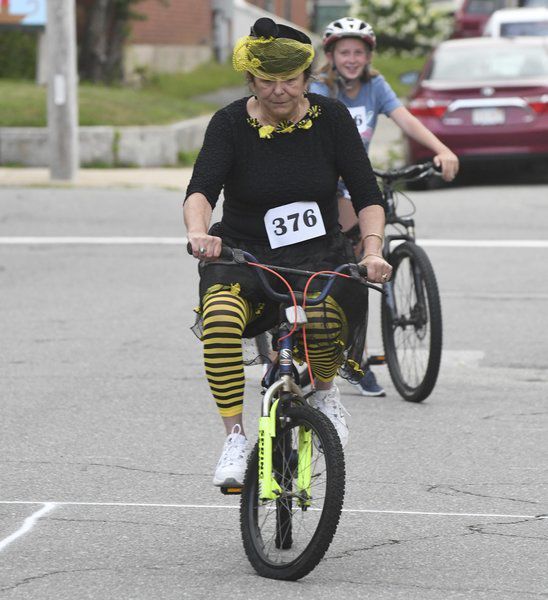 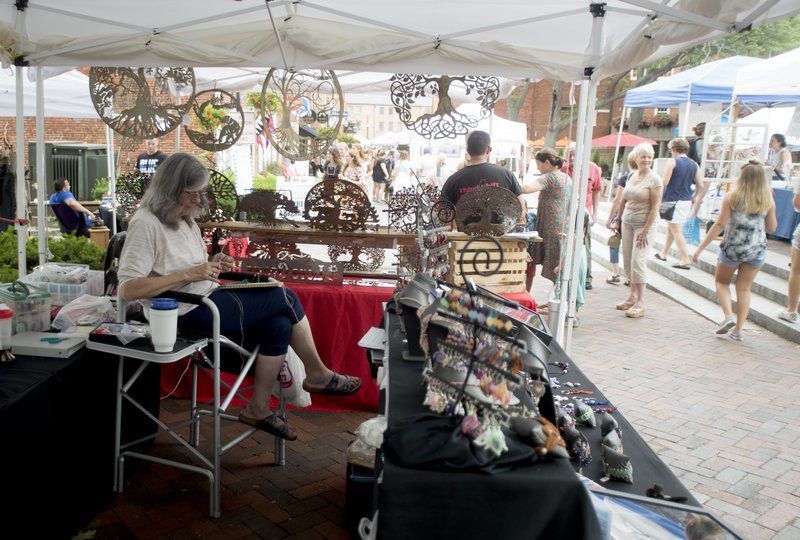 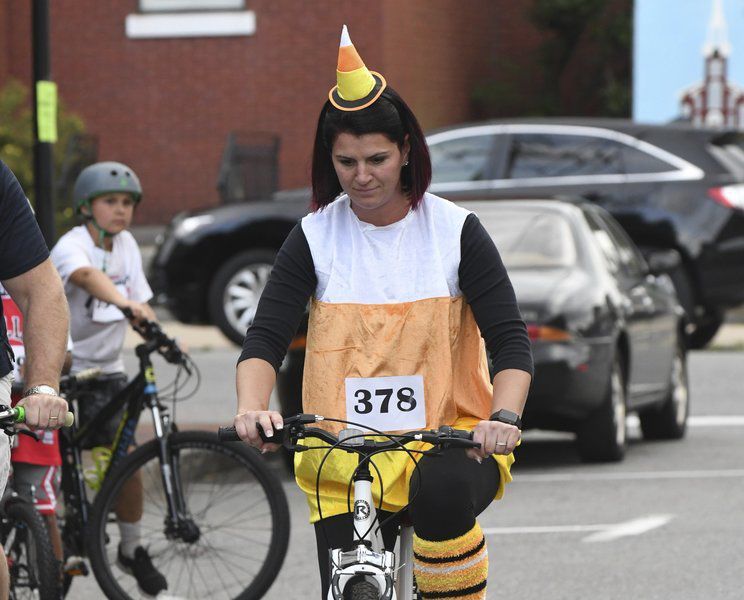 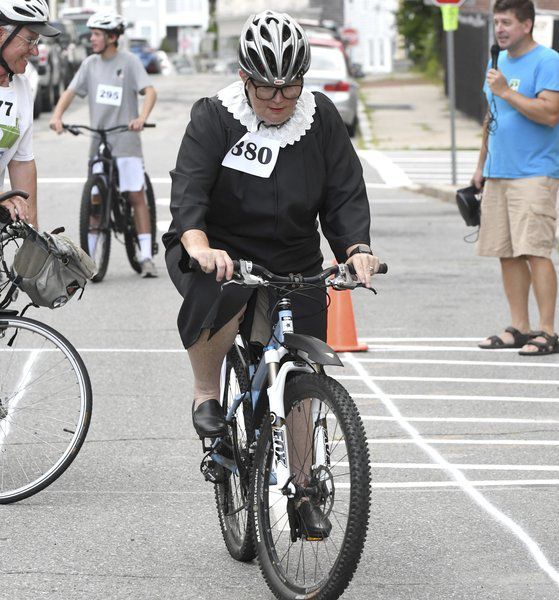 NEWBURYPORT — For the third consecutive year, John Brown is continuing to carry the torch for the local arts community during Yankee Homecoming, filling the streets with a splash of cultural color through the Inn Street Artisans Revival.

Since 2016, the annual festival has seen Inn Street transformed into a vibrant cultural bazaar filled with artists, craftspeople and other local vendors showing off their unique, often handmade or homemade goods under at least two dozen tents throughout the courtyard.

The movement was started by Brown, owner of Spirit of Newburyport, who said that after witnessing an increased corporate presence among vendors during the 2015 Yankee Homecoming celebration, he hoped to take the festival back to its roots in supporting local artists and businesses.

“Art is having less and less opportunities in a community that has a designated cultural district, and it seems to me that we’re going in the opposite direction we should be,” Brown said. “We should be working together to earn that cultural designation, and to me, that’s not happening. We need to talk to each other.”

And ever since the Artisans Revival began, Brown said he feels he has been successful in his mission.

He noted that between the daily Inn Street vendors and those who set up shop on Tuesday for Market Square Craft Day, the Inn Street Artisans Revival has reached a high-water mark with more than 110 participating artists and craftspeople contributing to this year’s Yankee Homecoming.

To build on his previous efforts, Brown sought to use one of Pleasant Street’s empty buildings this week, and arranged a series of live art demonstrations to be held inside the former Szechuan Taste restaurant, which closed last year. With a large window to the street, passersby are able to see each artist at work during the afternoon.

The building is in an area that Brown said has grown increasingly lacking in opportunity for artists and small businesses, with increased rents among several factors that he said have made it difficult for them to thrive.

“For the first time in 10 years, I don’t think I had ever seen this street looking so distressed in all the times I’ve been here for festivals,” Brown said.

On Tuesday, Newburyport resident Renata Loree painted away inside the vacant restaurant space. On Wednesday, 25-year city resident David Ten Eyck could be seen in the window as he worked on both oil-on-canvas and watercolor depictions of Newburyport scenery. Brown said he hopes to have a different artist in the building’s window every afternoon for the rest of the week.

On Inn Street, waves of people stopped at tents manned by various artisans to admire or purchase pieces of their work.

Among this week’s vendors is Cecily Adriana Artistry, operated by local painter Cecily DeAngelo, 20, who on Tuesday said she felt supported by the many people who stopped by to check out her selection of portrait and landscape oil paintings.

“It’s good to have the exposure, and it’s good for confidence to be able to display your work in public,” DeAngelo said. “Also, there are a lot of generations here — people my age, younger kids and older people — and I think it’s good to have the different demographics come by because my work is pretty diverse.”

Standing by a display of his custom-made patriotic bottle cap artwork on Wednesday was retired Army Staff Sgt. Zeke Crozier, owner of Handy Cappin’ LLC. Crozier, who lives in Kansas, was the special guest speaker at the Yankee Homecoming Veterans Luncheon on Tuesday and was invited by Brown to sell his art on Inn Street. Crozier said his work has been well-received by the community.

“It was a nice surprise to be invited here,” Crozier said. “Everyone in Newburyport has been extremely welcoming to me. I’m blessed to be doing this.”

Gerrie Maffris was selling her collection of micro macrame jewelry, a popular style of product in Europe and South America. Maffris said she was glad to be a part of the Inn Street Artisans Revival, and that she was happy Brown was helping to bring an array of art styles to the community.

“It brings in people who are doing high-quality handiwork and bringing the idea of art to more people,” Maffris said. “People walk up, and by the time they hit the middle of the table, they’re smiling. I just like the feeling that looking at my work makes people happy.”

In the future, Brown said he hopes the event will continue to grow.

The Inn Street Artisans Revival will continue to be held from 10 a.m. to 5 p.m. through Sunday.