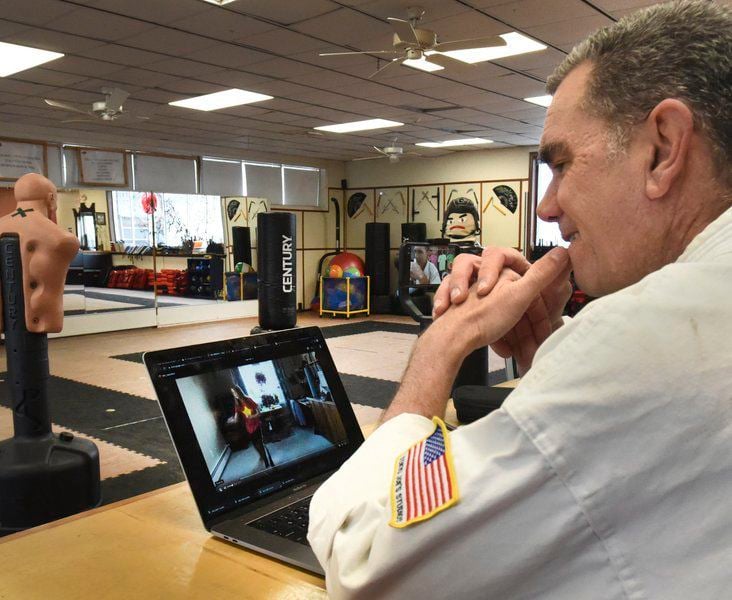 BRYAN EATON/Staff photoShihan Kendall Buhl, owner and instructor of The Dojo martial arts studio in Salisbury, watches a recording of a student’s workout from home. 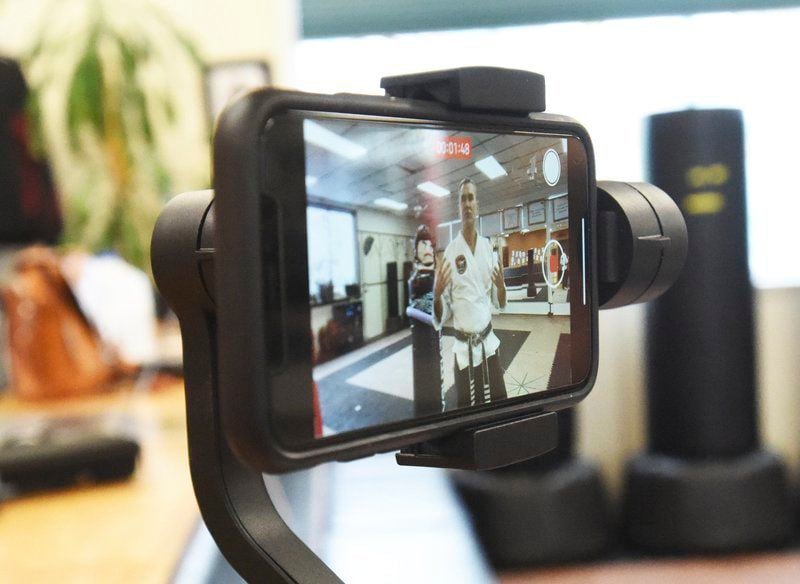 Karate instructor Shihan Kendall Buhl gives tips by cellphone to one of his students. 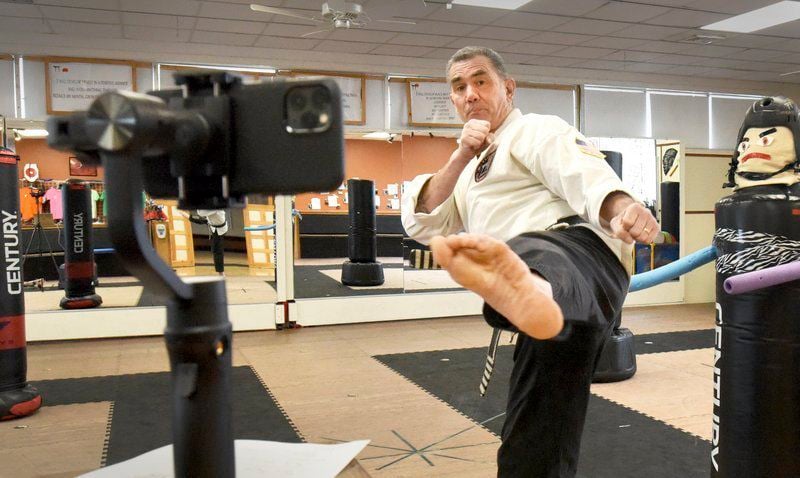 BRYAN EATON/Staff photoKarate instructor Shihan Kendall Buhl watched a recording of a student’s workout from home at his Salisbury martial arts studio. He gives tips on the workout, recorded on his cellphone, to send to the student.

BRYAN EATON/Staff photoShihan Kendall Buhl, owner and instructor of The Dojo martial arts studio in Salisbury, watches a recording of a student’s workout from home.

Karate instructor Shihan Kendall Buhl gives tips by cellphone to one of his students.

BRYAN EATON/Staff photoKarate instructor Shihan Kendall Buhl watched a recording of a student’s workout from home at his Salisbury martial arts studio. He gives tips on the workout, recorded on his cellphone, to send to the student.

SALISBURY — Plenty of people are finding it hard to find something to do after the state imposed a lockdown order. But a local karate and kickboxing studio is providing some structure in a world of social distancing.

Last week, Gov. Charlie Baker ordered all schools and nonessential businesses to close to the public until April 7 due to concerns about the coronavirus.

Shihan Kendall Buhl, the owner and chief instructor at The Dojo on Bridge Road, said he made the tough choice to close to the public long before Baker’s order.

“When I saw this was coming down the pike, I took my instructors out for dinner and said, ‘What can we do to create an ideal, online dojo?’” Buhl said.

The Dojo staff had plenty of answers, and kickboxing and karate student Leanne Heller said she could build an online platform. Soon, Buhl and his 12 instructors began creating online video lessons for their roughly 300 students, ages 3 to 78.

“I thought a lot of this would be too ambitious to pull off,” Buhl said. “But the more we talked about it, the more this thing actually began to take shape.”

Each day, Buhl’s students can enter the remote dojo at www.thedojosalisbury.online and watch a personalized lesson from their instructor and then send their own videotaped lesson back for a critique.

“Some of it is extremely serious instruction and some of it is kind of having a little fun and goofing around,” Buhl said. “We even have a two-minute video of me showing students how to do The Twist, just like Chubby Checker. It actually has some implementation. Being able to pivot on the ball of your foot is really important for doing certain kicks and powering your punches. So we just had some fun and got silly with it.”

Heller’s online platform was launched a week ago and has received rave reviews, according to Buhl.

“People immediately started embracing it,” Buhl said. “They were going online and watching the instructional videos, then going about practicing. Then, they would send us back videos of what they were doing.”

Newburyport resident and black belt karate student Cyrus Alphonse said the new online system has been a great way for he and his sons, ages 10 and 7, to keep up with their training.

“This gives us a structured activity that I don’t have to watch and be there with them every five minutes,” Alphonse said. “It also gives them the autonomy to get it done on their own. In fact, my 10-year-old has been taking on the lead as instructor to my 7-year-old.”

Alphonse normally attends the 1 p.m. adult class at The Dojo and said the online program has given he and his fellow students a support system during a troubling time.

“This online system has been a big boon to my attitude at home,” Alphonse said. “The adult class has become like a family. Every one of the students are all different and I don’t think we would be close friends in our normal social circles. But being with them every Tuesday and Thursday makes them my extended family.”

Although the videos are not live, The Dojo staff has discussed adding new content in the future, according to Buhl.

“We could do the classes live on Zoom or something else,” Buhl said. “But we decided to do it this way, which still allows us that interaction which is really important for instruction. You can’t have good instruction without feedback.”

He said the remote dojo helps to create a social togetherness among his staff and students during a time of self-quarantine.

“The psychological and emotional effects of all of this are just starting to sink in,” Buhl said. “We are all going to be dealing with it. I think this is one way that people can be socially together and can engage in their community and with people who are important to them. That student and instructor relationship is so important. It’s just another way that we can move forward.”

Giving his students a chance to have their regular lessons can provide everyone with “an anchor,” according to Buhl.

“This really is kind of what we do as a martial artist,” Buhl said. “The whole idea of martial arts training is, whatever the situation is, you find a way to make a bad situation work out. We have had 159 submissions and they are just fun to watch. You see everyone doing their thing and practicing at home from the kids to the adults. Our instructors have been fantastic, too.”