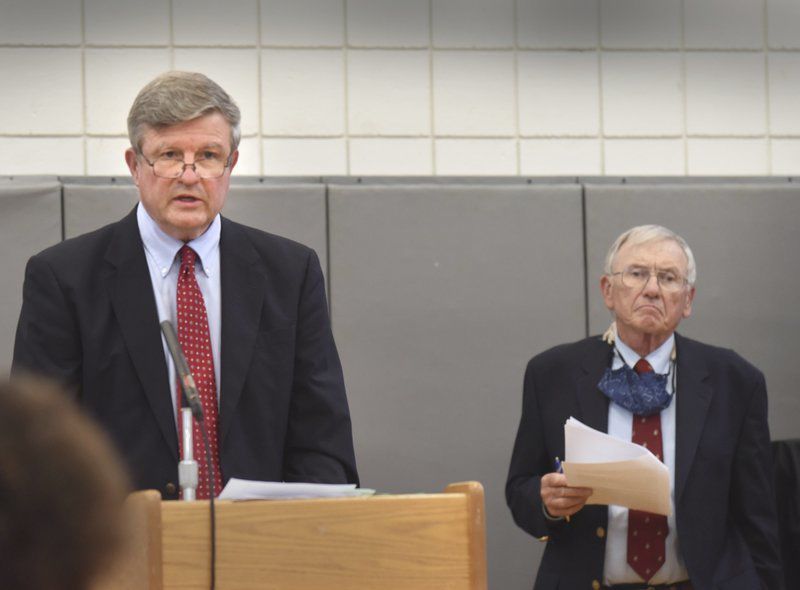 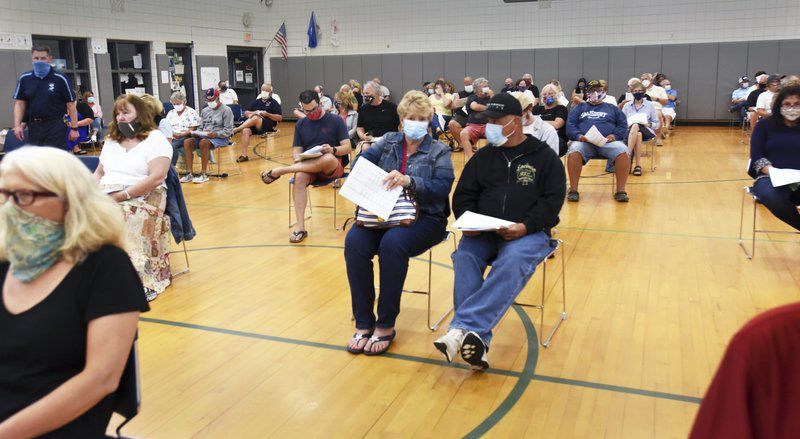 BRYAN EATON/Staff photoVoters at Town Meeting in Salisbury wore masks and were spaced apart Monday night. The biggest proposal of the night called for the construction of a visitors center and restrooms at Salisbury Beach Center. The article was approved.

BRYAN EATON/Staff photoVoters at Town Meeting in Salisbury wore masks and were spaced apart Monday night. The biggest proposal of the night called for the construction of a visitors center and restrooms at Salisbury Beach Center. The article was approved.

SALISBURY — The town manager is ready to move on after a contentious but successful Town Meeting on Monday night.

More than 200 mask-wearing residents filed into the gymnasium at Salisbury Elementary School for the annual meeting.

Town Manager Neil Harrington placed a request on the warrant to borrow $5.2 million to build a welcome center and restroom facilities at the Beach Center.

The request was approved 149-48. The first building will go up at the corner of Cable Avenue and Beach Road while the second will be constructed at the west end of Broadway Mall.

"I'm gratified that a number of people felt strongly enough that we needed to finally move the welcome center forward," Harrington said. "We had a great turnout and the town is very gratified by the vote of support."

But Town Meeting approval did not come without objections from the Salisbury Beach Betterment Association, which introduced a motion to table the request until fall. That motion failed.

The town did not give residents enough time to get acquainted with the proposal, according to association President Ray Champagne.

"We lost the fight but we'll move on," Champagne said. "Our organization has a 33-year history of working with the state government and the federal government to make things work at the beach. We're not out for a fight."

He said his main concern is splitting the project into two buildings.

"We know that it is expensive to build at the beach, especially when you are dealing with the general public," Champagne said. "You have to conform to a lot of regulations that the homeowner doesn't have to deal with. Maintaining two buildings for use by the general public is also a challenge.

"I hope the town pays attention to the finances and the architects do a good job in making sure that all of the construction falls into place," he added. "I personally am a retired contractor. I have built a lot of houses on Salisbury Beach and I know the difficulties and issues. But I am hopeful."

Harrington said the town and Epstein Joslin Architects have a few more final touches to make and expect to put the project out to bid this summer.

"Construction will start sometime in the fall, if we keep according to schedule," Harrington said. "Then, it should be concluded by the end of June of next year."

Harrington pointed out that a request to borrow $3 million to install a new water main on Bridge Road was approved Monday night as was the town's $29.5 million operating budget.

"Some people chose not to attend and that is their right," Harrington said. "But, from the size of the crowd, I think there was a fairly common sentiment that the town took all of the necessary precautions and kept things as safe as we possibly could for everyone. I didn't hear any complaints, after the fact. So people who attended I think felt that we did the right thing and the people who felt nervous about coming stayed home and that is fine."