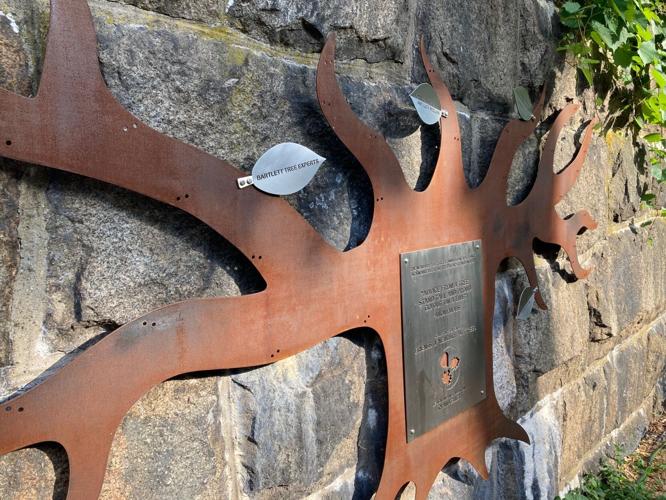 The bas relief sculpture is on the Clipper City Rail Trail near Washington Street. 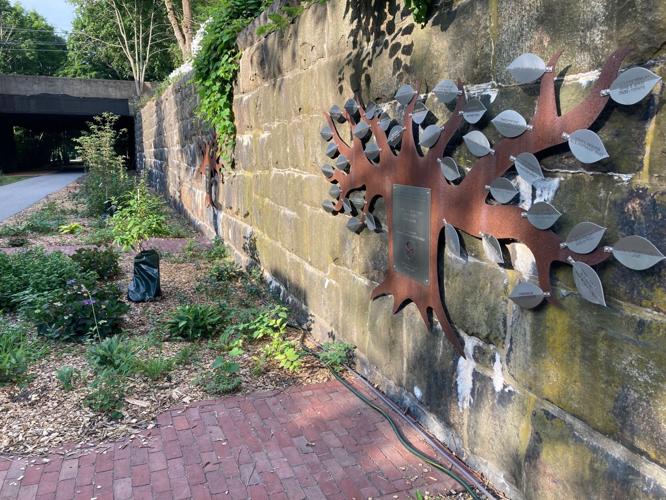 The first tree sculpture has 50 leaves.

The bas relief sculpture is on the Clipper City Rail Trail near Washington Street.

The first tree sculpture has 50 leaves.

NEWBURYPORT — Among the many works of art that lines the Clipper City Rail Trail is a bas-relief steel tree sculpture with leaves near Washington Street.

The leaves are the result of the successful Friends of Newburyport Trees’ Dedicate-a-Tree program that encourages residents and businesses to donate $650 to the nonprofit organization. In addition to the metal leaf, the donation can result in a tree being planted and tended on a city street.

In all, the campaign raised $40,000 will all money going toward protecting, preserving and maintaining the city’s trees.

With that sculpture recently filled to capacity with leaves, a similar sculpture has taken root right next to it. Both were the creation of local sculpture and wire artist Ryan Kelley, Friends of Newburyport Trees President Cris Miller said.

“I love the recognition sculptures because they give people a prominent and permanent place to recognize an important person/company in their lives. It does not matter the reason …memorial, honor, congratulation, thank you, etc. The tree that goes with the leaf helps the environment, beautifies Newburyport and helps improve the urban canopy,” Miller said.

Miller said due to the rising costs of planting and maintaining a tree, a $750 donation is needed to secure a spot on the newest sculpture. There are 55 leaves available and so far 10 have been added.

A typical new tree costs roughly $250 and it costs $200 to plant it. Watering also costs more than $100 for the tree’s first two years in the ground, Miller said.

The area where the sculptures are located has garnered unwanted attention in recent weeks after 27 trees of varying sizes were cut down above the rail trail in December.

The Parks Commission approved the removal of two trees so additional space could be used for the sculptures. But instead of two trees being cut down, 25 more were felled in December. In a few hours, rail trail abutters lost a large part of their privacy and were exposed to windier conditions.

City officials announced it would be planting 30 trees this fall at a cost of roughly $20,000 to recreate conditions there but conceded it would take years for that to happen.

The all-volunteer FoNT was created in 2004 but was dormant for several years before Miller joined. Its mission is to raise money for the city’s Tree Commission. The group consists of three board members and about 10 volunteers, including an arborist, landscape architect and a weed puller, according to Miller.

Miller said the Tree Commission returned the money-raising favor when it created the Guide to Newburyport Trees, a catalog of every tree species in the city.

“It’s awesome, it blew me away,” Miller said.

The catalog, presented by the Tree Commission, came about after FoNT conducted a full inventory of city trees roughly two years ago. That inspired the creation of the guide which, as of today, is in its fifth edition.

The guides are $20 each and available at City Hall.