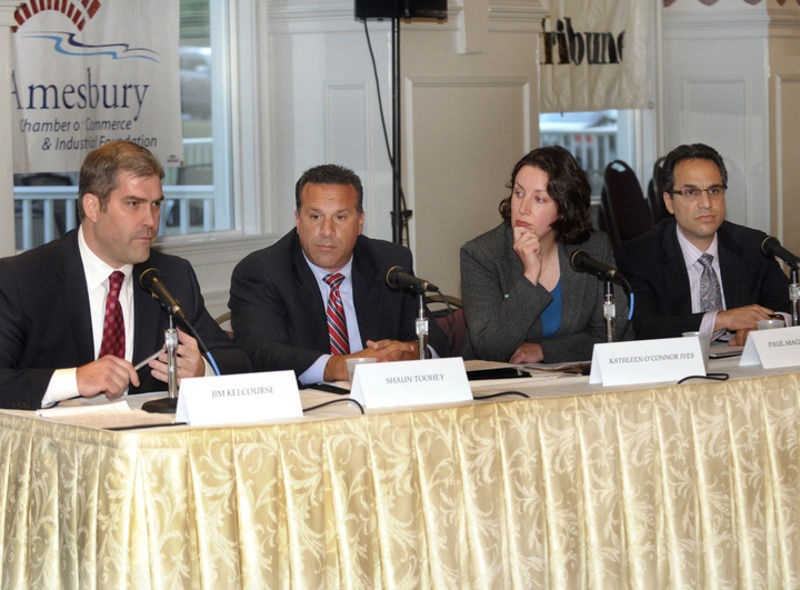 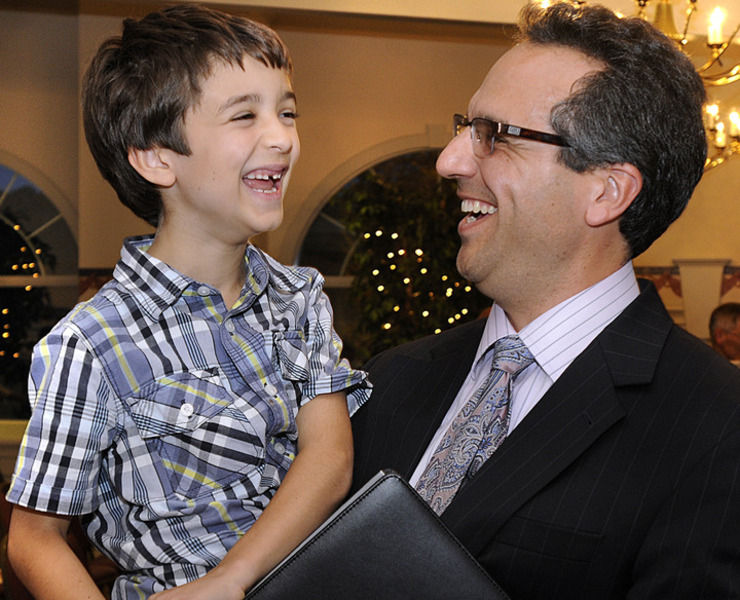 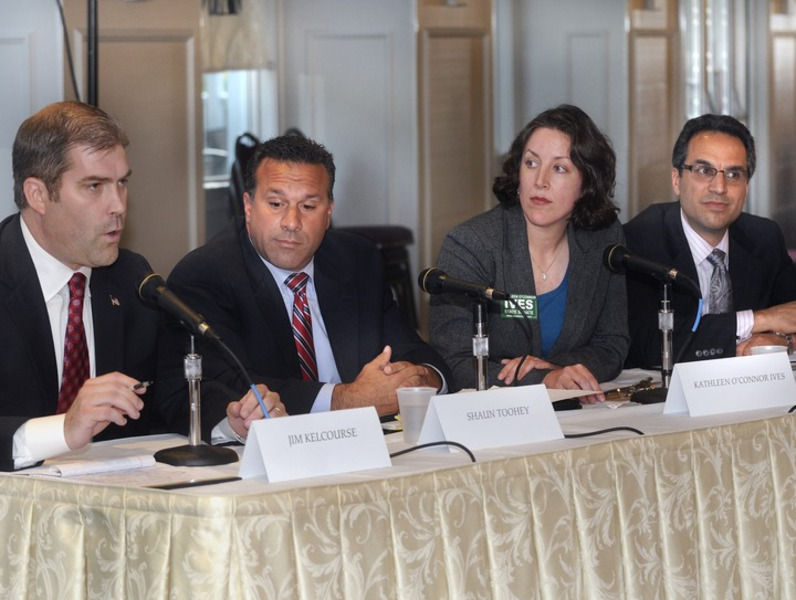 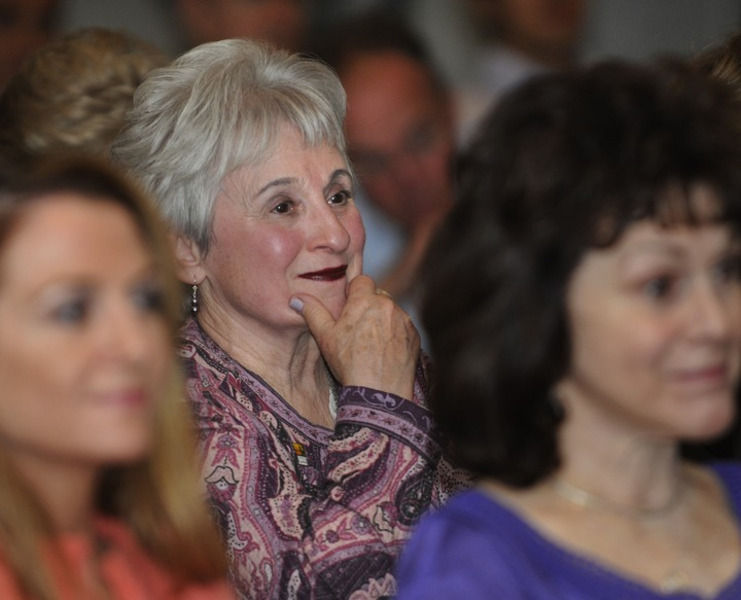 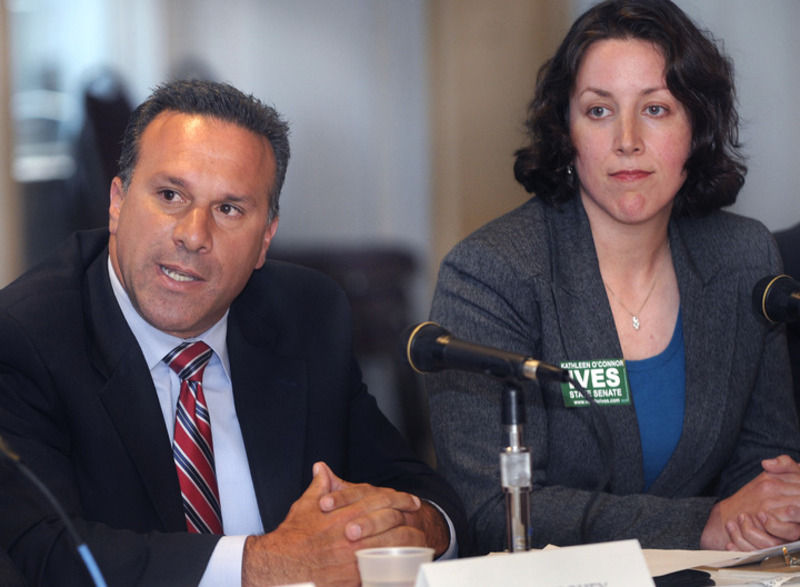 HAVERHILL — Four candidates vying for the vacant and newly redrawn 1st Essex Senate seat formerly held by Steven Baddour faced off last night in the first of several debates leading up to the Nov. 6 election.

Haverhill School Committeemen Shaun Toohey and Paul Magliocchetti took the evening’s most aggressive shots at each other, with Magliocchetti calling Toohey’s assessment of government’s role in improving the economy and creating jobs “misguided” and Toohey calling Magliocchetti’s support for rolling back the Massachusetts sales tax “hypocritical” because Magliocchetti purchased campaign supplies in tax-free New Hampshire.

O’Connor Ives is the Democratic nominee and Toohey is the Republican candidate. Kelcourse and Magliocchetti are running as Independents.

The debate at DiBurro’s function hall in Haverhill was sponsored by the Greater Haverhill, Amesbury, Salisbury and Greater Newburyport Chambers of Commerce. It featured questions from each chamber and audience members.

About 75 guests attended the debate, which was moderated by Eagle-Tribune publisher Al Getler.

The candidates carved out positions on how best to stimulate local economies, support community hospitals and reform public housing and education. They also fielded questions on immigration issues, women’s rights, homelessness and the environment.

During the debate and in interviews after it, each candidate pledged his or her support for rolling back the state sales tax to 5 percent.

O’Connor Ives seemed most passionate in advocating for community hospitals in the district, such as Anna Jaques in Newburyport, Holy Family in Methuen and Merrimack Valley Hospital in Haverhill. She said the Legislature must make sure the reimbursement rate from private insurers to community hospitals for medical services is fair and allows them to compete and survive. She referred to a recent study by the Attorney General’s Office that found Merrimack Valley hospitals receive the lowest reimbursement rates in the state.

“These are some of our communities’ largest employers and they also provide valuable services to our residents,” she said.

O’Connor Ives cautioned against the Legislature’s impulse to overreach in making reforms to local housing authorities in light of several scandals around the state. She noted a governor’s commission has recommended that some small housing authorities be regionalized and consolidated.

Kelcourse said he opposes regionalizing local housing authorities, but said he could support allowing nonprofits to have a role in running housing developments for poor or low-income people.

Kelcourse cautioned against the efforts of some to kill what are often referred to as “corporate loopholes.” He said some of those so-called corporate loopholes, such as providing tax breaks to the film-making industry, have provided a boost to communities like Salisbury that rely heavily on tourism.

Each of the candidates said economic development and job creation should be the top priority for the district’s next senator. Each said they’re the best man or woman for that job.

Kelcourse, a lawyer, touted his experience in local government, business and his many educational degrees. Toohey and Magliocchetti also highlighted their dual experience in government and small business. Magliocchetti said he co-owned a machine shop in Haverhill before he joined a law firm in the city; Toohey is a self-employed mortgage banker.

Toohey said lowering the sales tax would be one of his top priorities if elected. He said adding another Republican to the Democrat-controlled and dominated Senate is the best way for voters to bring fiscal responsibility and restraint to state government.

Magliocchetti also voiced strong support for rolling back the state sales tax rate, as well as the local-option meals taxes that some communities in the district have passed. He also offered the idea of giving new restaurants a break from the meals tax until they are established.

Toohey said there are many things the Legislature can do to stimulate local economies, by reducing the sales and income tax and tightening budgetary spending, for instance. That sparked the feistiest exchange of the night when Magliocchetti said he “couldn’t disagree more” with Toohey because “economic growth comes from the private sector and not the government.”

Toohey fired back, accusing Magliocchetti of being “hypocritical” about in his position on the state income tax because, according to Magliocchetti’s campaign finances report, he purchased campaign supplies in tax-free New Hampshire.

After the debate, Magliocchetti said the fact he bought supplies at Staples in Plaistow, N.H., bolsters his position on that issue. He said he bought the supplies online and that he was directed by Staples website to pick up his merchandise at the closest store in Plaistow.

“My goal is to get a Staples in Haverhill, but the only way to do that is to lower the (Massachusetts) sales tax,” Magliocchetti said.

“They can talk about being independent all they want, but that just means they won’t be able to get anything done at the Statehouse,” Toohey said after the debate.

O’Connor Ives said she has been endorsed by every member of the Newburyport City Council. If elected, she promised to research issues thoroughly and seek community input across the district.

“I have the confidence of my colleagues and I’m beholden to no one,” she said.

The next debate is Oct. 10 at Merrimack Valley Golf Club in Methuen.