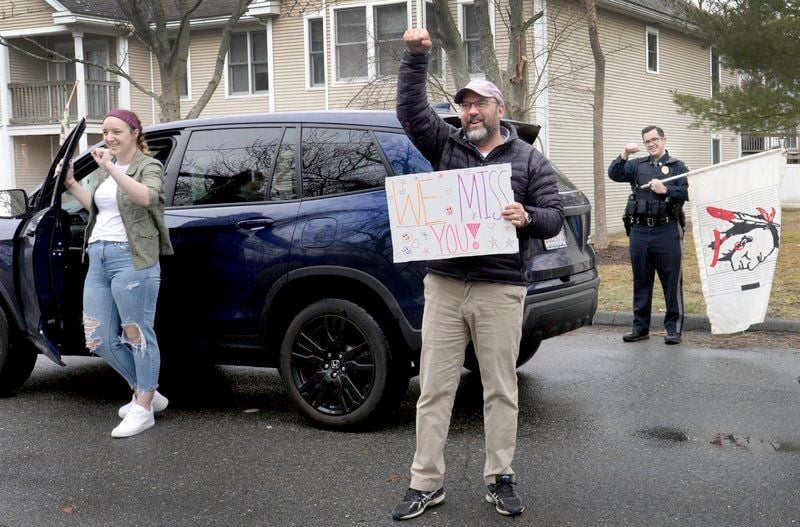 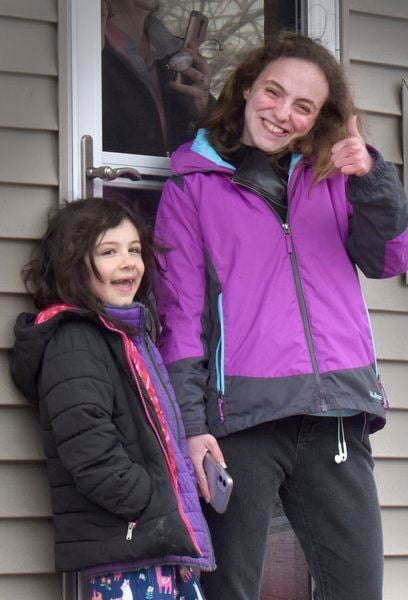 BRYAN EATON/Staff photoWith a big smile, Amesbury High School graduate student Melissa Pouliot, shown with her niece Alana Pouliot, 6, gives a thumbs up to the school staff and Amesbury police school resource officers who stopped outside her home to pay a visit Thursday. 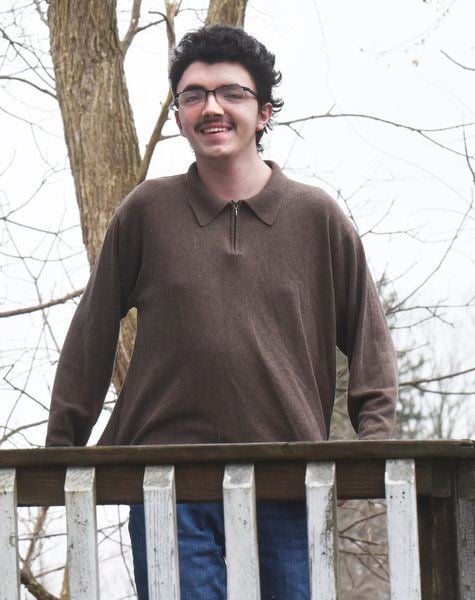 BRYAN EATON/Staff photoWith a big smile, Amesbury High School graduate student Melissa Pouliot, shown with her niece Alana Pouliot, 6, gives a thumbs up to the school staff and Amesbury police school resource officers who stopped outside her home to pay a visit Thursday.

AMESBURY — An impromptu welcome wagon of school administrators, teachers and police officers headed out Thursday morning to bring joy to some cooped-up students.

Superintendent Jared Fulgoni said he and his son Henry cooked up the idea.

"I saw him FaceTiming with some of his friends," Fulgoni said. "We got to talking and I told him some of our students are out there who aren't as fortunate to have a strong social network as he has."

Henry told his father he should go out and visit some of the students. The elder Fulgoni agreed and contacted Director of Special Education and Student Services Lynn Catarius. They soon put together a list of about a dozen students in the Amesbury High School life skills class.

"Nowadays, a lot of us have adapted," Fulgoni said. "We have virtual cocktail parties and we FaceTime with our friends. We go on Skype and we have conference calls. For this group of students, they don't have that. They aren't afforded that same level of social interaction."

Fulgoni also reached out to Police Chief William Scholtz and he, Catarius and life skills teacher Sarah Luz headed out to give the students a show by way of a full police escort courtesy of school resource officers Ron Guilmette and Craig LeSage.

"We had the police cruisers in front and behind us," Fulgoni said. “We pulled up in front of their houses and honked our horns and flashed our lights. The police put their sirens on and we played music. We also had some signs saying, 'You are Missed!' and 'We Miss You!'"

All the commotion didn't go unnoticed by the students' neighbors, either, Fulgoni said.

"Tons of people came out onto their porches and were waving along with us," he said. "The point was just to make these kids realize that they hadn't been forgotten. They still have friends and they are missed. It also gave them a chance to have some social interaction and make them feel good."

Fulgoni said the effort to cheer everyone up was just as effective for the school resource officers and the students' neighbors.

"The smiles on the faces of the adults and the police officers were equally as big as the kids,'" he said. “Some of the parents were getting emotional, too. It just meant the world to the parents to know that there are people who remember their kids. To have a group of people show up at your house who care about your child is a pretty great thing."

Guilmette said he and his partner were happy to help out.

“These students are a really great part of the Amesbury High School population,“ Guilmette said. “We were happy to go out and see them and put a smile on their faces. They do a lot at the school and we have missed seeing them in the halls."

The caravan of four cars and two cruisers took quite awhile to make it through Amesbury on Thursday, according to Fulgoni.

Fulgoni said one of the students lives in Salisbury and attends the high school through the school choice program, "so we took a trip over there, too."

"This might be a health crisis, but it shouldn't be a crisis of humanity," Fulgoni added.