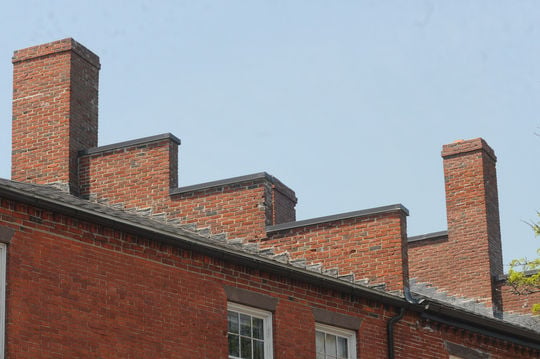 Fire breaks built into building in Market Square in Newburyport. 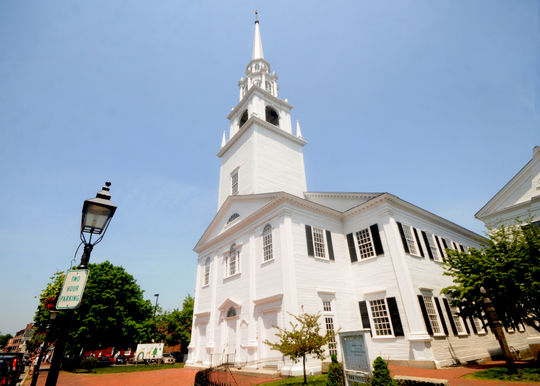 The Unitarian Church on Pleasant Street was one of the few buildings in downtown Newburyport that didn't burn down in the Great Fire.

Fire breaks built into building in Market Square in Newburyport.

The Unitarian Church on Pleasant Street was one of the few buildings in downtown Newburyport that didn't burn down in the Great Fire.

Editor's note: This is the second in a two-part series commemorating the 200th anniversary of Newburyport's Great Fire.

Newburyport awoke on the morning of June 1, 1811, to a devastated scene.

The once-thriving downtown was reduced to a charred ruin. Some 250 buildings, as well as wharves and shipping, had been destroyed by the greatest fire the city has ever seen.

Response to the destruction was immediate, and in the long term, the fire caused drastic changes that have shaped downtown Newburyport to the present day.

The enormous fire could be seen lighting the night skies of May 31 for miles around, drawing people from throughout the region to rush to Newburyport's aid. Word of the city's suffering spread fast throughout the state and along the coast. Help began arriving almost immediately in the form of furnishings, food and labor.

As early as June 3, residents desiring to show their gratitude to neighboring towns gathered to issue the following proclamation to those in Newbury, Salisbury and Amesbury for their aid.

"For they were like brothers rescuing brothers from the flames," the proclamation read. To the people of Rowley, Ipswich, Danvers, Beverly, Haverhill, Topsfield, Bradford and the state of New Hampshire, they said, "for they flew to our assistance as soon as information of our distress was given."

Similar proclamations were made for residents of Salem and Boston, who reached out in an overwhelming show of compassion. Money poured into the city to help feed, clothe and house the hundreds of Newburyporters who had lost their homes.

Christian gatherings from Boston delivered $28,000 in aid to Newburyport, and several Shaker communities north of the border in Canterbury and Enfield arrived with help as well. Even cities as far away as Philadelphia sent aid.

"The conduct of all our friends, who afforded us help in time of need, will be held as an example for the good and benevolent as long as the memory of our calamity lasts; and they have our best wishes for their welfare, and our payers to Almighty God that they may be preserved from similar evils," said John Fitz, Newburyport Town Clerk.

A gathering of residents associated with the Brethren of the Lodges of St. Peter and St. Mark came together on June 24 to commemorate the nativity of St. John the Baptist and depicted the hopeless situation just three weeks after the fire.

"The uncertainty of early enjoyments has lately been forcibly impressed upon us. When we agreed to celebrate this natal day of our favourite saint, we were moving smoothly along in the common course of business and pleasure. The scene has changed, a wide and desolating conflagration has swept away the hard earnings of many years; brought competence to poverty, and opulence to scantiness. Who that witnessed, will lose the remembrance of that night of horrors; when the aged, whose happiness is half formed of local attachments, saw the mansions where their sires were born: wrapt in flames; when helpless infancy and exhausted decrepitudes mingled their wailings with the noise and confusion of the night; and the mother affrighted and dismayed pressed her babe closer to her breast, and fled for shelter and safety, she knew not where."

The cheek by jowl wooden buildings of the day, plus inadequate firefighting equipment, were the major contributors to the devastating fires that swept through Colonial-era cities.

Newburyporters were quick to recognize the need for change, and on Friday, June 7, it was voted at Town Meeting to "adopt measures for security against similar calamities."

A mandate was put down and voted that "no buildings in the future should be placed or erected within the limits of the town, more than 10 feet high, unless the same be built with brick or stone; and a Committee appointed to make application to the General Court the present session to obtain an act for that purpose."

Strict laws were enacted restricting the use of wood building material, and requiring every able-bodied person, in the event of another blaze, to carry water to extinguish the flames.

The downtown rebuilt slowly. Brick buildings rose where wooden buildings had been before. Slate roofs were used, and between buildings fire walls were required. The distinctive architecture dominates downtown Newburyport today — three- and four-story brick buildings with high fire walls separating them.

Rebuilding would take years, and the city would never regain the prosperity it enjoyed in the golden years before the fire and the Embargo Act.

Within months of the fire, another economic blow would fall. The War of 1812 would further cripple an already damaged merchant trade. Newburyport didn't have the money to rapidly rebuild, but it did stick closely to its newly enacted building codes.

Some 15 years after the fire, Caleb Cushing wrote in his "History of Newburyport," "The injury to the town, and to very many individuals, by the absolute destruction of property, was still very serious, and its effects must long continue to be felt ... Newburyport has never yet regained its pristine position in population and wealth."

Jay Williamson of the Cushing Museum and Historical Society of Ould Newbury said it's possible the series of mysterious underground tunnels were built to battle future blazes, providing a means to transport water across the city. The tunnels, built of brick, are roughly tall enough for a man to walk through. They run under the city's major downtown streets, including Green, Federal, State and Charter streets. At Bartlet Mall's Frog Pond, there is a tunnel entrance that may have served as a place to pump water into the system.

Although the tunnels have generated romantic lore of secrecy and smuggling over the decades, Williamson argues that such a massive undertaking could not have occurred without public knowledge and substantial cost.