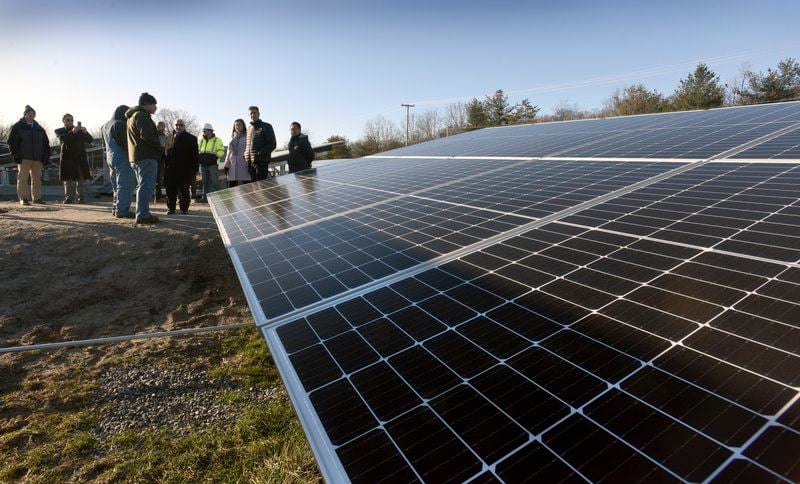 BRYAN EATON/Staff PhotosOfficials gathered for a ribbon cutting for the solar farm at South Hunt Road in Amesbury Friday afternoon. The facility, owned by Keararge Energy, has more than 11,000 solar panels and will generate 5.2 megawatts of electricity per year. 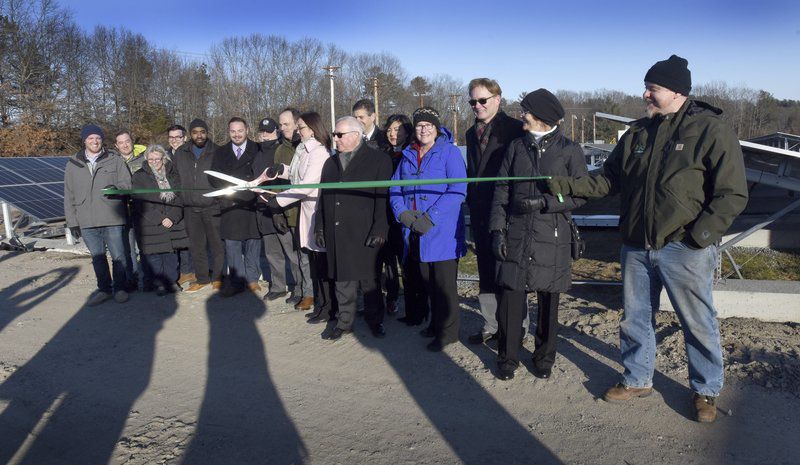 BRYAN EATON/Staff PhotosOfficials gathered for a ribbon cutting for the solar farm at South Hunt Road in Amesbury Friday afternoon. The facility, owned by Keararge Energy, has more than 11,000 solar panels and will generate 5.2 megawatts of electricity per year.

AMESBURY — The city ushered in a new era of green energy Friday with a ribbon-cutting at the Titcomb Solar Field, a 16-acre former landfill.

Boston-based Kearsarge Energy converted the city-owned site at the corner of South Martin and South Hunt Roads into a photo-voltaic electricity generator.

The 11,376-panel solar field is expected to produce 5.2 megawatts of solar energy per year for the next 20 years. The project went online Dec. 26 but representatives from Kearsarge Energy met with Mayor Kassandra Gove, the city’s Energy Committee and other local officials for a special ribbon-cutting ceremony at the Amesbury Sports Park Friday afternoon.

Gove said the city was happy to see the project come to completion.

“This will provide us with enough electricity to power 400 homes annually,” Gove said. “This will prevent the release of 4,000 tons of carbon dioxide from petroleum-based fuels per year and reduce other air pollution as well.”

Gove added that particular solar field is also the first in the state to have battery storage.

“That will ensure that we won’t lose any of the energy that is produced on-site,” Gove said. “That is very exciting for us.”

Citizen’s Energy opened a 30-acre, 6-megawatt solar farm at 56 South Hunt Road in late 2016 and more than 10 megawatts of solar energy are being generated in the city now that the Titcomb Solar Field is online.

Thomas Barrasso, the city’s director of energy and environment, said he is “incredibly enthused” by the amount of electricity now being generated out of the city.

“We have accomplished some tremendous things with energy efficiency in our schools,” Barrasso said. “We’ve just completed our LED (streetlight) retrofit program where we will save $150,000 a year in energy savings to the city. Now we have got two major solar facilities online. This has to be one of the biggest individual cities in the state to pump out so much renewable energy. Titcomb will also be the first in the state that we know of that will have battery storage. That is huge.”

The solar field project has been in the works for the past eight years. The city bought the closed Waste Management landfill site known as Titcomb Pit in 2012.

The city ended up entering into talks with SunEdison to build a 14.5-acre, 3.7-megawatt solar array on the property in 2015 but the plan fell apart when the company declared bankruptcy in 2016.

More than 30 energy companies showed interest in developing the Titcomb site after SunEdison backed out. Kearsarge Energy won the project in 2017 and the city is expected to make $3.5 million from the lease of the property over the next 20 years.

“It’s like we say in the solar industry, a project is not a project until it has died and come many times back to life,” Kearsarge Energy president Andrew Bernstein said. “This one certainly had some challenges.”

Kearsarge Energy also signed a payment in lieu of taxes agreement (which compensates the city for some or all of the property tax revenue lost due to tax-exempt, federal land ownership) with the city and a purchase power agreement with National Grid will also gives Amesbury credit for the electricity generated on the Titcomb site.

“There are always three components to solar,” Barrasso said. “For Titcomb, we have the PILOT program, we have the lease, then we have the energy credits and Amesbury becomes a generation point for electricity going into the grid and it is from a renewable, green source. There is no giant cable that goes back into the ground, it all goes off into the grid.”

Barrasso also said the privately owned Citizen’s Energy site also signed a payment in lieu of taxes agreement with the city which receives roughly $80,000 a year.