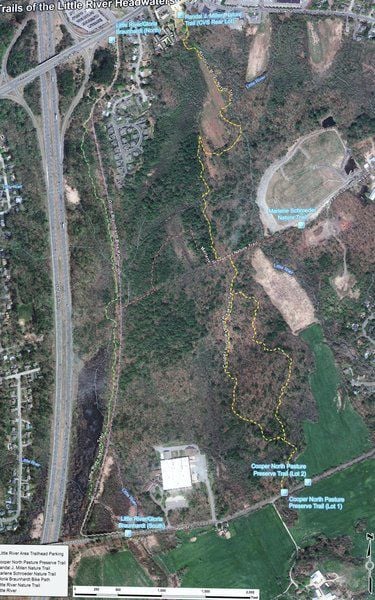 An aerial photo/map of the Little River Trail system. Interstate 95 is at left. 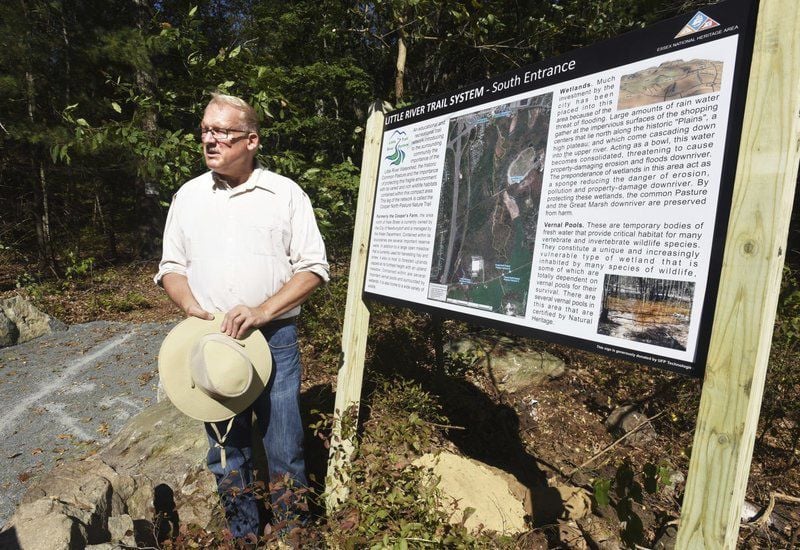 An aerial photo/map of the Little River Trail system. Interstate 95 is at left.

NEWBURYPORT — This community has two dozen municipal parks and at least one “system.”

That would be the Little River Trail System, and in recent weeks it has been expanding its offerings and making its presence known.

A parking lot with a descriptive map was recently created on Hale Street. New entrances have also been developed on Storey Avenue behind the new CVS Pharmacy and on Crow Lane near the recycling center.

It appears that this trail system, with wetlands, is about to join the local recreational vernacular as a place to hike and observe wildlife.

“This is a great place but not many people know about it,” said Jerry Mullins, president of the Parker River Clean Water Association, which, with the city, supervises the forest.

“New signage, improved trails, parking and help from corporate owners are now making this a place for recreation, and within the confines of the city,” he said

The association is a community-based, nonprofit organization dedicated to promoting the restoration and protection of the waters and environment of the Parker River and Plum Island Sound watersheds, according to its mission statement.

The Little River Trail System, one of its projects, is composed of numerous trails and a pedestrian/bike route that goes through forested areas between Storey Avenue and Hale Street.

Caretakers say the total walking length is about five and a half miles, and this area is approved for off-leash dog walking.

Those who have walked the trail say the wildlife to be seen include deer, fox, coyotes and many types of birds.

In recent months, local Boy Scouts have put in bridges over bogs, and signs have been posted at entrances on Hale Street, Storey Avenue and Crow Lane.

“I had driven past this area but never stopped,” said visitor Julia Tiernan, who walked the trail recently. “Today, I went in for about a mile and I enjoyed it. It’s a good trail and a pleasant walk.”

The Newburyport resident said the expanded parking area and the new signs made her aware of its presence.

Mullins said one reason the project has thrived is because of Community Preservation Act funding, a financial resource created by local tax revenue to pursue preservation and other projects.

Land was purchased with CPA money that preserved wetlands and open space between Storey Avenue and Hale Street.

The wetlands serve as a “sponge” for water runoff, and limits the amount of stormwater that enters the nearby business and industrial park, Mullins said.

Joseph Teixeira, chair of the municipal Conservation Commission, said he is pleased with development of the system.

“As the headwaters of the Little River, it was particularly important that this area be maintained as open space to keep its wetlands healthy, which helps mitigate flooding in the housing and industrial areas downstream,” Teixeira said.

“If this area was heavily developed, as was once planned, I believe flooding downstream would be much worse,” he said. “The wetlands and uplands in this area also provide important contiguous habitat for many species.”

Signs adjacent to trails include recognition of two local preservationists who worked to improve the forest, the late Marlene Schroeder and Randal J. Millen. Schroeder was a retired teacher who was an energetic volunteer in helping to preserve open space in the community. Millen was a farmer in the area for many years.

Dyke Hendrickson covers Newburyport. He can be reached at 978-961-3149, or at dhendrickson@newburyportnews.com.

More on the trail system

Here is a link to a graphic that shows the Little River Trail System: http://essexheritage.org/ts/event/walk-little-river-trail-system.