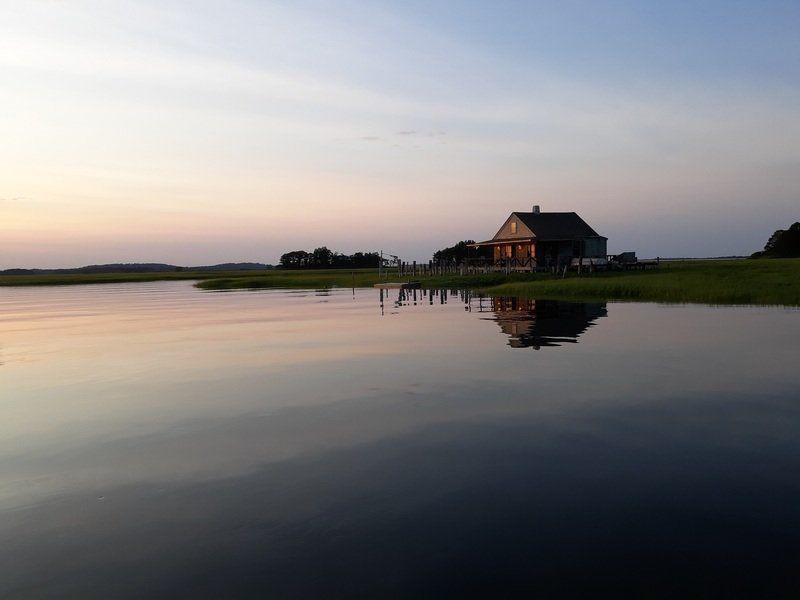 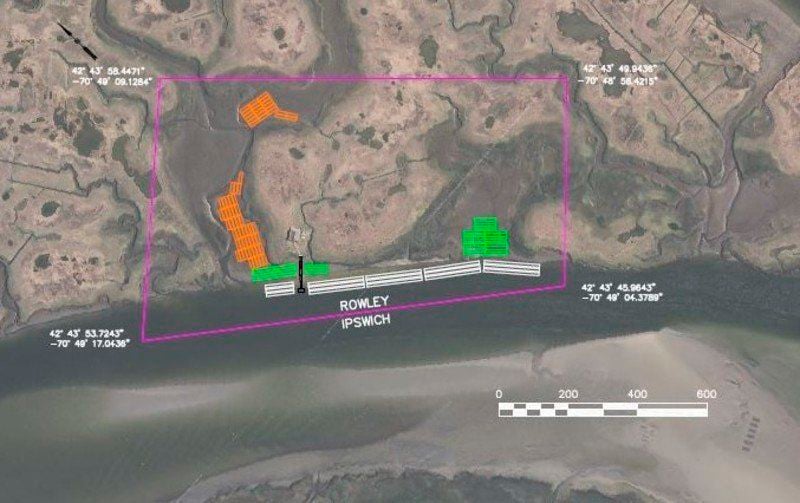 Courtesy imageThe purple lines mark the perimeter of where Brenden Doyle, James Barry O’Connell and Dylan Comb are seeking a shellfish aquaculture license. The site consists of a 3.8-acre section of Brown’s Flat, Hog Creek, Strawberry Inlet and the Rowley River. The orange shows where they intend to put clam nets, and the white and the green images represent the placement of floating and flip-up oyster cages.

Courtesy imageThe purple lines mark the perimeter of where Brenden Doyle, James Barry O’Connell and Dylan Comb are seeking a shellfish aquaculture license. The site consists of a 3.8-acre section of Brown’s Flat, Hog Creek, Strawberry Inlet and the Rowley River. The orange shows where they intend to put clam nets, and the white and the green images represent the placement of floating and flip-up oyster cages.

ROWLEY — A Gloucester resident seeking an aquaculture license in the Great Marsh said he hopes to pave the way for a more robust, environmentally friendly shellfish industry in town.

On Feb. 3, Doyle presented his plan for The Great Marsh Shellfish Company at a public hearing before the Rowley Board of Selectmen. His application, filed in January, requests a shellfish aquaculture license for a 3.8-acre section of Brown’s Flat, Hog Creek, Strawberry Inlet and the Rowley River.

Doyle first applied for a 10-year aquaculture license from selectmen in October. He received unanimous approval with the condition that he also obtain the required approvals from the state.

After receiving feedback from the state Division of Marine Fisheries, however, Doyle realized he needed to increase the size of the site and make room for a hatchery. About that same time, he was also informed of a strict trademark associated with the company name he had chosen, Hog Island Oyster.

These changes forced Doyle to start again, which is why he resubmitted his proposal for an aquaculture license last month.

In his pursuit of a license, Doyle is joined by his father-in-law, James Barry O’Connell — a U.S. Marine veteran and a 48-year Rowley resident — and Dylan Comb, a marine biologist from Gloucester with an interest in shellfish restoration. Together, they make up The Great Marsh Shellfish Company.

They are seeking a license for commercial, environmental and educational purposes.

While Doyle hopes to focus on oysters and soft-shell clams, he said the license he applied for will allow the men to pursue a range of shellfish, including scallops, mussels and quahogs. The group’s proposal includes the use of floating cages, flip-up cages and clam nets.

The plan would be spread out over 10 years, so not everything would be put in place right away. The first year would be spent establishing floating shellfish cages and beginning the harvest process, which would occur every three months, they said.

The environment is a major motivator for them, though. As Comb explained during the presentation, the oyster industry was once thriving in the area, but pollution, disease, habitat alteration and overharvesting led to a decline in oysters.

That’s why Doyle wanted to expand his license to include an oyster hatchery. With a hatchery, they can produce their own seed, or “spat,” and share that seed with oyster restoration projects, helping to rebuild the shellfish population.

The hatchery aspect is not typically “viable” or “profitable,” Doyle said. It will be a lot of work, but he is hopeful for how it could benefit the environment.

Oysters could benefit the local ecosystem. In the Great Marsh, high levels of nitrogen are a major threat and oysters help reduce the nitrogen in the water. One oyster, for example, can filter as much as 50 gallons of water a day.

“I want to not just do this, but I want to actually improve the water,” Doyle said. “I’m very big on, ‘Think globally, act locally.’”

Educationally, Doyle and Comb want to partner with local schools, encouraging field trips and exploration of the Great Marsh. They have already connected with the Cat Cove Marin Laboratory at Salem State University, where they will be sourcing their shellfish seed.

One of the biggest questions people had at the public hearing last week had to do with navigation. Some were concerned about how much space the floating cages would take along the bank of the Rowley River.

Of the approximately 50 people in the audience, many were boaters or people who use that portion of the river. Doyle presented a map completed by Donohoe Survey Inc. revealing close to 200 feet of water.

After the group’s presentation, Bill DiMento provided his own unbiased research as Rowley harbormaster, proving that navigation would not be an issue even in the worst-case scenario. Jenna DiMento, the assistant harbormaster, showed photos and videos she took of the area at low tide.

The group’s proposed floating cage setup is 32 feet wide. For research purposes, Jenna DiMento said if the cages took up 40 feet, the remaining channel at dead low tide would be about 150 feet wide. Bill DiMento said navigation was his primary concern, but he is no longer concerned that even two boats could fit.

In addition, Doyle said the floating cages provide a buffer for boats and the shoreline. As a frequent fisherman and boater, Doyle is aware of how boating disrupts the marsh. The floating cages on the bank of the river would lessen that impact, he said.

The public hearing was continued to March 23. In that time, Bill DiMento will work with the group to finalize any concerns before submitting his thoughts to the Board of Selectmen.

Speaking to The Daily News, he said, “As harbormaster, I am pretty much bound to make sure anything that happens in Rowley’s jurisdiction waterways are not going to become hazards to navigation.”

He said he was pleased with the turnout at the hearing. Bill DiMento also said his only concern is the possibility of overwintering of oysters, and he is working with Doyle and Comb to discuss options. Oysters are dormant during the winter but they can’t be allowed to freeze, so their cages have to remain submerged.

If the selectmen approve this license, then the group will pursue a state permit from the Department of Marine Fisheries and a federal permit from the U.S. Army Corps of Engineers.