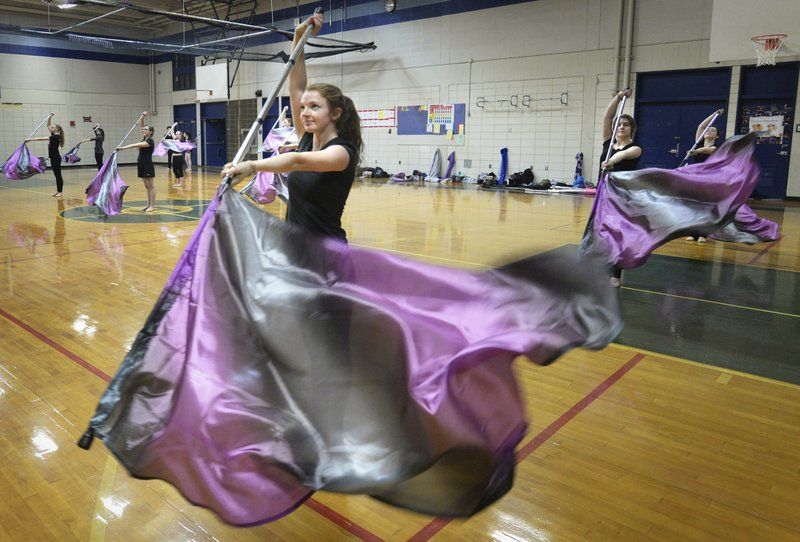 BRYAN EATON/Staff Photo. Color guard with flags and sabres rehearse for Saturday’s Winter Show, which includes the Percussion Group in the competition. Triton is hosting for the first time, sponsored by the Triton Music Parents Organization.

BRYAN EATON/Staff Photo. Color guard with flags and sabres rehearse for Saturday’s Winter Show, which includes the Percussion Group in the competition. Triton is hosting for the first time, sponsored by the Triton Music Parents Organization.

With 14 area high schools including Pentucket, Salem, Lowell, Dracut and Melrose, and independent groups competing, it promises to be an exciting evening of artistic and performance arts competition.

Under the auspices of the Triton Music Parent Organization, the event marks the first time that Triton will sponsor the event. There will be refreshments and a raffle.

According to World Guard International, “modern color guard is a combination of the use of flags, sabers, mock rifles and other equipment, as well as dance and other interpretive movement.” Its purpose is to promote appreciation and understanding of the musical, visual and performing arts while striving for excellence through competitive performance.

The percussion group performs with drums, bells, guitars, marimbas and other percussion instruments. They perform while marching as well as standing, which is referred to as concert percussion. According to World Guard International, “depending on the financial situation and the creativity of the design team, sets can be created to help the audience engage in the performance to a greater depth.” Members of the percussion band will also dress in theatrical costume rather than marching band uniforms.

“It takes a lot of motivation, discipline and dedication to participate, as the season runs from November to April,” said Liz Butler, one of the advisers to the Triton Winter Guard and Percussion Group. “The students are hardworking and committed. They work as hard as any sports team and use the same skills and strength to perform.”

Butler and her husband, Neil, have been leading the Triton Guard for the past five years under the direction of Sue Densmore, music teacher and director of artistic programs.

NESBA is the organization that determines the division and class of the groups performing based upon past performances. Triton’s Winter Percussion will compete in the Percussion Scholastic Marching A class while Triton’s Winter Guard will compete in the Guard Scholastic Regional A class. They will be competing head to head with Pentucket for the first time in this class.