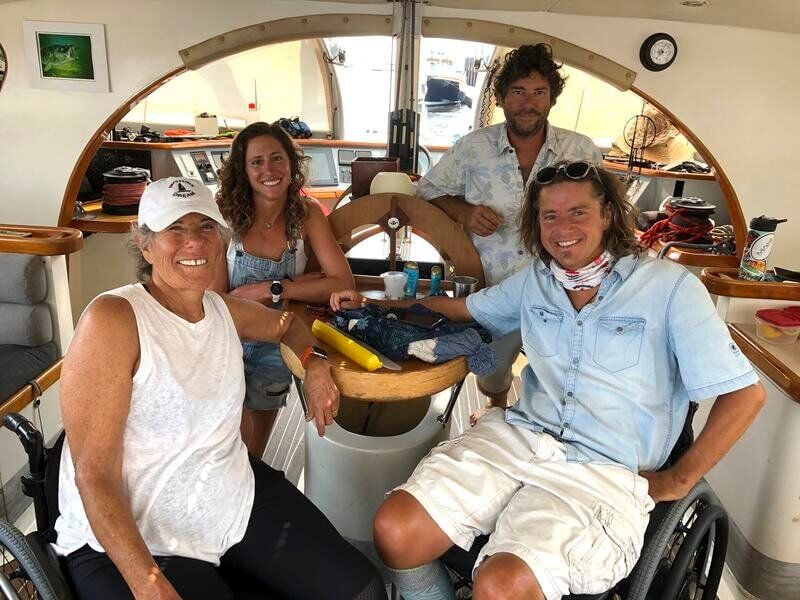 With the helm in the background, from left, Deborah Mellen, CEO and founder of Impossible Dream Inc., first mate Paulina Belsky, Captain Will Rey and board member David McCauley during the accessible catamaran's visit to Newburyport this week. 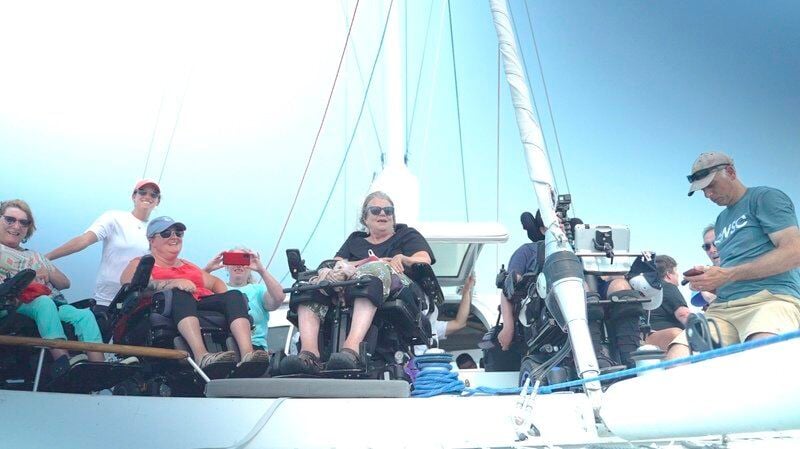 Some of the guests lining the bow of The Impossible Dream during a sailing trip this week. 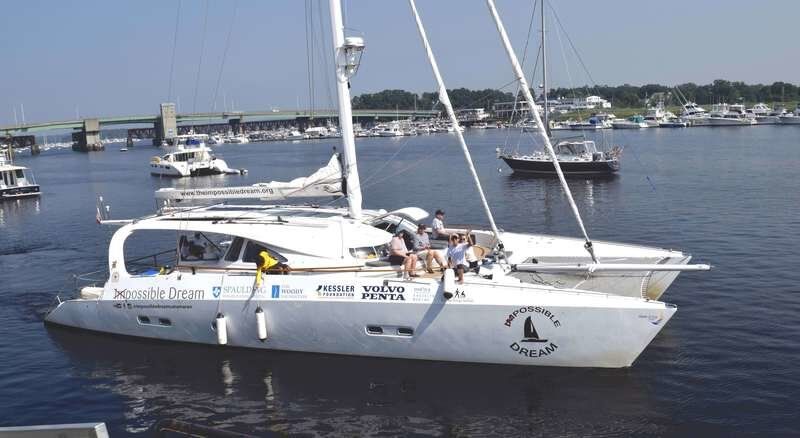 The catamaran Impossible Dream motoring out of the harbor for a sail on the open ocean this week. 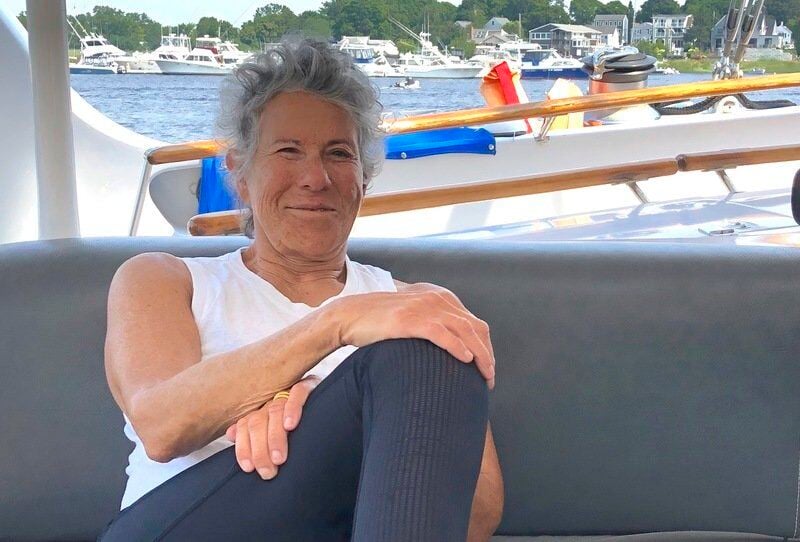 With the helm in the background, from left, Deborah Mellen, CEO and founder of Impossible Dream Inc., first mate Paulina Belsky, Captain Will Rey and board member David McCauley during the accessible catamaran's visit to Newburyport this week.

Some of the guests lining the bow of The Impossible Dream during a sailing trip this week.

The catamaran Impossible Dream motoring out of the harbor for a sail on the open ocean this week.

Then, she grimaces. Neither she nor crew member David McCauley could ascend the stage to accept the award.

Like countless sidewalks, restaurants, shops, buildings and other places they encounter, the stage had no ramp for their wheelchairs. But all was not lost. It was a learning experience for race organizers who acknowledged, "We have a lot to learn and a lot of work to do."

McCauley, 45, who suffered a spinal cord injury in 2008, said many people aren't aware of the hurdles wheelchair users routinely face.

"We're looking down, problem-solving every time we're moving," he said in an interview aboard The Impossible Dream, a fully wheelchair-accessible catamaran docked this week on Newburyport's waterfront.

This is the vessel’s fourth visit since 2018 to Newburyport, where the crew has been giving two-hour sailing trips to senior citizens and people with disabilities – all for the enjoyment of the sea.

"There's magic on this boat and it's because everyone really cares," Mellen said, referring to a rotating crew of volunteers, and especially, McCauley, Captain Will Rey, Paulina Belsky, the first mate, and Beno, Mellen's 7-month-old Portuguese water dog.

Mellen, who is in her 60s and has used a wheelchair since she was in a car crash 30 years ago, bought the 58-foot carbon fiber sailing catamaran in 2013.

Together with Harry Horgan, the founder of Shake-A-Leg Miami, Mellen founded the nonprofit Impossible Dream Inc.

The boat is based in Miami, and in its trips up and down the East Coast, the catamaran connects with rehabilitation centers, including Spaulding Rehabilitation Hospital in Boston, as well as disability rights advocacy groups and spinal cord injury research institutions.

McCauley and Mellen talked about the connections they make with people who have been in rehabilitation for spinal cord injuries and feel they are at the lowest point in their lives.

"We bring a little light in the darkness," McCauley said. "They see us, we talk with them, they see what we do. An injury is an equalizer" because they know McCauley and Mellen have been through similar trauma and rehabilitation.

"They're connected to this, whether you're in rehab for two months or six months," McCauley said. "Everybody has had to struggle with that same thing."

Here in Newburyport, American Yacht Club member Alan Gamble is one of the local "ambassadors" who handle the logistics for the catamaran, lining up visitors to come onboard when the boat visits a port.

"I first learned about them while watching a YouTube video," Gamble said in an email. "I reached out to them and asked if they might be interested in making Newburyport a part of their itinerary and the rest is history."

Since 2015, the catamaran has sailed more than 40,000 miles, stopping in ports as varied as Baltimore, Brooklyn, New York, Martha's Vineyard and Kennebunkport, Maine, giving thousands of guests the joy of a sailing jaunt.

"When we have an ambassador, they do the logistics," Mellen said Tuesday. "That really makes it doable."

McCauley and Mellen said even visitors who might express trepidation about being on a boat are instantly taken in once they're onboard.

Children and adults who use wheelchairs see McCauley and Mellen easily moving around the accessible deck of the craft, with its varnished railings, smooth surfaces and spacious helm. It can accommodate two dozen people on a two-hour sail, including a dozen in wheelchairs.

With the boat and diverse crew, Mellen said, "We're changing perceptions about what it means to be disabled. It has opened up so many things that were unexpected."

Many people walking by the catamaran in port are surprised to see wheelchair users on a boat, and that opens up many conversations. Why shouldn't someone with a disability be able to enjoy the same things as everyone else? Mellen asked.

"People think of us as homebound," she said. "We're locked in because we can't get anywhere."

"We can't meet the demand" from groups wanting to go for a sail, Mellen said. That demand has led to discussions – but no fundraising yet – about building an 80-foot boat that could accommodate larger motorized wheelchairs and have room below deck for spacious quarters with overhead tracks and pulleys for more accessible living.

The catamaran's visit here coincided with the 31st anniversary of the day (July 26) then-President George H.W. Bush signed the Americans with Disabilities Act, an early step to mandate accessible buildings, public infrastructure and other accommodations.

Mellen recalled docking The Impossible Dream in 2014 in Kennebunkport, where the Bush family summered. The former president had recently suffered a fall and was in a wheelchair. At Mellen’s colleague’s suggestion, he came onboard.

"'Yeah, but he signed the ADA. That's exactly why we want him on the boat.'"

So the Bushes joined the catamaran crew for sailing, lunch, a few glasses of wine and some friendly political debate.

"They had a great time," Mellen said with a smile.

The Impossible Dream is scheduled to leave today, July 29, for Portland, Maine.

For more on the web: www.theimpossibledream.org.

Richard K. Lodge is editor of The Daily News.