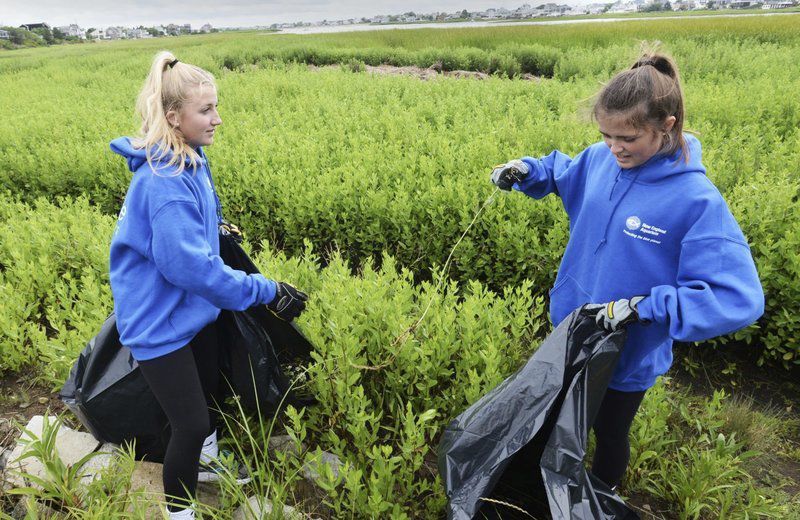 BRYAN EATON/Staff photoEllie Hoffmeister, left, and Jessica McAward, both of Needham, put pepperweed into plastic bags in the Plum Island Basin. They are helping to control the invasive species. 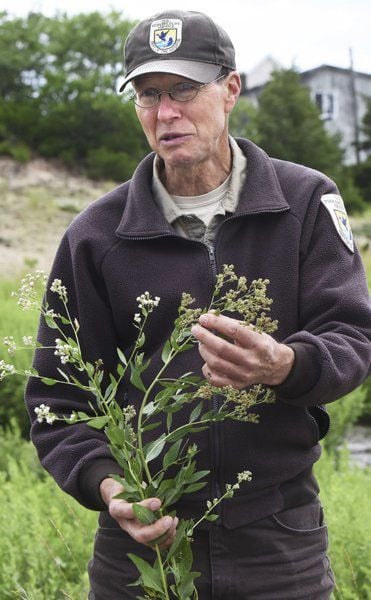 BRYAN EATON/Staff photoDavid Tibbetts of the Parker River National Wildlife Refuge shows students what pepperweed looks like during their visit to the refuge Tuesday.

BRYAN EATON/Staff photoEllie Hoffmeister, left, and Jessica McAward, both of Needham, put pepperweed into plastic bags in the Plum Island Basin. They are helping to control the invasive species.

BRYAN EATON/Staff photoDavid Tibbetts of the Parker River National Wildlife Refuge shows students what pepperweed looks like during their visit to the refuge Tuesday.

NEWBURYPORT — Volunteers came to Plum Island on Tuesday to help fight the rapid spread of a plant that is threatening the biodiversity of local salt marshes.

Pepperweed is a highly invasive herb native to the Mediterranean that arrived on the North Shore about 15 to 20 years ago. Since then, it has spread into thousands of patches in the Great Marsh and Parker Wildlife River Refuge.

The plants usually grow between 2 and 5 feet tall with clusters of white flowers, and each produce thousands of tiny seeds. The seeds can be spread quickly by the tides throughout a salt marsh ecosystem, using the salt as a chemical weapon to damage and outcompete native plant species, threatening the area's biodiversity.

"This plant is capable of creating monocultures, which are a single species within those infested areas because they crowd everything else out," said David Tibbetts, the invasive plants coordinator for Parker River Wildlife Refuge. "If it was left unchecked, the entire upper edge of the marsh would convert into a solid ridge of pepperweed."

Pepperweed invaded the West Coast in the mid-20th century, where Tibbets said it has caused financial problems for cattle farmers.

"It's been much more of a problem out west," he said. "It's infested rangelands but is toxic to livestock, so it decreases the value for grazing."

Tibbetts also said the plant can be a host for cabbage worm, a pest for agricultural crops in the mustard family.

"This is a major problem for a lot of farmers who are growing vegetables in that they have to treat for it," Tibbetts said. "Economic loss for controlling cabbage worm is huge."

He led eight teenage volunteers from the New England Aquarium’s Live Blue Ambassadors program out to the Plum Island Basin on Tuesday morning to pull up plants by hand.

The Live Blue Ambassadors are part of a growing network of volunteers who have been working on pepperweed removal since 2006. The network includes Mass Audubon, the U.S. Fish and Wildlife Service, the Massachusetts Bays Estuary Program and the Newburyport Gulf of Maine Institute Team.

The volunteers came from their hometowns around the state to participate. Wearing boots and gloves and carrying garbage bags, they spent the morning helping to clean out a local salt marsh that was littered with pepperweed.

"Right now, helping the environment is so critical, so the work we're doing comes at a good time," said Sam Lee, 17, of Winchester. "I feel like we're doing something useful."

For some of the teens, the program was a way of completing volunteer hours required by their schools.

"It's nice to be outside doing my volunteer hours and to be helping out the environment," said Sam Reisner, 14, of Newton.

So far, Tibbetts said local efforts have been effective in keeping the plant's numbers at bay, with an eventual goal of eradicating the species from the area.

"We're cutting off the seed supply," he said. "If we didn't treat the population here, we're talking about billions and billions of seeds being dispersed in a single growing season."

Pepperweed is also controlled by using herbicides but Tibbetts said in many cases, it may cause damage to surrounding native plants and that hand pulling can be more sensible.

But Tibbetts said the window for removing the plants by hand is relatively short and is only practical throughout the month of July.

"The seeds turn black as they mature, so once they do, we don't disturb the plants because it can spread seeds," he said. "We only have a few sites left to cover this week, so we're here at the very end of it."

For more about pepperweed, go to www.massaudubon.org/learn/nature-wildlife/invasive-plants/pepperweed

Jack Shea can be reached via email at jshea@newburyportnews.com or by phone at 978-961-3154. Follow him on Twitter @iamjackshea

Don't get shut out of Merrimac's newest 55+ community