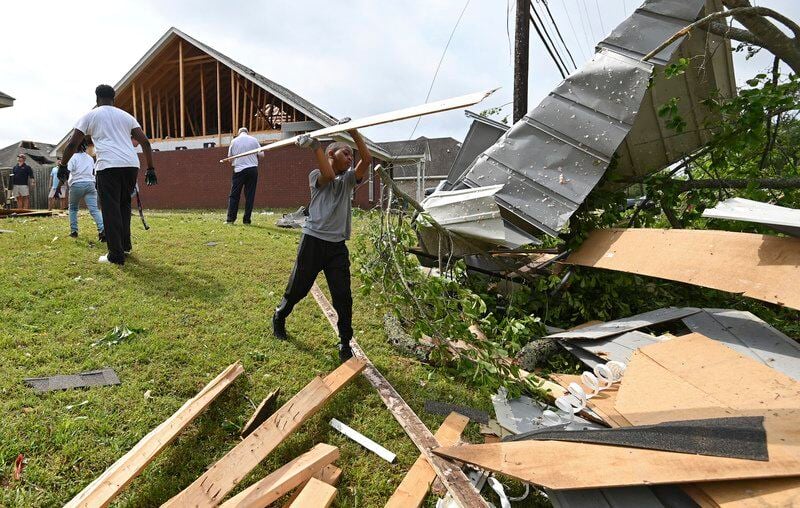 AP photo/Thomas GraningDerrick Pounds Jr. helps his father clean up debris around their home in Tupelo, Miss., on Monday. Multiple tornadoes were reported across the state. 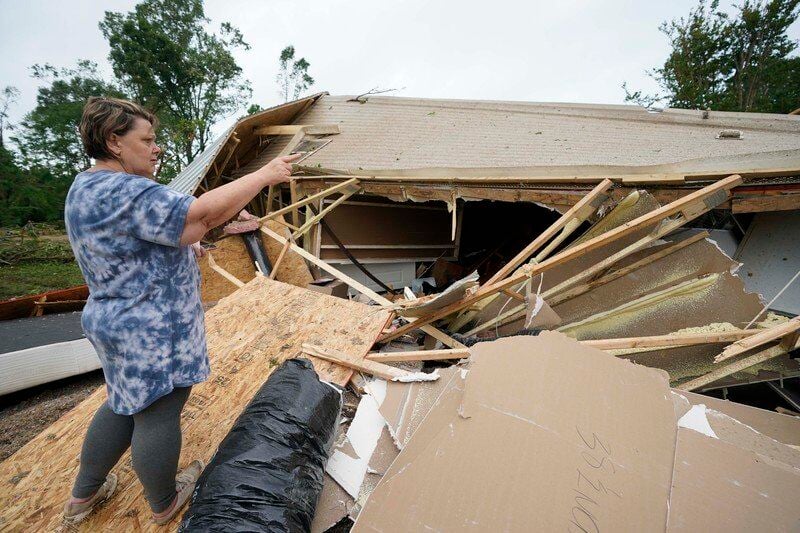 AP photo/Rogelio V. SolisVickie Savell gestures while looking at the remains of her new mobile home Monday in Yazoo County, Miss. Multiple tornadoes were reported across Mississippi on Sunday.

AP photo/Thomas GraningDerrick Pounds Jr. helps his father clean up debris around their home in Tupelo, Miss., on Monday. Multiple tornadoes were reported across the state.

AP photo/Rogelio V. SolisVickie Savell gestures while looking at the remains of her new mobile home Monday in Yazoo County, Miss. Multiple tornadoes were reported across Mississippi on Sunday.

BIRMINGHAM, Ala. (AP) — Much of the South faced more severe weather Tuesday that has killed at least three people, spawned tornadoes Sunday night and Monday, and damaged homes and uprooted trees from Mississippi to West Virginia.

Parts of Texas, Louisiana, Mississippi, Alabama and Tennessee, as well as corners of Arkansas and Georgia, were at enhanced risk for the worst weather, according to the national Storm Prediction Center. That zone is home to more than 11 million people and includes the cities of Nashville, Tennessee; Birmingham, Alabama; Baton Rouge, Louisiana; and Jackson, Mississippi, forecasters said.

With warnings about possible tornadoes stretching from Louisiana eastward, dozens of school systems in Mississippi and Alabama dismissed students early so buses and cars would not have to be on the road during potentially violent weather. Torrential rains flooded streets around metro Birmingham, Alabama.

A Tennessee woman died when a tree fell on her home as storms moved through the state Tuesday, Weakley County Emergency Management Director Ray Wiggington told WKRN-TV. He said at least six mobile homes were damaged by the falling tree about 4 a.m.

At least eight people were injured when storms that brought tornadoes to Texas flipped tractor-trailers on an interstate and damaged structures. Three drivers were hospitalized, one with serious injuries, after their tractor-trailers overturned in the storms Monday night along Interstate 35 near Waxahachie, about 30 miles south of Dallas, officials said. A National Weather Service spokesman said a tornado occurred in the area but they were still trying to determine its intensity.

In addition to the injured tractor-trailer drivers, five others in Texas were hospitalized after the storm came through Ellis County, an official said. County Judge Todd Little told KXAS between 25 to 50 structures were damaged, but they had no fatalities.

The storms Tuesday were expected to include wind gusts of up to 70 mph and hail to the size of golf balls, forecasters said, noting that “tornadoes are likely Tuesday into Tuesday evening” in parts of Mississippi. Some tornado warnings were issued Tuesday morning in rural areas east of Nashville, Tennessee.

A tornado warning in Atlanta forced thousands to seek shelter Monday and a man was killed when a falling tree brought power lines onto his vehicle in Douglasville, Georgia, west of Atlanta, Douglas County spokesman Rick Martin said. And in middle Georgia, Carla Harris, 55, was killed after a tree fell on her Bonaire home, Houston County emergency officials said.

The weather first turned rough in Mississippi on Sunday, where just south of Yazoo City, Vickie Savell was left with only scraps of the brand-new mobile home where she and her husband had moved in just eight days ago. It had been lifted off its foundation and moved about 25 feet. It was destroyed.

“Oh my God, my first new house in 40 years and it’s gone,” she said Monday, amid tree tops strewn about the neighborhood and the roar of chainsaws as people worked to clear roads.

In Mississippi, forecasters confirmed 12 tornadoes Sunday evening and night, including the Yazoo City twister, which stretched for 30 miles, and another tornado that moved through suburbs of Byram and Terry south of Jackson that produced a damage track 1,000 yards wide. On Monday, tornadoes also touched down in South Carolina and southern Kentucky while a possible tornado hit West Virginia.