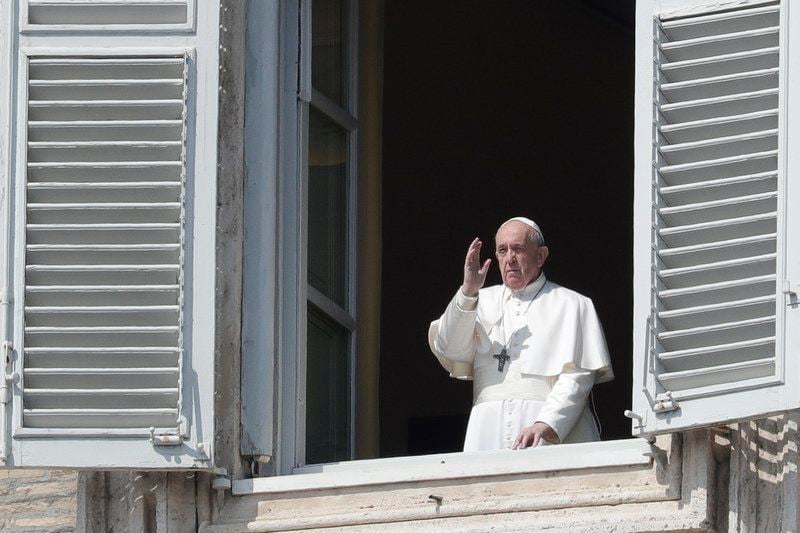 Pope Francis delivers his blessing from the window of his private library overlooking St. Peter's Square, at the Vatican, Sunday. During his weekly Sunday blessing, held due to virus concerns in his private library in the Apostolic Palace, he urged all Christians to join in reciting the "Our Father" prayer Wednesday at noon. (AP Photo/Andrew Medichini) 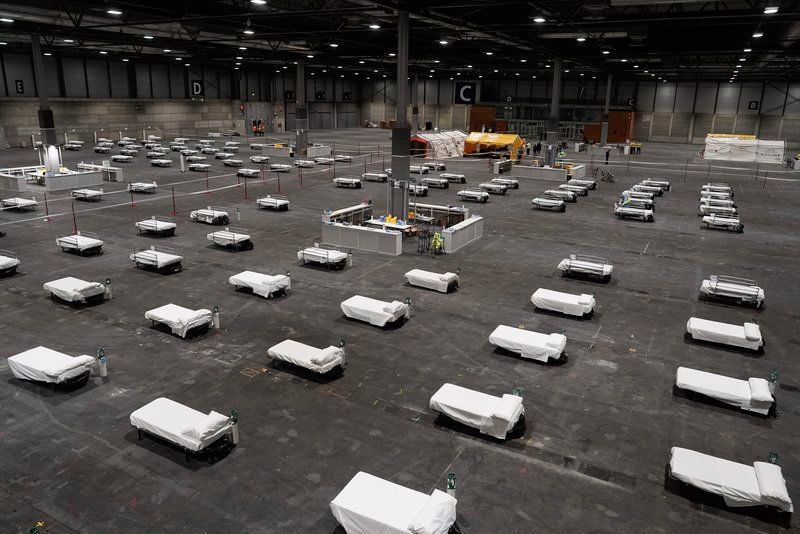 In this photo provided by Comunidad de Madrid, beds for COVID-19 patients are placed at IFEMA convention center in Madrid, Spain on Saturday. Spanish health authorities have acknowledged that some intensive care units in the hardest-hit areas are close to their limit. The army was building a field hospital with 5,500 beds in a convention center in Madrid, where hotels are also being turned into wards for virus patients without serious breathing problems. (Comunidad de Madrid via AP)

Pope Francis delivers his blessing from the window of his private library overlooking St. Peter's Square, at the Vatican, Sunday. During his weekly Sunday blessing, held due to virus concerns in his private library in the Apostolic Palace, he urged all Christians to join in reciting the "Our Father" prayer Wednesday at noon. (AP Photo/Andrew Medichini)

In this photo provided by Comunidad de Madrid, beds for COVID-19 patients are placed at IFEMA convention center in Madrid, Spain on Saturday. Spanish health authorities have acknowledged that some intensive care units in the hardest-hit areas are close to their limit. The army was building a field hospital with 5,500 beds in a convention center in Madrid, where hotels are also being turned into wards for virus patients without serious breathing problems. (Comunidad de Madrid via AP)

Italian Premier Giuseppe Conte went on live TV to announce that he was tightening the country's lockdown and shutting down all production facilities except those providing essential goods and services.

''We are facing the most serious crisis that the country has experienced since World War II,'' Conte told Italians during a broadcast at midnight.

Scientists have argued that avoiding even one infection means scores more are prevented down the line.

Doctors and nurses in Britain made urgent pleas for more protective equipment as the number of coronavirus patients in U.K. hospitals soared.

Almost 4,000 medical workers signed a letter to the Sunday Times saying front-line staff felt like “cannon fodder.” They warned that medics would die if they did not receive better equipment.

New York City's mayor told people at the epicenter of the U.S. pandemic that it's only going to get worse.

Mayor Bill de Blasio said Sunday on NBC's "Meet the Press" that his city is in desperate need of ventilators and other medical supplies and staff, and lambasted the White House as non-responsive. He said he had asked "repeatedly" for the U.S. military to mobilize, and had heard nothing back.

Negotiators from Congress and the White House resumed top-level talks on a $1.4 trillion economic rescue package, urged by President Donald Trump to strike a deal to steady a nation upended by the coronavirus pandemic. Trump appeared confident about the nation’s ability to defeat the pandemic soon even as health leaders acknowledged that the U.S. was nowhere near the peak of the outbreak.

Nationwide, there were 26,747 cases and 340 deaths as the U.S. overtook Germany as the country with the fourth-highest number of cases, according to Johns Hopkins University. At least 38 people tested positive at New York City's Rikers Island jail complex — more than half of them inmates. Another inmate became the first in the U.S. to test positive in a federal jail.

Italy announced its biggest day-to-day increase of infections, which rose to 53,000 people, with nearly 800 new deaths. As bodies piled up in Italian hospitals, morgues and churches, and as medical workers pleaded for more help, there was no sign that Italy was yet taming its arc of contagion. Italy now has 4,825 deaths, more than all of China, where the virus first emerged late last year.

During his weekly Sunday blessing, Pope Francis urged all Christians to join in reciting the ‘’Our Father’’ prayer on Wednesday at noon. ‘’To the virus pandemic, we want to respond with the universality of prayer, of compassion, of tenderness,’’ the pope said.

Francis, who began streaming his audiences online earlier this month due to virus concerns, said he would also lead a global blessing to an empty St. Peter’s Square on Friday. The ‘’Urbi et Orbi,’’ blessing is normally reserved for Christmas Day and Easter.

In Britain, where Sunday was Mother’s Day, the government had a stark message for millions: Visiting your mother could kill her. Prime Minister Boris Johnson implored Britons to forego traditional family visits, parties and Sunday lunches.

“If your mother is elderly or vulnerable, then I am afraid all the statistics show that she is much more likely to die from coronavirus,” Johnson said. “This time the best thing is to ring her, video call her, Skype her, but to avoid any unnecessary physical contact or proximity.”

Britain’s coronavirus outbreak is not expected to peak for weeks, and staff at some hospitals have complained about shortages of ventilators and protective equipment like face masks, safety glasses, gloves and protective suits.

In their letter, British medical workers said that intensive-care doctors and anaesthetists “have been carrying out the highest-risk procedure, putting a patient on a ventilator, with masks that expired in 2015."

“NHS staff are putting their lives on the line every day they turn up to work. The reality is that many of us will get sick. Doctors are all too aware of the possibility that they will lose colleagues, as has happened in outbreaks around the world.”

Communities Secretary Robert Jenrick said that hospitals would receive new stocks of protective equipment by Sunday afternoon. The government has also ordered thousands of ventilators and has struck a deal with private hospitals to use thousands of beds and 20,000 medical staff to treat coronavirus patients.

Iran's supreme leader refused U.S. assistance Sunday to fight the virus, citing an unfounded conspiracy theory that it could be made by America. Ayatollah Ali Khamenei's comments came as Iran faces crushing U.S. sanctions over its nuclear actions. Iran says it has 1,685 deaths and 21,638 confirmed cases of the virus — a toll that experts from the World Health Organization say is almost certainly under-reported.

Worldwide, nearly 312,000 people have been infected and over 13,400 have died, according to Johns Hopkins University. About 150 countries now have confirmed cases, and deaths have been reported in more than 30 American states.

For most people, the new coronavirus causes only mild or moderate symptoms, such as fever or coughing. For some, especially older adults and people with existing health problems, it can cause more severe illness, including pneumonia. Some 93,800 people have recovered, mostly in China.

The Chinese city of Wuhan — where the global pandemic was first detected and the first city to be locked down — went a fourth consecutive day on Sunday without reporting any new or suspected cases. Wuhan must go 14 straight days without a new case in order for draconian travel restrictions to be lifted, but a special train brought in more than 1,000 car factory employees for the first time since the outbreak.

Parks and other public gathering places were reopening in China as people return to work and businesses resumed. However, the country has placed increasing restrictions on those coming from overseas.

All arrivals to Beijing from abroad must be quarantine themselves for two weeks in a hotel at their own expense. And beginning Monday, flights into the capital will be diverted to airports in other cities, where passengers will have to pass a health inspection.

China's first recent case of community infection was reported Sunday in the southern province of Guangzhou, reportedly caught from a Turkish arrival.

After recording its first two deaths, Singapore said it will fully shut its borders beginning Tuesday. All short-term visitors will be barred while returning locals will face a 14-day quarantine. Sri Lanka blocked all passenger flights and ships from entering.

Australia became the latest country to close all bars, clubs, cinemas, casinos, sporting and religious venues, while restaurants and cafes were restricted to takeout service only. Schools remained open.

Prime Minister Scott Morrison said the rules were implemented because people disregarded social distancing requirements and will be in place for at least six months.

In Spain, Europe’s hardest-hit country after Italy, intensive care units in some areas were close to their limits even before Sunday's new tally of 28,572 infections and 1,720 deaths. The army was building a field hospital with 5,500 beds in a convention center in Madrid, where hotels are also being turned into wards for virus patients without serious breathing problems.

Fernando Simón, director of Spain’s center for health alerts and emergencies, said that over 3,400 health workers have been infected, more than 10% of the total. “This is a statistic that concerns us,” he said.

Dr. German Peces-Barba, a lung specialist at Fundación Jiménez Díaz hospital in Madrid, said he expected the situation to get worse.

“We can’t just repeat the slogans that we will get through this together," Peces-Barba said. "But from inside the hospital the situation is such that if it lasts much longer we won’t be able to resist.”

The Associated Press receives support for health and science coverage from the Howard Hughes Medical Institute’s Department of Science Education. The AP is solely responsible for all content.