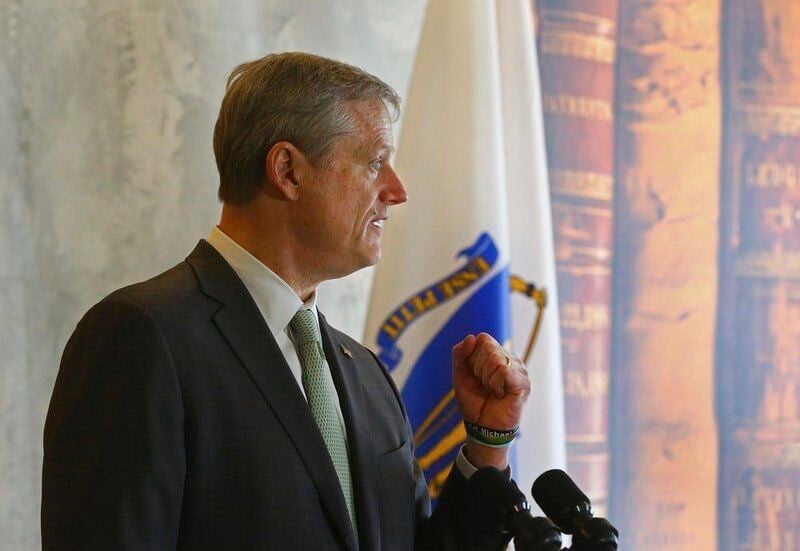 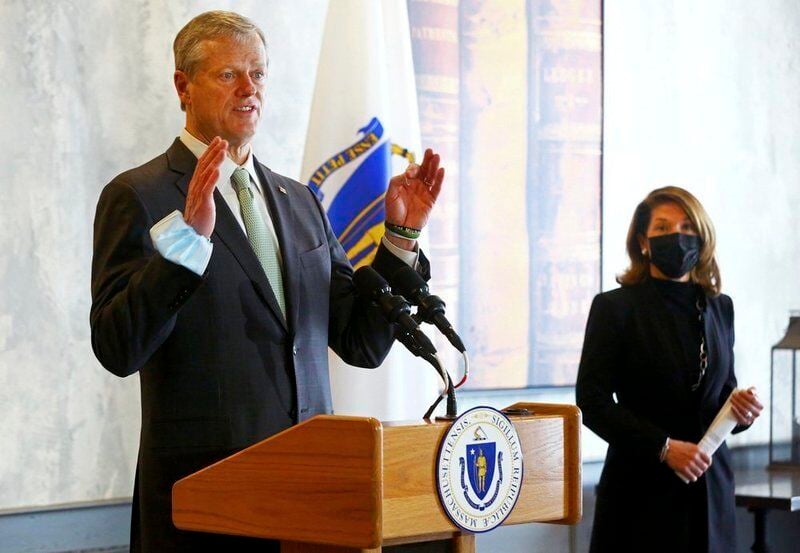 Pat Greenhouse/Boston Globe, PoolGov. Charlie Baker gives a coronavirus update on Thursday and announces reopening plans for the state at Ledger restaurant in Salem. He was joined by Lt. Gov. Karyn Polito and Housing and Economic Development Secretary Mike Kennealy.

Pat Greenhouse/Boston Globe, PoolGov. Charlie Baker gives a coronavirus update on Thursday and announces reopening plans for the state at Ledger restaurant in Salem. He was joined by Lt. Gov. Karyn Polito and Housing and Economic Development Secretary Mike Kennealy.

Starting Monday, the state will ease restrictions on some businesses and increase capacity at restaurants.

Gov. Charlie Baker announced Thursday that the state will shift back to Phase 3, Step 2 of its reopening plans. The move means businesses can operate at 50% capacity and allow indoor entertainment. Restaurants can also eliminate capacity restrictions as long as tables are more than 6 feet apart and seat no more than six people for no longer than 90 minutes.

"We're finally making some progress on a lot of things that'll dramatically improve people's abilities, and some of their choices, as we go forward," Baker said in an empty function space at Ledger, a restaurant on Washington Street in downtown Salem.

Also Thursday, Baker acknowledged problems with the state's rollout of COVID-19 vaccines during a legislative oversight hearing but argued the system has vastly improved and vowed to get more shots into people's arms.

"And yesterday, the Department of Public Health reported 1,788 new cases out of 114,127 new tests," the governor added. "That's a less than 2% positivity rate. We haven't seen numbers like that since ... you go back to October."

With that, Baker set a date for Phase 4, Step 1 — March 22, but only if the data keeps going in the right direction, he said.

"That'll make it possible for several large venues, many of them businesses that have been closed since the beginning of the pandemic, to reopen with strict safety measures in place and capacity limits," Baker said.

Venues in the category include the state's biggest: Gillette Stadium, Fenway Park and TD Garden. They can allow 12% capacity and must submit reopening plans to the state before allowing any crowds.

Phase 4 will also allow public gatherings to hit 100 people indoors and 150 outdoors, Baker said, but private gatherings will stay at 25 per outdoor gatherings and 10 indoors — far less than the number of media and public officials who were gathered at Ledger for the announcement.

Christopher Carlozzi, senior state director at the National Federation of Independent Business, praised the news. The organization has more than 5,000 members in Massachusetts.

“This reopening announcement is good news for many desperate business owners who have been forced to remain closed without revenue for months, simply because their type of business involves bringing groups of people together," Carlozzi said in a statement. "The pandemic was especially devastating for certain industries, and we can only hope this, along with widespread vaccinations bring people back to stores, restaurants, and other hard-hit businesses once again."

While testifying Thursday before the Legislature's new Joint Committee on COVID-19 Emergency Preparedness and Management, Baker defended his administration's handling of the rollout and said the process continues to be hindered by a lack of supply.

"I'm as frustrated and disappointed as anyone," Baker said during the livestreamed hearing. "The biggest challenge we face is a lack of supply from the feds."

Baker has come under growing scrutiny from Democratic lawmakers in recent weeks over the painfully slow rollout of the COVID-19 vaccine and problems with the state's online "vaxfinder" system to book appointments for shots, which crashed last week under a crush of booking requests.

The panel, which will be holding more hearings in coming weeks, was created by House and Senate leaders at the beginning of the two-year legislative session in January.

Sen. Cindy Friedman, D-Arlington, a committee member, described the vaccine rollout as "utter chaos" and said many local health care officials are "upset and demoralized" over the booking and distribution process.

"The fact that I still can't tell my constituents, honestly and with confidence, where and how many of them will get a vaccine speaks to an utter breakdown of planning and communication," she said. "So many people feel anxious, jerked around and unsure of how to navigate the system. And that's just not OK."

In a short but tense exchange, Sen. Eric Lesser, D-Longmeadow, ripped into Baker over his description of the vaccine rollout as "lumpy and bumpy."

"It has not been lumpy and bumpy, it has been failure," Lesser said. "My constituents are justifiably outraged, and asking why the governor of Massachusetts, in the health care and technology capital of the country, cannot figure out how to operate a website."

Baker said the root of the problem lies in a lack of supply. The state gets about 450,000 requests for first vaccine shots a week but only receives an average of 130,000 doses from the federal government, he said.

"The biggest challenge with the website, from the beginning, has been supply," he said. "People get frustrated, and I understand why, when they can't access an appointment."

Throughout the hearing, Baker ticked off details of the state's improving COVID-19 health metrics and increasing numbers of vaccinated people, which include some of the state's most vulnerable populations.

But lawmakers said that progress is overshadowed by problems with the vaccine rollout.

"Unfortunately, these hopeful figures do not tell the whole story," Rep. Bill Driscoll, D-Milton, the panel's co-chair, told Baker. "These numbers hide the confusion caused by frequent pivots and course corrections, and the daily frustrations residents face trying to access the vaccine."