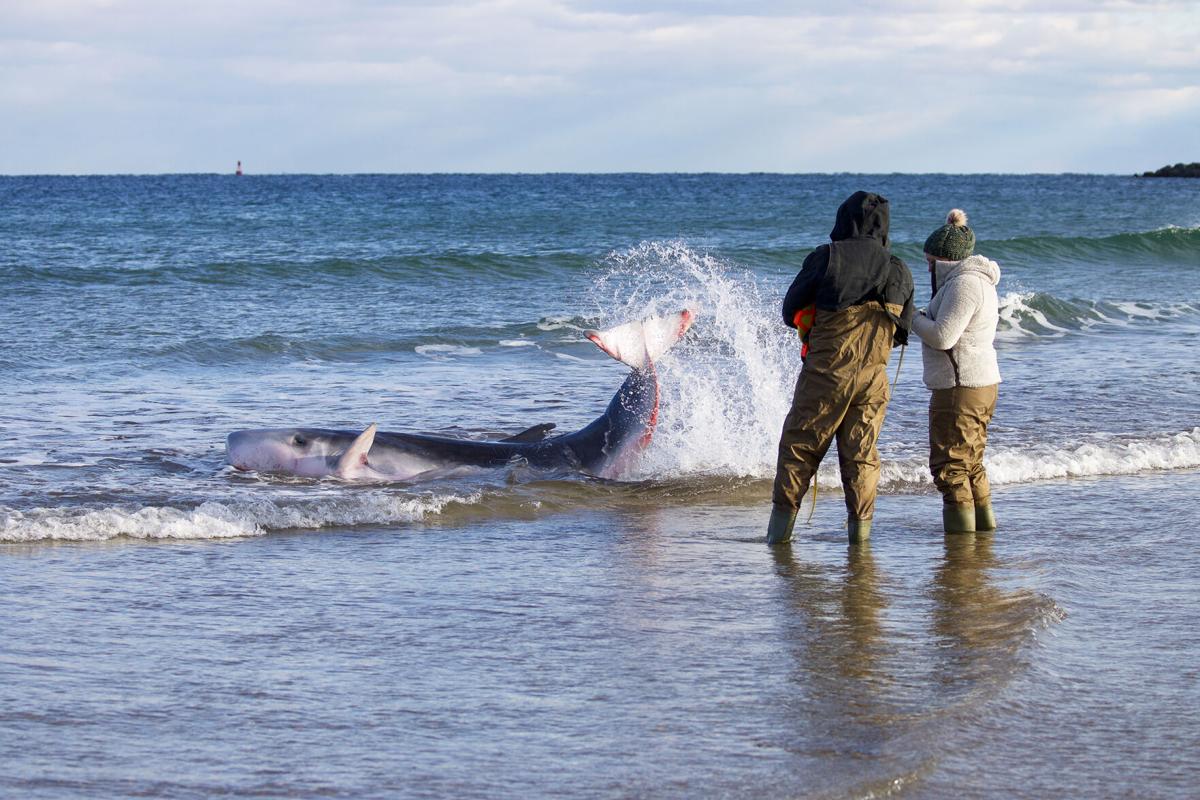 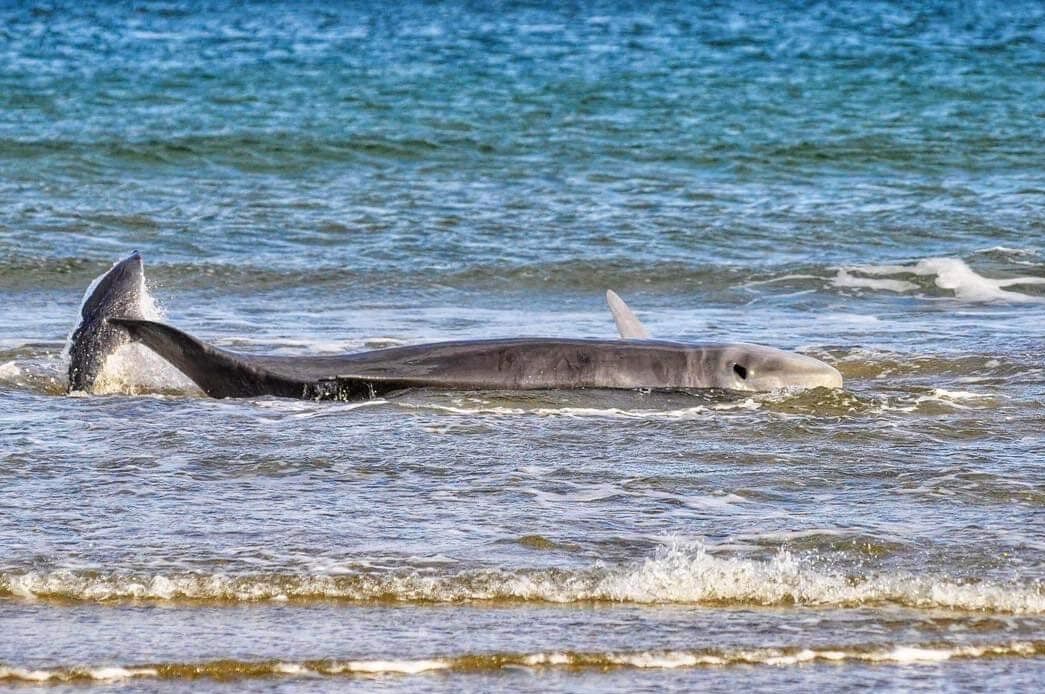 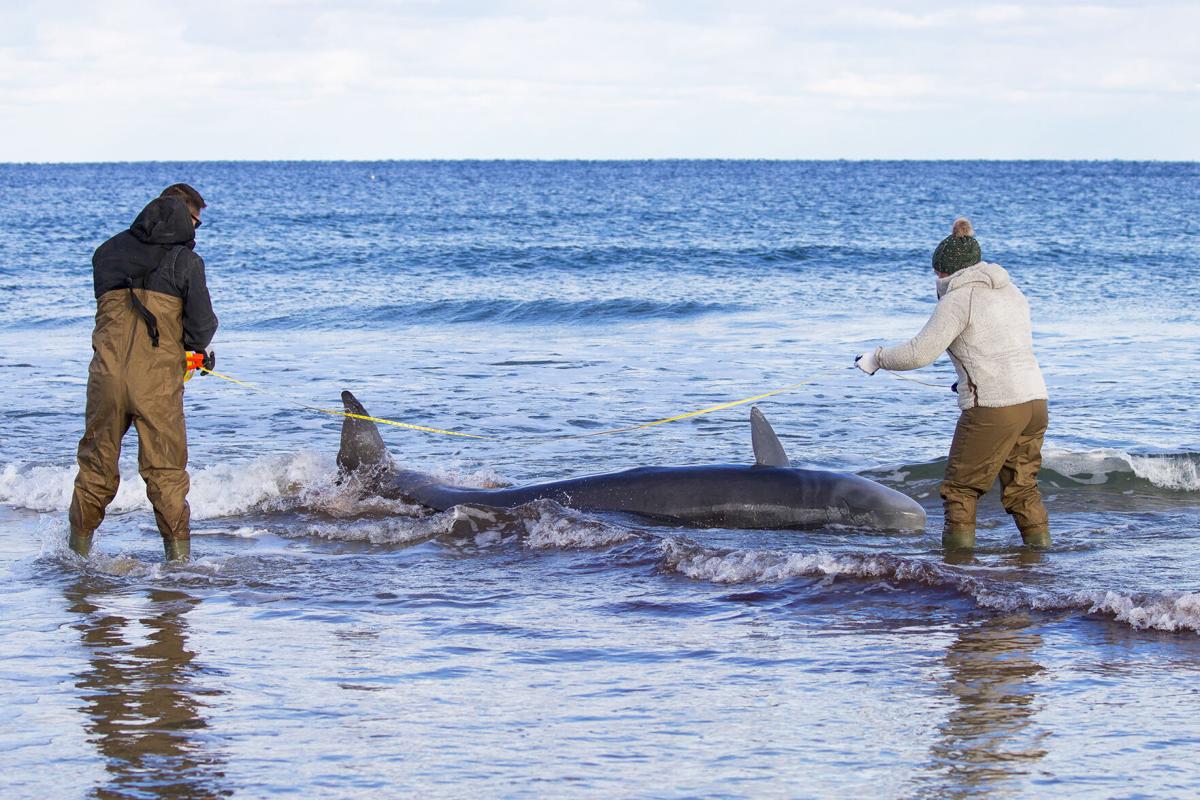 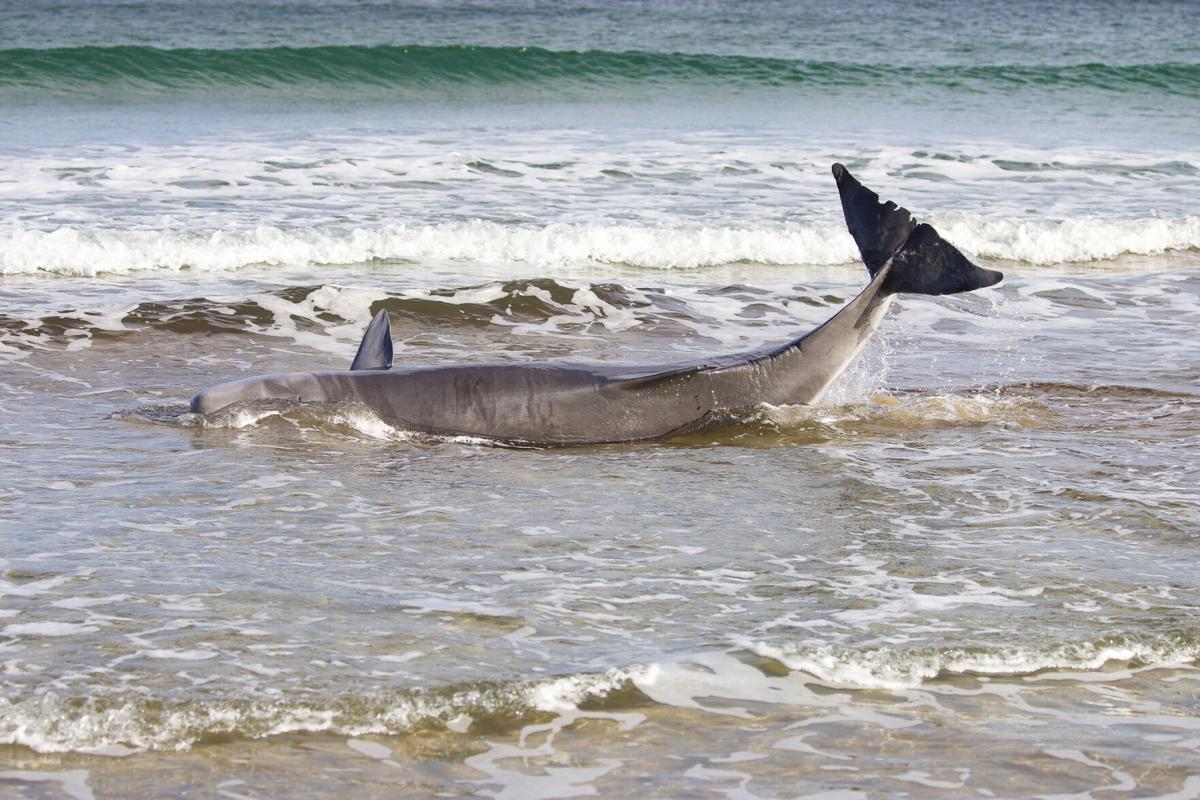 Courtesy photo/Seacoast Science Center. A pygmy sperm whale was able to refloat on its own after it was found thrashing in 8 to 12 inches of water for at least a few hours Monday. 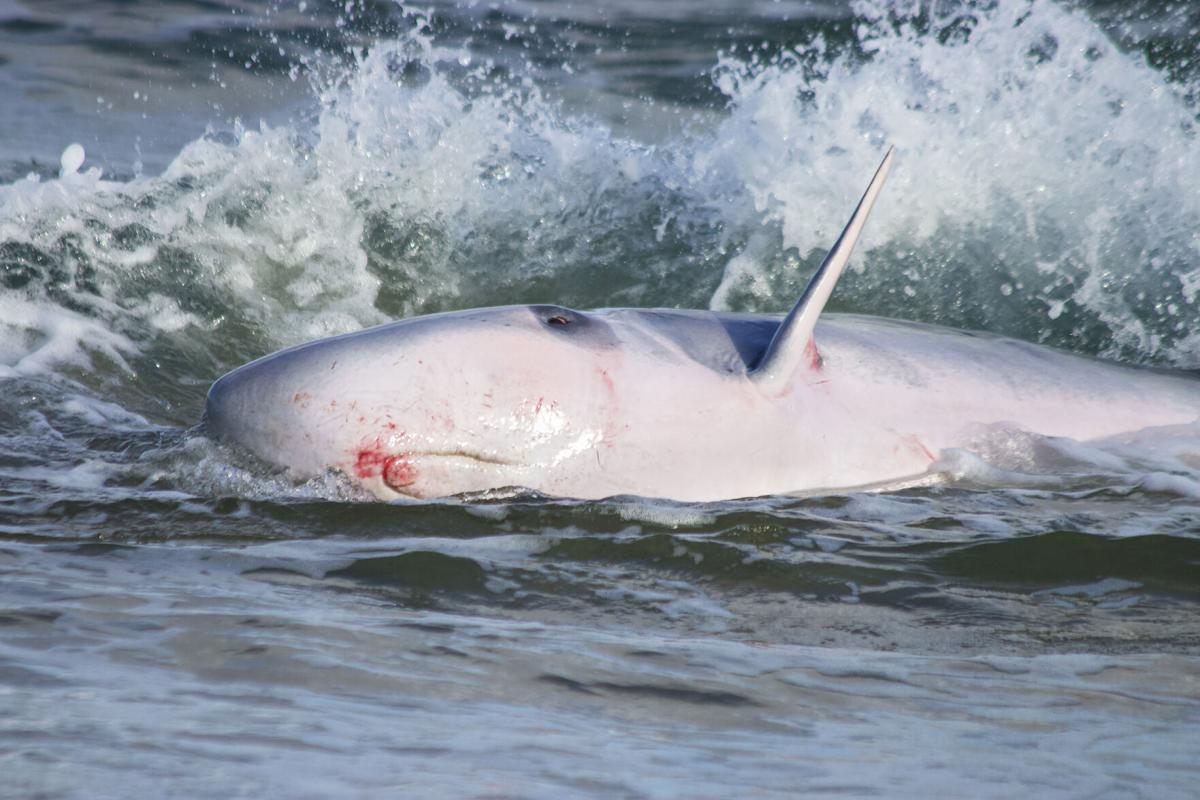 Courtesy photo/Seacoast Science Center. A pygmy sperm whale was able to refloat on its own after it was found thrashing in 8 to 12 inches of water for at least a few hours Monday.

SALISBURY — A pygmy sperm whale stranded at Salisbury Beach State Reservation was able to refloat on its own after at least a few hours in distress.

Seacoast Science Center Marine Mammal Rescue in Rye, New Hampshire, received reports of a small whale stranded on the beach Monday about 1 p.m. Arriving within 30 minutes of the reports, the rescue team found the whale “vigorously thrashing” in 8 to 12 inches of water.

Ahead of the team’s arrival, local environmental law enforcement and the state Department of Conservation at the Reservation cleared the area to ensure the whale had enough space.

The adult male, measuring 9.5 feet long and weighing about 700 pounds, had visible abrasions from being stranded in shallow water.

“This is such a unique species to see washed up, right here in our own backyard,” Brian Yurasits, community outreach manager for the rescue, said by phone, adding that he believes it may be only the second pygmy sperm whale the rescue team has seen within its response territory.

“For me, this was the first one that I’ve ever actually seen in person,” he said, noting that he has been working in this field for about nine years.

Whale sightings are not unusual for this area as highly migratory whales such as humpbacks can be spotted chasing schools of menhaden, also known as pogies or bait fish, in the summer months. These types of whales migrate south to give birth during the winter.

The pygmy sperm whale, on the other hand, is a “highly elusive, deep-water species” found in “temperate and tropical seas worldwide,” Yurasits explained.

What makes these whales different than the ones more commonly known is that these animals live a majority of their life very far out at sea, he said.

“They are what we call a pelagic species, meaning that they spend time in the open waters, deep waters, and they spend a lot of their time hunting in these deep waters,” Yurasits said. “It is highly, highly unusual to see them anywhere near shore.”

Due to limited access to the species, researchers do not know a lot about them.

“It’s a rare occurrence to see these animals in person,” Yurasits said.

When the rescue team found the whale Monday, they took time to assess the situation. Due to the frigid temperature Monday, combined with the danger of approaching the animal’s thrashing flukes, or tail, responders did not stay in the water to be safe.

The team took a lot of photos and documented any unique markings on the animal, including on the flukes and the dorsal fin, so it can be identified in the future if it becomes stranded again.

They also attempted to add a tag to the dorsal fin, but deemed it too dangerous to complete due to the animal thrashing around.

Shortly after dark and around peak high tide, the animal refloated on its own and swam offshore, the rescue reported.

A thorough search of the area Tuesday morning yielded no sign of the whale. The team is trying to be optimistic, but knows that the animal could become stranded again.

A best response practice for strandings do not include attempting to refloat these animals because they are an offshore species, and there is likely an underlying condition that caused this one to come so close to shore, the rescue reported.

Pygmy and dwarf sperm whales are highly susceptible to cardiomyopathy, or diseases of the heart muscle, according to the rescue.

Humane euthanasia is sometimes a consideration, but that was not an option Monday due to the rising tide and the risk that the animal might wash out to sea, the rescue said.

Newburyport resident Lani Shumway was a bystander on the beach as the rescue sought to help the whale.

“They were all so wonderful and informative with all of us under such a stressful situation, but they remained extremely professional,” she said of Yurasits, Marine Mammal Rescue Director Ashley Stokes and other officials on the beach.

Also helping out Monday were NOAA Fisheries of New England and the Mid-Atlantic, the International Fund for Animal Welfare, New England Aquarium and the rescue’s consulting veterinarian, Dr. Stephanie Andruskevich.

Anyone who thinks they may have spotted this animal is asked to give it at least 200 feet of space and immediately call the SSC Marine Mammal Rescue hotline at 603-997-9448.

More about the pygmy sperm whale can be found at www.fisheries.noaa.gov/species/pygmy-sperm-whale.

For updates from the rescue, visit www.facebook.com/SSCmarinemammalrescue.

Staff reporter Heather Alterisio can be reached via email at halterisio@newburyportnews.com or by phone at 978-961-3149. Follow her on Twitter @HeathAlt.

Staff reporter Heather Alterisio can be reached via email at halterisio@newburyportnews.com or by phone at 978-961-3149. Follow her on Twitter @HeathAlt.

Effingham - After a lifelong ...

Effingham - After a lifelong battle with muscular dystrophy and heart complications, Joshua passed away peacefully at home with his family. Joshua was an avid fisherman and enjoyed fishing with his family and friends in Southern NH. He also loved all cars and could tell you about any one of …