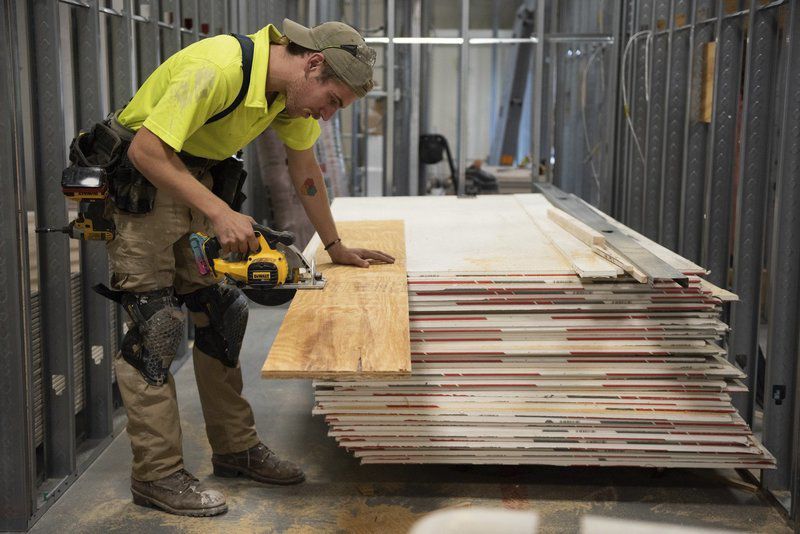 RYAN MCBRIDE/Staff photosJoe Thissell of Marino Construction saws a piece of wood Friday as he works on the new dispensary being built at Middleton Jail. 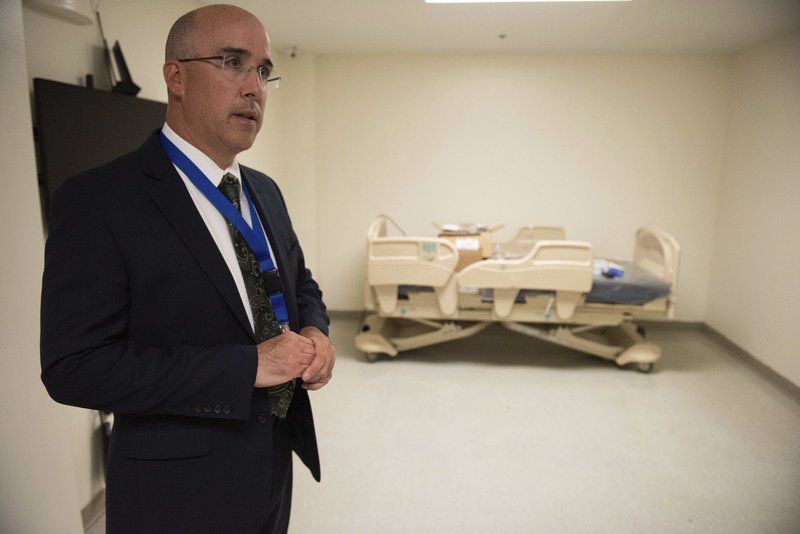 Essex County Sheriff’s Department Assistant Superintendent Jason Faro talks about the observation room designed to eliminate the possibility of inmates taking medication with them and distributing to others.

RYAN MCBRIDE/Staff photosJoe Thissell of Marino Construction saws a piece of wood Friday as he works on the new dispensary being built at Middleton Jail.

Essex County Sheriff’s Department Assistant Superintendent Jason Faro talks about the observation room designed to eliminate the possibility of inmates taking medication with them and distributing to others.

New inmates who arrive with a prescription will begin receiving one of the three drugs, while current inmates will be assessed and offered the medications 60 days before they are released, Essex County Sheriff Kevin Coppinger said.

The medically assisted treatments are being offered under a pilot program that was established by state law in 2018 and is scheduled to begin on Sunday, Sept. 1. Six other county jails are in the pilot program along with Essex County.

A new, $600,000 dispensary is under construction at Middleton Jail and is expected to be operational around the first of November, Coppinger said. In the meantime, the medications will be dispensed from a temporary location inside the jail starting Sunday.

The medications will also be available at the department’s pre-release centers in Lawrence and Salisbury. Officials estimated that 30-35% of the department’s inmate population of 1,450 has a possible opiate-use disorder.

Coppinger described the program as “ground-breaking,” saying it marks the beginning of a new role for jails in the fight against the opioid crisis.

“Jails today are the treatment centers for addiction as well as mental illness,” he said. “This has totally changed the face of corrections.”

Essex County was not originally part of the program, but joined after a federal judge last November ordered Coppinger to provide methadone to a prospective inmate, saying the inmate would be “irreparably harmed” if his medication were denied.

Coppinger said he always wanted to be part of the pilot program, but acknowledged that he got a “heck of an education in a short period of time” with the lawsuit, which was filed by the American Civil Liberties Union.

“It is the right thing to do,” he said. “I’ve seen a lot of families devastated by substance abuse, particularly opioids.”

Inmates will be able to receive buprenorphine, naltrexone and methadone, which are designed to control cravings, reduce withdrawal pains and prevent overdoses. Coppinger said his biggest concern about dispensing drugs inside the jail is that they will be diverted and used illegally by other inmates to get high. Buprenorphine, which is known by the brand name Suboxone, is the No. 1 drug smuggled into jails, he said.

Essex County Sheriff’s Department Assistant Superintendent Jason Faro said the jail dispensary is being built under strict guidelines from the state as well as the federal Drug Enforcement Administration.

Inmates will be watched closely by guards, medical staff and security cameras when they take the medication, he said. An inmate who takes buprenorphine, which is in the form of a crushed pill under the tongue, will have to eat a cracker and drink water to prevent him from hiding the pill in his cheek, then sit with his hands under his legs for 10 to 15 minutes. An inmate who takes methodone, which is administered in liquid form, will have to drink water to make sure the methadone is swallowed.

The jail has been administering naltrexone, known as Vivitrol, for the last few years when inmates are released.

Coppinger said the state has provided $10 million in the state budget to pay for the medically assisted treatment programs in the county jails, including the cost of the medications. The Essex County program will be administered by two private medical companies, who will provide doctors, nurses and mental health practitioners.

Brianna Messina, health service administrator for Wellpath, one the companies contracted to help administer the program, said it’s important that inmates have the option of three different medications.

“It’s what works best for them,” she said. “I think this is the absolute best way to support them in order to enter back into the community.”

Coppinger and Faro cautioned that the opioid medications are only part of the solution. Inmates receive individual and group counseling and are connected with services when they are released.

There are also existing programs for life skills, parenting and other educational classes. Coppinger said the jail will continue its detox program.

Staff writer Paul Leighton can be reached at 978-338-2675 or pleighton@gloucestertimes.com.

Newburyport, MA - Christine P. (Rudzinski) Demski, age 70, of Newburyport, died February 15, 2020, at Anna Jaques Hospital in Newburyport after a courageous battle with pancreatic cancer. Born in Bayonne, New Jersey, June 5, 1949, she was the daughter of the late Harriet (Jancewicz) Rudzinsk…