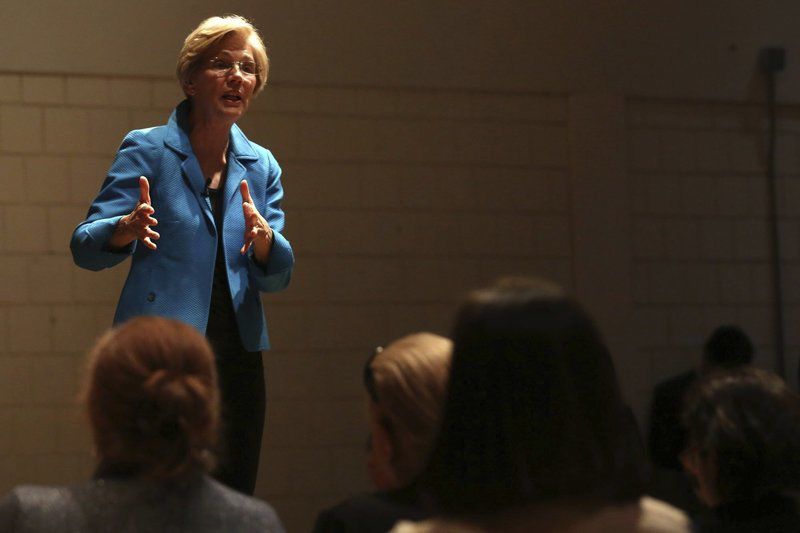 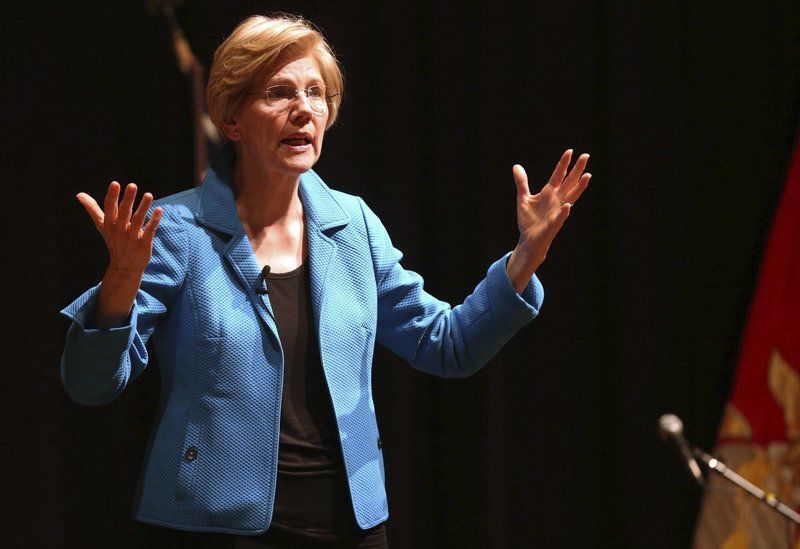 HADLEY GREEN/Staff photoU.S. Sen. Elizabeth Warren hosted a town hall meeting at Salem High School on Thursday. Warren fielded questions from the crowd and talked about a wide range of issues, including health care, education and the Trump administration.

HADLEY GREEN/Staff photoU.S. Sen. Elizabeth Warren hosted a town hall meeting at Salem High School on Thursday. Warren fielded questions from the crowd and talked about a wide range of issues, including health care, education and the Trump administration.

SALEM — Sen. Elizabeth Warren blasted President Donald Trump on Thursday night for his pledge to crack down on cities that are defying federal authorities by refusing to turn over illegal immigrants, calling the move “unconstitutional.”

“The Supreme Court has made it clear that the president does not have the authority to withhold federal funds in order to punish ... cities and states,” the Democrat told reporters after a town hall meeting at Salem High School.

“Donald Trump can make all the threats he wants but I don’t believe the courts are going to back him up,” she said.

Both Salem and Lawrence have declared themselves sanctuaries, which means police there will not hold immigrants suspected of illegally living in the United States for federal authorities.

The Trump administration is pressing lawmakers to include language in the budget to restrict federal funding for cities that do not enforce federal immigration policies.

With Congress in recess, lawmakers are returning to their home districts to face angry constituents packing town hall meetings with concerns about efforts to repeal and replace the federal Affordable Care Act, as well as other contentious issues.

Warren faced mostly friendly questions on familiar themes Thursday night and was praised by many of the estimated 500 people who packed the high school auditorium.

She blasted the Republican plan to overhaul health care, saying it will drive up insurance costs for millions of middle-class families while providing tax breaks for the wealthy.

She criticized Trump’s pledge to reform the tax code, suggesting it would benefit the wealthy and not the middle and working classes.

“The lobbyists are out there in full force, paid for by those who want to see tax policies that allow them to keep more of their money,” Warren said.

Rebecca Green, 32, of Beverly waited more than a hour to get into the event. She thinks Warren is doing a good job and should run for president in 2020.

“I’m terrified about what four years of Donald Trump will do to civil liberties, the environment and health care in this country,” she said.

John West, 41, of Salem said he is worried about cuts to education and the high cost of college tuition. He said Warren is “one of the few lawmakers focusing on those issues.”

“She’s not beholden to the banks like most of the politicians in Washington seem to be,” he said. “She’s sticks up for average people.”

Warren, who is up for re-election in 2018, has become a prominent face of the so-called “resistance” to Trump and a federal government controlled entirely by Republicans.

She has taken on Trump’s pledges to deport immigrants, rollback clean energy laws and environmental regulations, and repeal the health care law.

“Donald Trump has assembled the biggest group of billionaires that Washington has ever seen,” she said in Salem. “They don’t care about working families.”

The tough talk against Trump has helped her amass a sizable campaign war chest.

Warren collected about $5.2 million in the first quarter of the year to bring her campaign account to more than $9.2 million, according to Federal Election Commission filings.

Nearly all of her latest contributions came from individual supporters, with just $34,000 from political action committees and other groups, according to her campaign.

But a recent poll shows her support in the Bay state has slipped since the election.

She could be facing several GOP challengers in 2018, including state Rep. Geoff Diehl, R-Whitman, a conservative who helped run Trump’s Massachusetts campaign.

Erin O’Brien, an associate professor and chairwoman of the political science department at the University of Massachusetts at Boston, said despite Warren’s recent drop in the polls, she remains widely popular in the Bay State, especially among liberal Democrats.

“She is absolutely beloved by the Democratic base in Massachusetts,” O’Brien said. “The polls really don’t pick up on the passion of her supporters.”

Christian M. Wade covers the Massachusetts Statehouse for North of Boston Media Group’s newspapers and websites. Email him at cwade@cnhi.com.