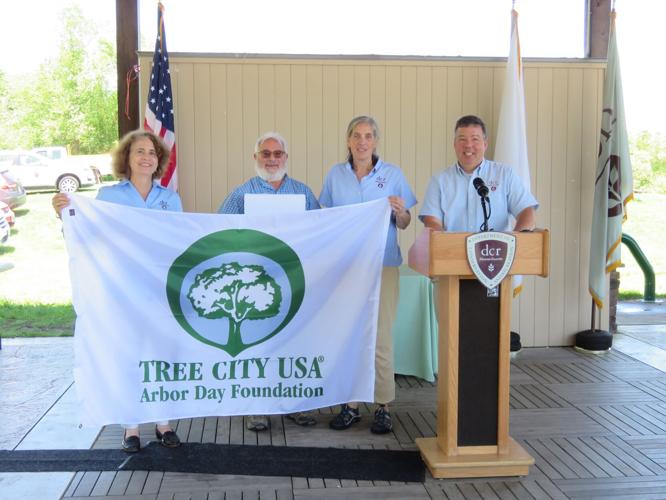 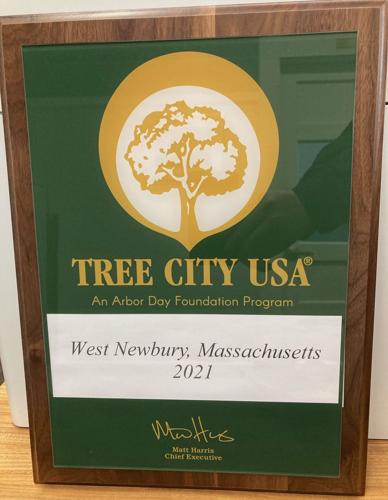 West Newbury has been named a Tree City by Tree City USA.

West Newbury has been named a Tree City by Tree City USA.

WEST NEWBURY — It’s official. The town is among roughly a quarter of the communities in Massachusetts to be recognized as a Tree City by Tree City USA — and it has the merch to prove it.

Tree Committee Chair Fred Chanania represented the town at a ceremony June 8 in Acton at which West Newbury joined the ranks of 3,200 communities across the nation to receive the designation.

The ceremony was hosted by the Massachusetts Department of Conservation and Recreation’s Urban and Community Forestry Program.

Chanania learned that the state has the most Tree City communities in New England — with 86 out of 351 towns and cities earning the status. West Newbury was the only community to receive recognition in 2021, which Chanania felt was an honor worth letting residents and visitors know about.

He presented town officials with a large wooden plaque that he suggested be hung at the town offices.

Chanania proposed that two metal 30-inch-by-24-inch signs stating “Tree City USA” be displayed at the town border at either end of Route 113. A large flag was also part of the gift package Chanania received at the ceremony.

The town’s Tree Committee is investigating a possible tree planting grant to purchase trees that could help to counter the recent loss of ash trees due to emerald ash borers.

A variety of native species could be planted behind Page Elementary School next spring to provide shade. The panel is also working to create a 26 species public tree trail with identifying markers in a section of the Mill Pond Recreation Area.

The committee would need an assist from the Public Works Department to plant the trees, Chanania said. He stressed that West Newbury has been blessed with an abundance of tree cover and his committee is dedicated to its preservation.

The Tree Committee was established in August 2019. To learn more, visit www.wnewbury.org/tree-committee.