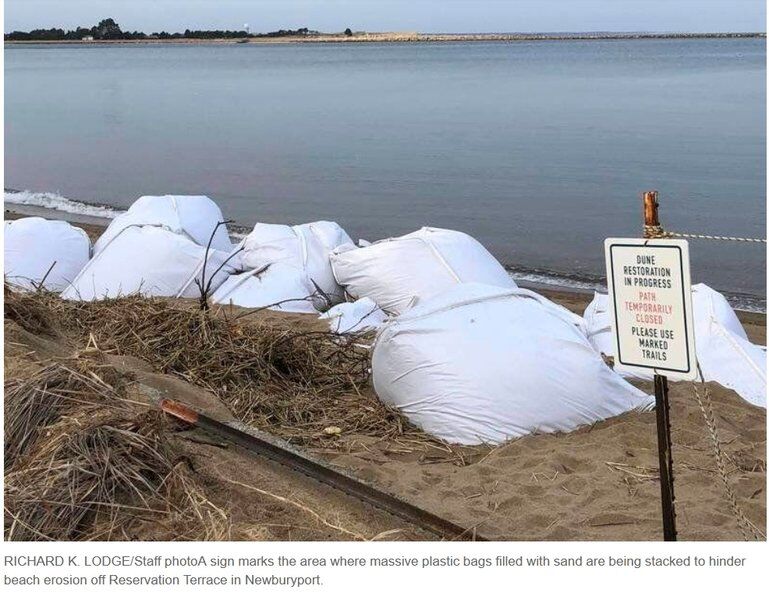 RICHARD K. LODGE/Staff file photoSome of the 150 “super sacks” — white plastic bags of sand — were placed on the beach at Plum Island in late January and early February, before storms tore them apart. 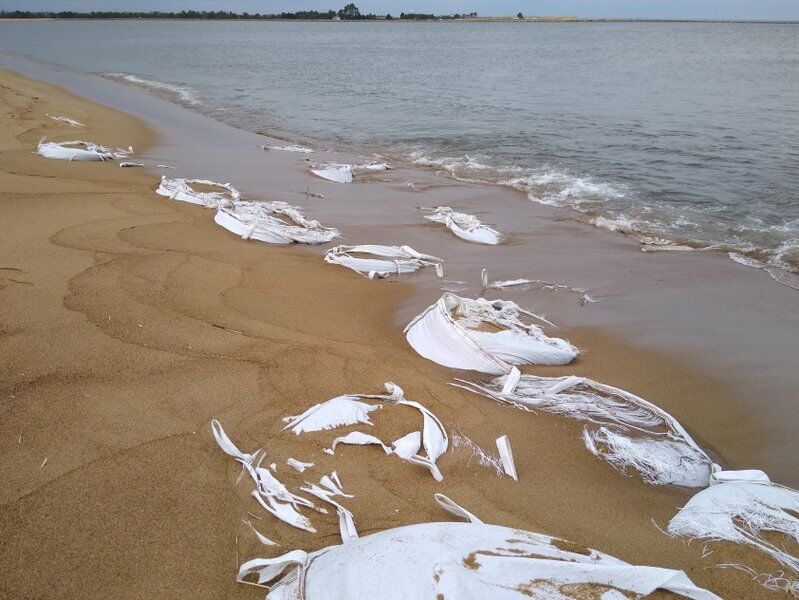 RICHARD K. LODGE/Staff file photoSome of the 150 “super sacks” — white plastic bags of sand — were placed on the beach at Plum Island in late January and early February, before storms tore them apart.

A Daily News headline story on April 13 praised a 12-year-old local girl for securing a $200 grant to organize a team of young volunteers to clean up plastic from our beaches.

One of their likely targets: the shredding plastic now entering the ocean and river from plastic sand bags placed along the shore as part of a multimillion-dollar project. Have you visited the beach below Reservation Terrace in Newburyport to see this atrocity?

Huge amounts of white plastic disintegrating to pollute the water and kill sea life, with apparently none of the federal, state, and local authorities who lauded or approved the plastic plan taking any steps to correct the problem they caused?

I guess they knew some 12-year-olds would come along and clean up their mess for them.

Let me be clear: I am not arguing against a plan to restore beach sand in that area to protect homes and the beach for public use. I am against what seems an obvious shortsightedness among those who initiated, authorized and carried out the plan without including provisions to clean up the mess when the plan failed.

Mayor Donna Holaday, who seems to have played a key role in the plastic plan, is quoted in the Feb. 5 story about the plastic bag damage: “The tide was ferocious when it came in. How do you fight Mother Nature like this?”

Well duh! And as you watched nature starting to shred all that plastic into the ocean (where every 12-year-old knows it breaks up into smaller plastic pieces that do great damage to the local and ocean ecosystems), it never occurred to you to send a crew back in there to clean up the mess? And it still hasn’t?

If you want to know all the parties involved in the overall beach plan, go back to The Daily News Jan. 21 story. H

And to be fair, maybe in an emergency that was the best they could do, like putting a million Band-Aids on a wound – without thinking that inevitably the Band-Aids come off.

I just can’t believe it. No one with authority thought about putting plastic in the ocean? How could you miss it, then or now? You can see it from a half mile away. It’s like a big DPW truck full of plastic drove onto the beach and just dumped it.

To be fair, I acknowledge a later Daily News story of March 15, saying, “Local, state and federal officials are considering the use of … coir bags, which are environmentally friendly unlike plastic bags.”

Ah! At least this is a tacit admission of the screwup with the plastic bags. So wouldn’t you think that having admitted this, they would take some steps to prevent further disintegration of that plastic into the water?

You’d think wrong. The plastic is still there. Still breaking up in the waves. Still wreaking havoc on sea life. Thank God some sixth-graders are taking matters into their own hands.