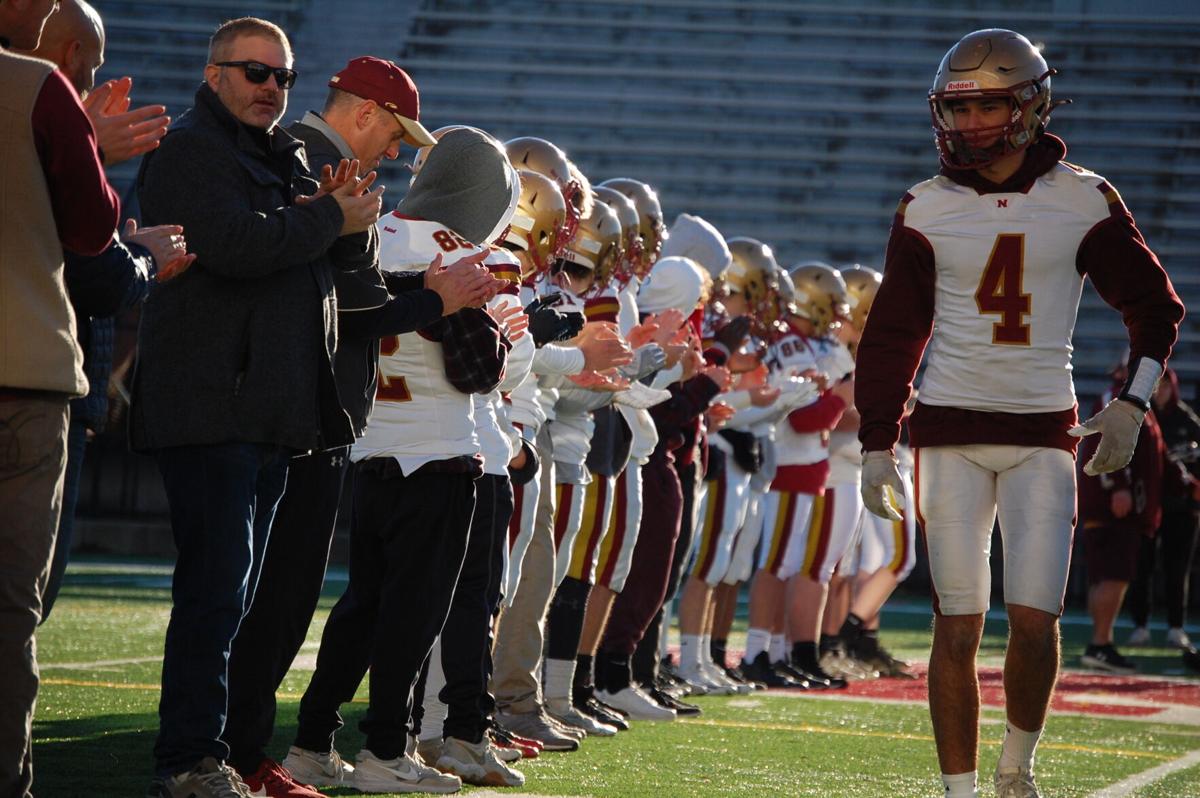 Evan Landry (4) walks down the tunnel that alumni and current underclassmen form to congratulate the seniors after their final practice on Wednesday. 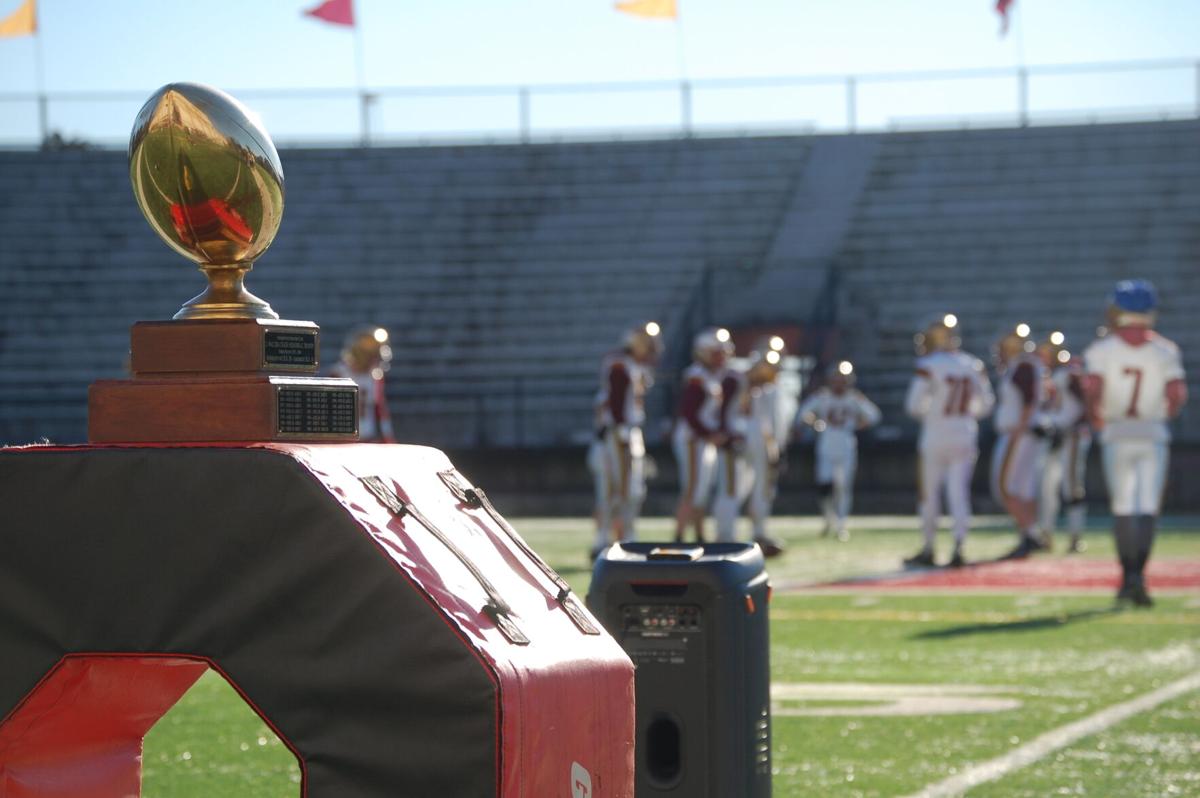 The J. Walter Chase Trophy at Newburyport’s final practice of the season as the Clippers prepare for their annual Thanksgiving Day game with Amesbury. 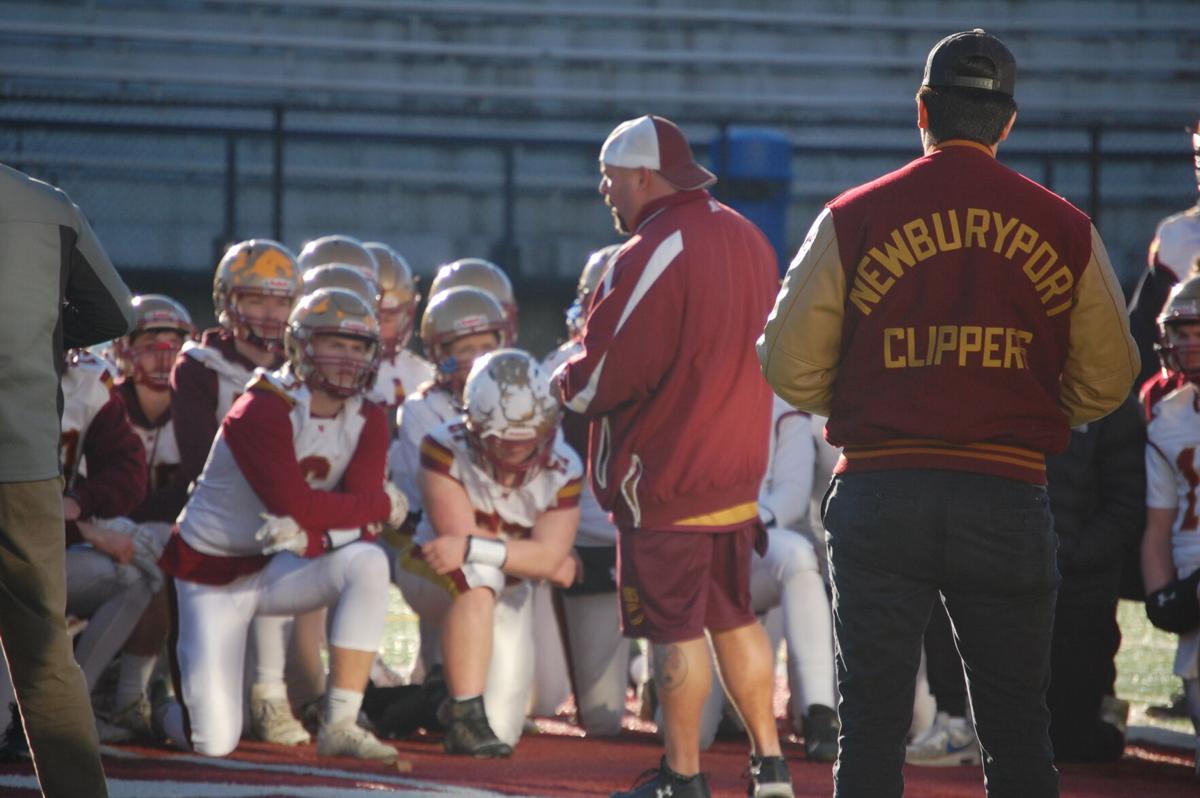 Newburyport football coach Ben Smolski talks to the team after they wrapped up their final practice of the year on Wednesday. 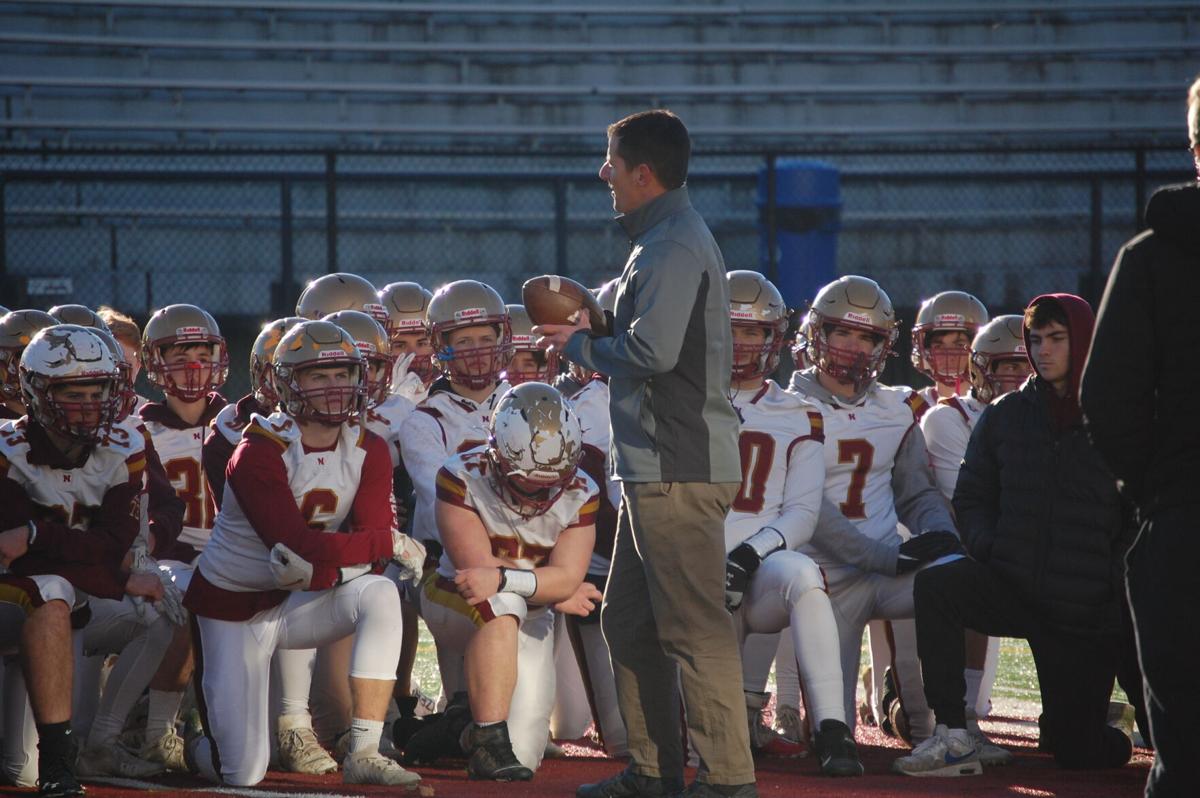 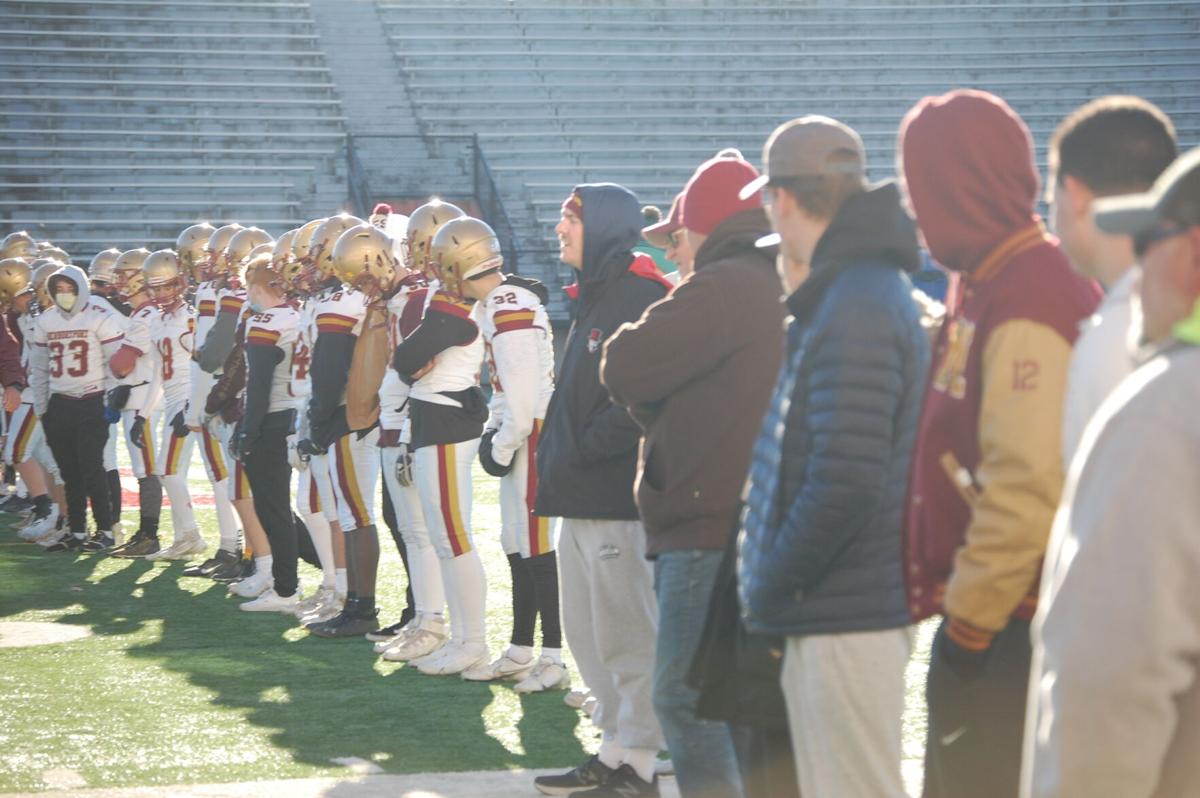 Following tradition, Newburyport football underclassmen join alumni following the team’s final practice of the season to clap for the current seniors as they finish their final practice.

Evan Landry (4) walks down the tunnel that alumni and current underclassmen form to congratulate the seniors after their final practice on Wednesday.

The J. Walter Chase Trophy at Newburyport’s final practice of the season as the Clippers prepare for their annual Thanksgiving Day game with Amesbury.

Newburyport football coach Ben Smolski talks to the team after they wrapped up their final practice of the year on Wednesday.

Following tradition, Newburyport football underclassmen join alumni following the team’s final practice of the season to clap for the current seniors as they finish their final practice.

NEWBURYPORT — As the clock hit 2 p.m. on a beautiful Wednesday afternoon, some 40 to 50 Newburyport football alumni joined with current underclassmen on the team to form a tunnel from the middle of James T. Stehlin Field to the passageway to the locker room.

One by one, seniors from this year’s and last year’s teams walked down the tunnel to applause from Clippers past and preset.

For decades now, it’s been a way to celebrate the seniors for finishing their final high school practice.

“It’s like a welcome to the alumni family,” said Newburyport coach Ben Smolski.

It’s that and so much more. It’s tradition.

It’s one of the many pre-Thanksgiving Day staples that Newburyport and Amesbury didn’t get a year ago when their annual holiday rivalry game – which dates back to 1891 – was canceled due to the pandemic.

To put it simply, it was a devastating blow to two neighboring communities that have one of the richest holiday rivalries in the entire state.

“Right before we go into the locker room, there’s a big board we see that has every score of every game since 1891,” said current Newburyport senior quarterback Finn Sullivan. “Freshman year, we lost 8-0 and I didn’t even play in the game and I was still so devastated.

“So yeah, not having it last year was definitely tough. I remember playing in my sophomore game. It was huge, and the entire place was packed. You would see people from 30 or 40 years ago come to the game, so it was really unfortunate to not have that for the community last year.

“At the end of the day, we’re playing for the guys who wore these Newburyport jerseys and laid the groundwork before us.”

But that history doesn’t go away, even if “the game” had to take a year off.

This morning, Newburyport and Amesbury will meet again for the 98th time on Thanksgiving Day as the teams will be ready to kick off from Landry Memorial Stadium at 10 a.m. to fight for the coveted J. Walter Chase trophy. It’s a game that means so much more to two communities than any other they will play all year.

“Thanksgiving Day is about the three F’s, and I’ll go in order of importance: family, football and food,” Smolski said. “Having one of those three F’s pulled away, it was heart-wrenching. It’s been a tough go at it for the last almost two years with the pandemic, and just to have those things taken away makes you not take them for granted.

“So just to have it back and to be playing tomorrow is great.”

The last time the two teams missed playing a Thanksgiving Day game prior to last year was 1930. Heading into Thursday’s 98th annual game, Newburyport holds a 52-39-6 edge in the all-time series and won the 2019 game 34-20.

But both teams are just thankful for the relative normalcy, and the buzz in the air surrounding this year’s contest.

Newburyport “clapped” their new alumni into the family after Wednesday’s final practice, and, since they didn’t get to do it last year, Smolski invited seniors from last year’s team, including Trevor Ward, John Donovan, Charlie Cahalane, Jacob Buontempo and many others to get their moment to celebrate a Clipper tradition that started with the legendary Coach Stehlin all those years ago.

When it comes time for the game on Thursday, Newburyport (4-6) will be the underdog against an Amesbury (7-2) team looking to clinch the Cape Ann League title with a win.

“We’re definitely fired up,” said Sullivan, a dual-threat option who has 1,438 passing yards, 612 rushing yards, 23 TDs and 22 extra points made this fall. “(Amesbury) has had a great season, but at the end of the day, the records are thrown out of the door.”

He was making his third career start as a sophomore during the 2019 game, and sparked a big Clipper comeback when he hit Walker Bartkiewicz for a pair of touchdowns with his team trailing 14-0 at one point. He finished the day with 134 passing yards in what could be considered his “breaking out party.”

Now, Sullivan is the program’s all-time leading rusher for a QB.

“That was something that I’ll never forget for the rest of my life,” Sullivan said of the 2019 game. “Not many people get to experience that.”

But Amesbury is, of course, going to come ready.

Running backs Henry O’Neill, Nick Marden, Shea Cucinotta and Luke Arsenault will join senior quarterback Drew MacDonald in trying to lead the Indians to a win and a CAL title.

Will the Newburyport defense, led by linebackers Jack Hadden and Jack Sullivan, be able to stop Amesbury’s potent running attack?

But what fans in both cities know is that Newburyport-Amesbury Thanksgiving football is back, and that’s reason enough to celebrate.

“There’s nothing like Newburyport and Amesbury,” Smolski said. “It’s my favorite holiday of the year.”