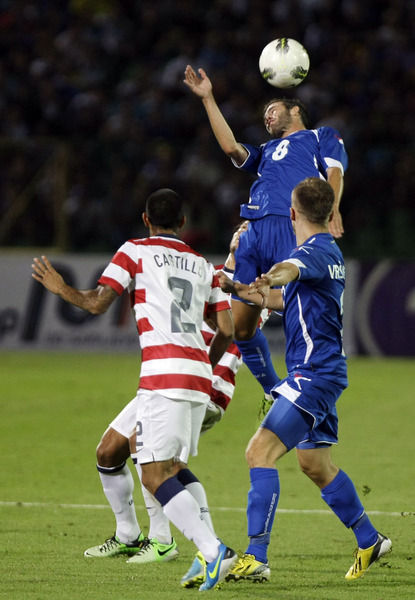 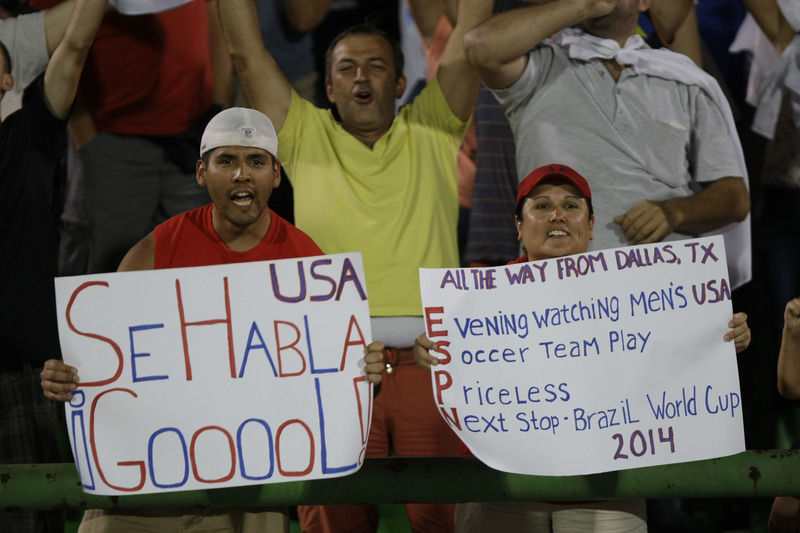 Supporters of the USA team cheer during the soccer match against Bosnia in Sarajevo.

Supporters of the USA team cheer during the soccer match against Bosnia in Sarajevo.

Trailing 2-0 at halftime, their record winning streak in jeopardy, the Americans never panicked.

There was no need to, not with Jozy Altidore on their team.

Altidore led an impressive comeback yesterday, scoring a hat trick and adding an assist on the other goal as the U.S. rallied to beat Bosnia-Herzegovina 4-3 in an exhibition in Sarajevo and extend its record winning streak to 12 games. It was the first come-from-behind win on European soil for the Americans.

“We came in (at halftime) and said, ‘Listen we can beat this team,’” said Altidore, who has scored in five straight games, a first for a U.S. player. “We came in and said, ‘We have more weapons, we’re just as confident as they are. We just have to put more passes together and be more confident.’ And you saw that in the second half.”

The 12-game winning streak is the longest in the world right now, and three shy of the record set by Spain in 2009. The win over 13th-ranked Bosnia was the second over a top-15 team during the run, following a 4-3 victory over No. 2 Germany on June 2 that started the streak.

Edin Dzeko scored his second goal in the 90th minute. But it wasn’t enough for the Dragons, who lost for the first time in 10 games.

“We absolutely deserved the win,” U.S. coach Jurgen Klinsmann said. “This is good for the guys to see that we’re going to come to Europe and play eye to eye. We’re not here to defend or counterbreak. We’re here to play.”

The U.S. winning streak, the longest currently in the world, appeared to be jeopardy after the Americans fell behind 2-0 before halftime.

The Bosnians quickly pounced on a Johnson turnover in the eighth minute and fed it to Dzeko. His first shot, from just inside the penalty area, deflected off Tim Howard, but Dzeko was right there to collect the rebound and put it in the net for a 1-0 lead. Vedad Ibisevic, who spent part of his childhood in St. Louis and still has immediate family there, doubled Bosnia’s lead in the 30th on a header.

But the U.S. was beginning to create chances even before the half, and Klinsmann told his players in the locker room that the game was still very much up for grabs.

“Jurgen has always said, even if we go down a goal, keep responding,” Altidore said.

Respond they did. Resoundingly.

Altidore set up Johnson’s goal in the 55th minute, controlling a long chip shot from Michael Bradley with a slight touch of his left foot. The ball fell right at Johnson’s feet and, with goalkeeper Asmir Begovic out of the net to block Altidore, Johnson neatly tapped the ball into the empty net to cut Bosnia’s lead to 2-1.

Fabian Johnson slalomed through a crowd of Bosnian defenders, chipping the ball to Altidore. He took one shot and buried a left-footed shot from 16 yards that the diving Begovic had no chance to stop. It was Altidore’s fifth goal in as many games, breaking the previous mark he’d shared with Eddie Johnson, William Looby, Eric Wynalda, Brian McBride and Landon Donovan.

He wasn’t finished, either.

The Americans were awarded a free kick in the 84th minute when Edgar Castillo was tripped by Miroslav Stevanovic. Altidore lifted the ball over the wall of Bosnians and into the back of the net. Two minutes later, he finished off his second career hat trick with a shot from about 8 yards out.

“We see a Jozy that is enjoying himself,” Klinsmann said of his striker, who has seven goals in the last five games. “He went through a lot of maturing elements over last couple of years ... But he really understands now how to zoom in when it counts. He makes everyone around him a better player. It’s real enjoyable, it’s really fun.”

The win is sure to be a boost for the Americans when they resume World Cup qualifying next month. The U.S. travels to Costa Rica on Sept. 6, then returns home to face archrival Mexico four days later in Columbus, Ohio, in a game that could secure the Americans a spot in next year’s World Cup in Brazil.

Bosnia, meanwhile, is looking to earn its first trip to the World Cup. The Dragons sit atop Europe’s Group G with a three-point lead over Greece.

“We still have to raise the bar,” Altidore said. “At this level, we can’t afford to make mistakes like that in group stages of World Cups because you can’t come back from that. We have to learn how to iron those out. But still, we take the positives away from tonight and you move forward with your head held high.”