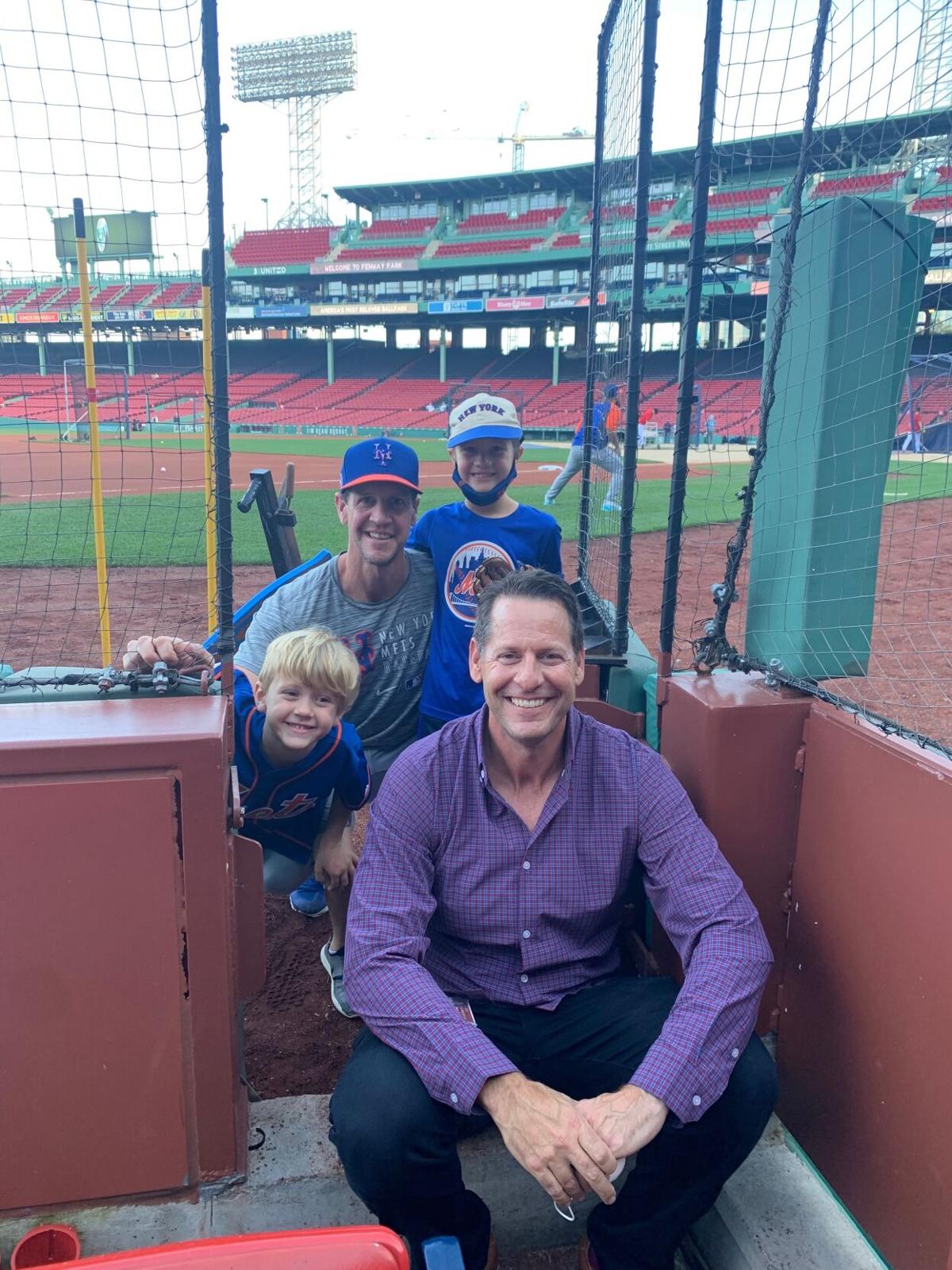 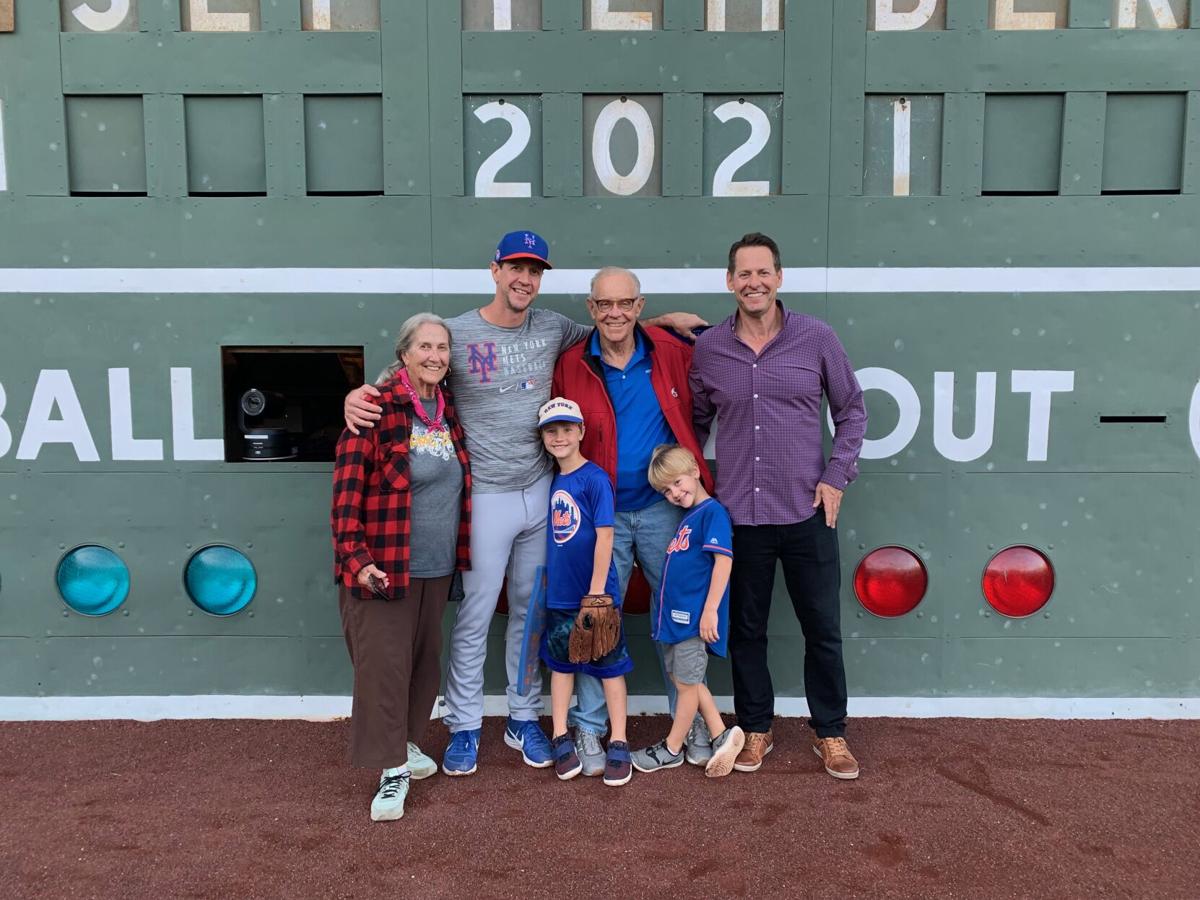 New York Mets hitting coach Hugh Quattlebaum and Red Sox vice president of scouting development and integration Gus Quattlebaum pose for a family picture in front of the Green Monster with their parents Ruth and Ed and Hugh’s two sons.

New York Mets hitting coach Hugh Quattlebaum and Red Sox vice president of scouting development and integration Gus Quattlebaum pose for a family picture in front of the Green Monster with their parents Ruth and Ed and Hugh’s two sons.

BOSTON — Gus and Hugh Quattlebaum have traveled wildly different paths since their upbringing on the campus of Phillips Andover more than two decades ago.

Gus Quattlebaum got into scouting, starting as an intern with the Montreal Expos before establishing himself with the Yankees, Orioles and eventually the Red Sox. Now in his 15th year with the organization, Gus has risen through the ranks and now serves as Boston’s vice president of scouting development and integration.

Hugh Quattlebaum continued his playing career into college and beyond. He was a standout baseball and basketball player at Amherst College and was drafted by the Detroit Tigers in the 25th round of the 2000 MLB Draft. He spent four seasons in the Tigers and Orioles systems before hanging up his spikes and settling in as a private hitting coach, and it wasn’t until 2018 that he got back into professional ball as a Seattle Mariners assistant. Now he’s serving as the New York Mets hitting coach, a role that unexpectedly fell into his lap this spring after the incumbent coach was fired a month into the season.

The two Andover natives had never crossed paths in a professional capacity, nor did they ever expect to, but that changed on Tuesday night as the Red Sox and Mets kicked off their two-game series at Fenway Park.

“If you were to tell me a couple of years ago that we’d be together at Fenway Park in this capacity I probably wouldn’t believe you,” Gus said prior to first pitch.

“We didn’t see it coming, that’s for sure,” Hugh said. “It’s all happening very fast but it’s very surreal to actually be out here. We both obviously came to a lot of games as a kid. It’s a weird feeling, I still don’t know what it’s going to feel like when the game starts.”

As the children of Phillips Andover faculty members, the Quattlebaums spent most of their upbringing living on the school campus across from one of the school’s athletic fields.

“We lived in a dorm apartment and it was like having 20 older brothers every year, some amazing people that we grew up living alongside,” Gus said. “But the facilities at the campus and our father’s love of baseball turned us on to the Red Sox, turned us on to baseball and we had great coaches coming up through Andover, like Joe Iarrabino, Dave Bettencourt, they were all huge influences on us.”

From a young age the pair loved to compete, and by the time they became Phillips students themselves they were each outstanding athletes. Gus graduated in 1993 before attending Davidson College, and Hugh followed in 1996, earning Eagle-Tribune Athlete of the Year honors as a senior before continuing his athletic career at Amherst.

Iarrabino, the longtime Andover Legion baseball coach, said the two stand out even after all these years as among the best he ever coached.

“They were tremendous competitors,” he said, adding that Gus to this day drives up from Boston to talk to his team from time to time. “They loved the game, always fought to the end, really loyal and hardworking, always wanted extra batting practice and ground balls, both of them.”

Thrown to the deep end

Now a father of two young boys, Hugh has enjoyed watching his own sons develop a love of baseball the same way he and Gus did as kids. In order to spend more time with them he took a job this spring as the Mets minor league director of hitting development, a role that would allow him to spend a good amount of time home in Atlanta with his family.

But then in May an unexpected opportunity arose after the Mets fired hitting coach Chili Davis and assistant hitting coach Tom Slater. Taking over as hitting coach meant Hugh now held one of the highest profile positions in his field, but it also meant being effectively separated from his family for the rest of the season.

Hugh acknowledged that has been difficult, but the family has found a way to make it work.

“You lose the family but you’re in a pretty unique situation where obviously at this level there’s so much going on, the level of competition is so high, you learn so much,” Hugh said. “So it’s been a huge year for me in terms of learning a lot about what works, what doesn’t work with the pressure of a big city and obviously back in the big leagues.”

That dynamic has made the family’s reunion at Fenway Park this week that much more special. Hugh’s family flew up from Atlanta and spent Monday’s off day with Gus and the rest of the group, and on Tuesday Hugh’s sons watched batting practice with their Uncle Gus from the Green Monster, collecting three home run balls in the process.

Then, before the game, the whole family took a photo together in front of the Green Monster before settling in to watch as Hugh coached from the visitor’s dugout.

“It’s so special to have these guys here,” Hugh said.

While the two like to joke and compete over everything with each other, Gus and Hugh are sincerely rooting for each other’s continued success, and Gus said Hugh’s experience as a player has helped him become an excellent hitting coach.

But as for their rival clubs’ games this week at Fenway?

“I want him to succeed, obviously, I root for the Mets for him, but these next two nights, can’t do that,” Gus said. “Maybe if they put up some offense but we win it’s a fair compromise.”