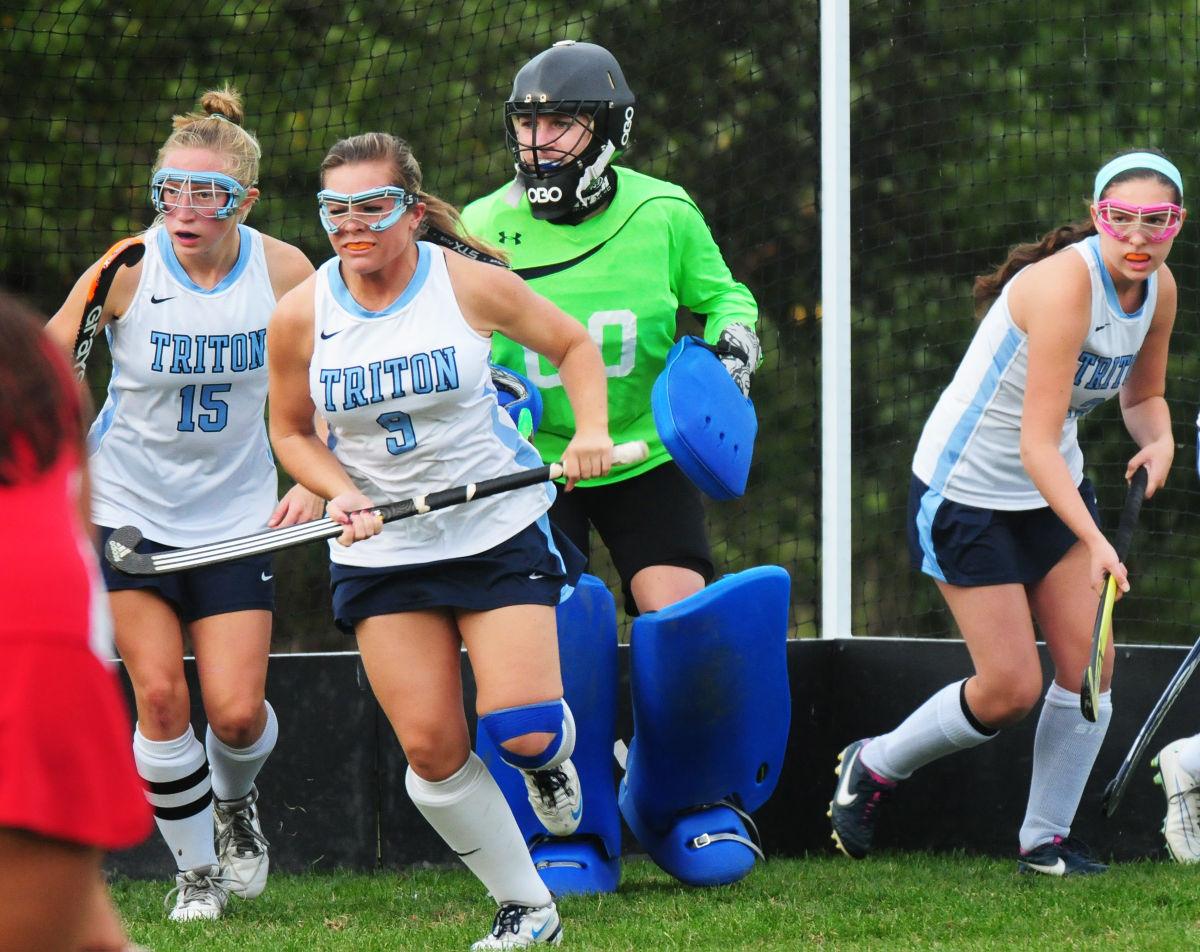 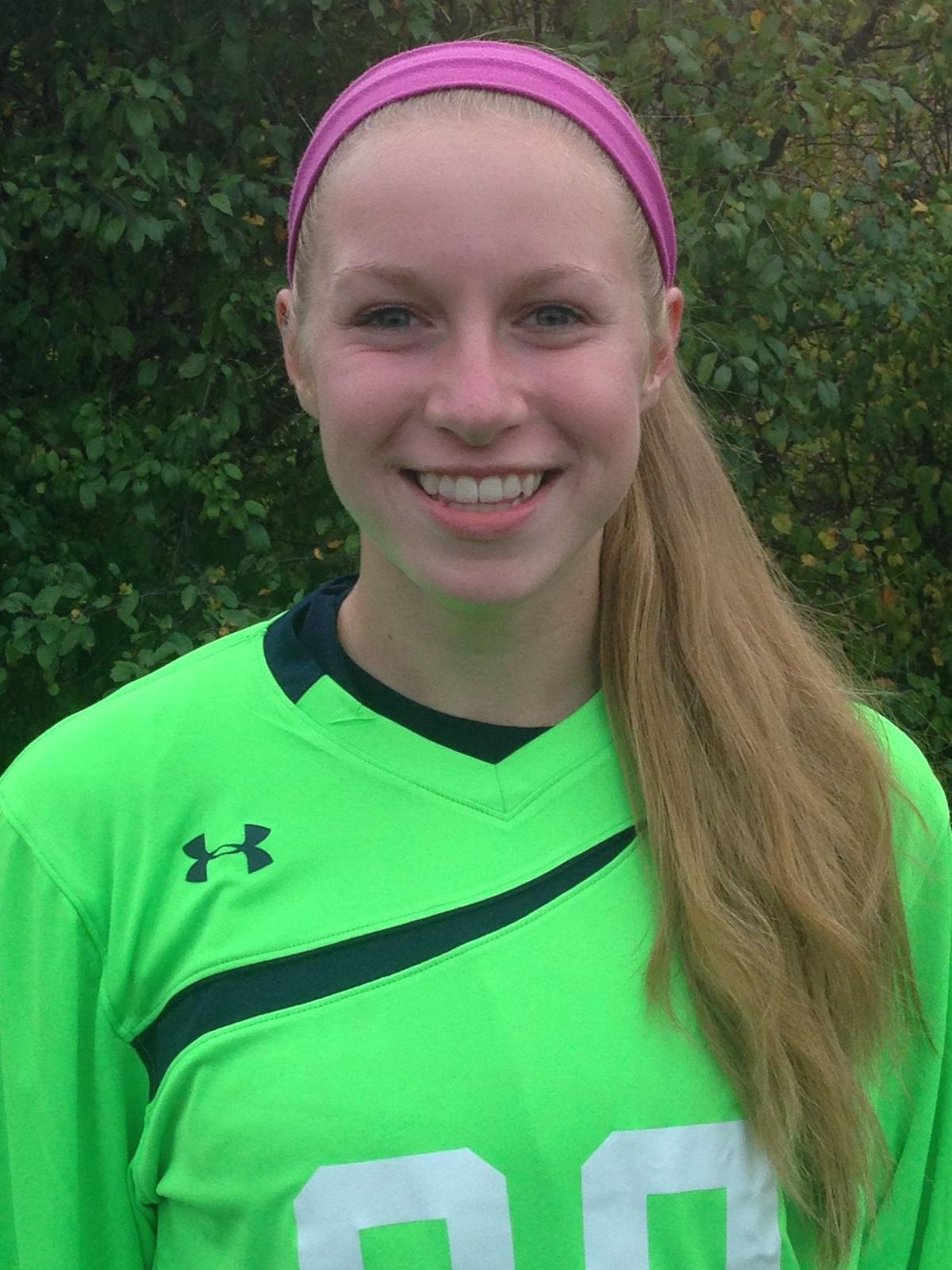 Triton’s field hockey team is hitting its stride with four consecutive shutout wins. A big part of that has been first-year goaltender Erin Savage. The 15-year-old sophomore won the spot out of preseason and has started every game for the Vikings, putting up incredible numbers along the way. In 12 games, she’s posted eight shutouts and has only allowed five goals all season. She’s only given up more than one goal once.

Beyond that, Savage is just a pure athlete; in her three sports she plays three completely different positions. In the winter, she runs the offense as the basketball team’s point guard; in the spring, she’s a midfielder for the lacrosse team. Last season, her team missed the state tournament by one point, and today the team already sits just one point away from qualifying for the tourney. We sat down with Erin to find out a little bit more about her and what makes her so great.

Daily News: What’s going so well for you?

Erin Savage: I really just have to give most of my credit to the defense because the defense really is just such a big factor of all our wins. It’s the whole team working together, but defense on my end has just been phenomenal. I love all of my teammates. I’m having so much fun this year and I think by us winning more games this year, it gives us the confidence to keep it rolling.

DN: So you on the job straight out of preseason. Talk to me about what that was like?

ES: I took it as just do the best I can. I’ve always lived by the motive that as long as I’m doing the best that I can, I can’t control anything else. So I just had the mentality of doing the best I could, so I wasn’t worried about the end results — well, yeah I was (laughs) — but I just tried to focus on whatever I could do to help the team out. I wanted to work hard and see where it got me. So I kind of just went with the flow, and when it fell into my hands I just took advantage of it.

DN: How long have you been playing field hockey?

DN: Where did field hockey come from for you? Did you just hear about it and think, ‘hey, maybe I’ll try this,’ or what?

ES: Well, this is my third sport. I play basketball and lacrosse in the other seasons. And Jess, my older sister, started playing field hockey in eighth grade. So since I didn’t have a fall sport, I was really interested from seeing Jess play and I love playing sports, so being able to pick that up in eighth grade and being more involved in high school sports now, it’s just good experience to have the everyday kind of activity.

DN: So you started as defense. How did you end up playing that position?

ES: I don’t really remember. I think because I didn’t have great stick work and I’m kind of an aggressive person I just kind of went to defense. It felt natural and made sense.

DN: So then how did the switch to goalie happen? Did you just raise your hand and say you’d help out?

ES: Yeah, in eighth grade we had a goalkeeper in eighth grade and she decided not to come back. I had been interested in playing that year, but then I heard rumors about her not coming back and thought I’d try it. So at the beginning of my freshman year the spot was open and I tried it and ended up loving it.

DN: Do you think being a defender has helped you transition?

ES: Oh yeah, definitely. By being a defender I have the experience of knowing what it’s like — just how grueling defense can be and the hustle you have to put into it. Defense is just such an important part of the team. So I have that insight. And then I have a better understanding of what they’re doing in front of me and understand them, so I can direct them more easily and it will make sense when I do.

DN: What is it about goaltending that you like? Goalies are unique in every sport and seem to have a different mindset toward the game.

ES: Well, the feeling after making a great save is just like, ‘hell yes! I just did that’ and you just feel so good about yourself. But also, it comes with the negative side of it. You do let a goal by you feel so bad, but you get to use that negative impact as motivation to just keep on working hard and stop the next ones. So I like how it’s rewarding, but at the same time you use your failure to help you keep on moving in positive directions.

DN: So you really ride that emotional roller coaster when you’re out there then with the highs and the lows?

DN: How do you deal with the mental aspect?

ES: Like I said before, I just do my best. So if I do make that mistake I just tell myself to shake it off because you can’t change it now, it’s in the past. But you can affect what happens in the future. So obviously I’m upset with all my mistakes, but I use that to be motivated to work harder on what comes next.

DN: You haven’t given up more than two goals in a game this season, and that’s only happened once. When you came into camp this preseason, if I had told you that, would you have believed that it was possible?

ES: No. I came into the season a little nervous because it was such a big role on the team. But once I started with the defense by my side, I knew we had something good on our team. The teamwork and just working hard is what’s allowed us to know that this is possible. So now that I know it’s possible to only give up two goals in a game — which is still not good, the ultimate goal is not to let up any — knowing it’s possible you just know you can so that’s what you aim for the entire time and for the rest of the season. And even though two goals may not seem like a lot, you always work to do better. So the ultimate goal is not to let any more in.

DN: How cool is it to get a shutout? And then four in a row?

ES: Yeah, like for example today [Tuesday] I was in the net and it was 3-0 and I was like ‘all right, one more minute, making my way to a shutout,’ but then I stopped myself, because I have to remember I can’t say that — there’s still a full minute left in that game and anything can happen. I just have to keep my head in the game the entire time.

DN: You’re one point away from the playoffs. What do you really feel like this team can do?

ES: It’s just surreal how far we’ve gotten, like how far we’ve come. So far this season has been incredible and it just shows how much offseason work we’ve put in. It’s a great team to play with, and I love my teammates.