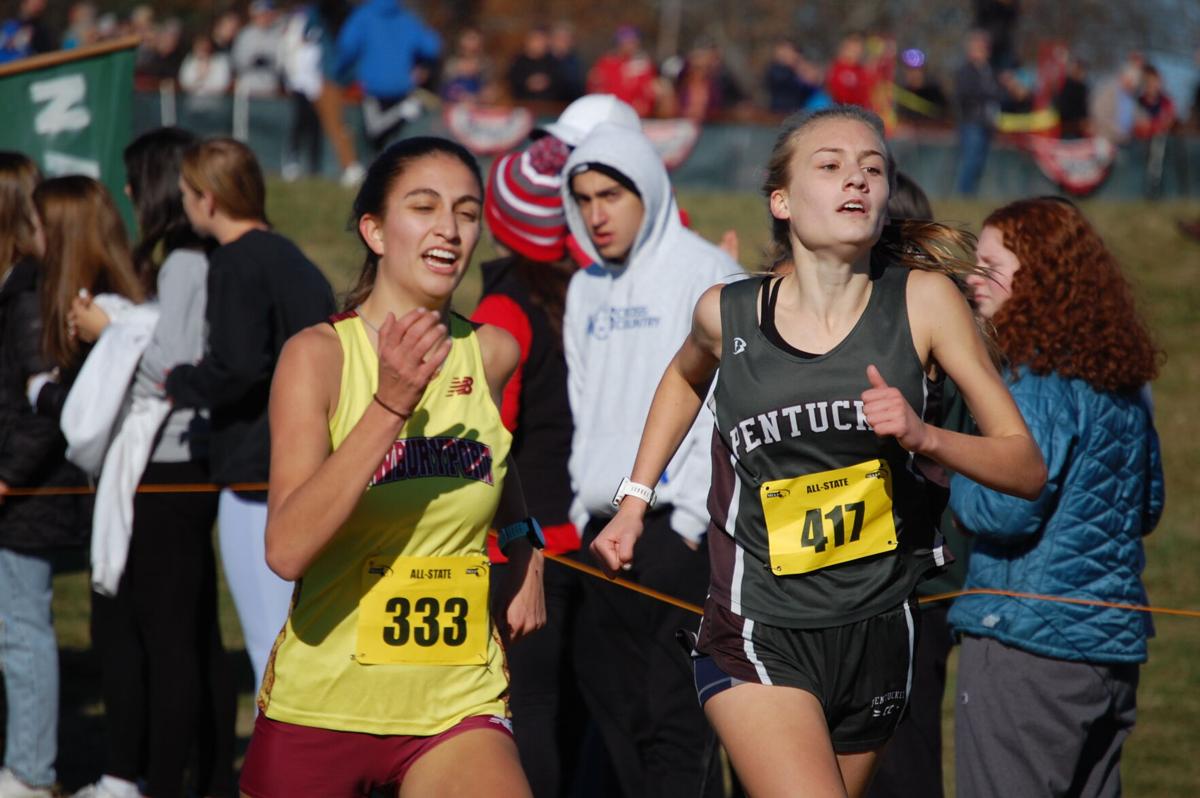 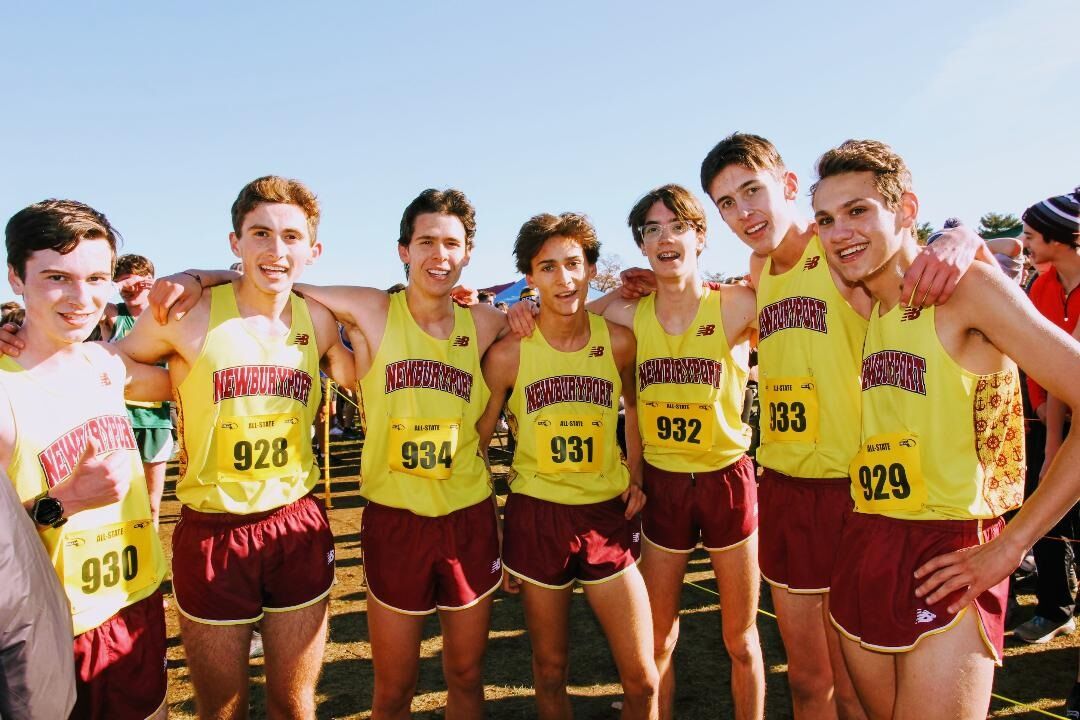 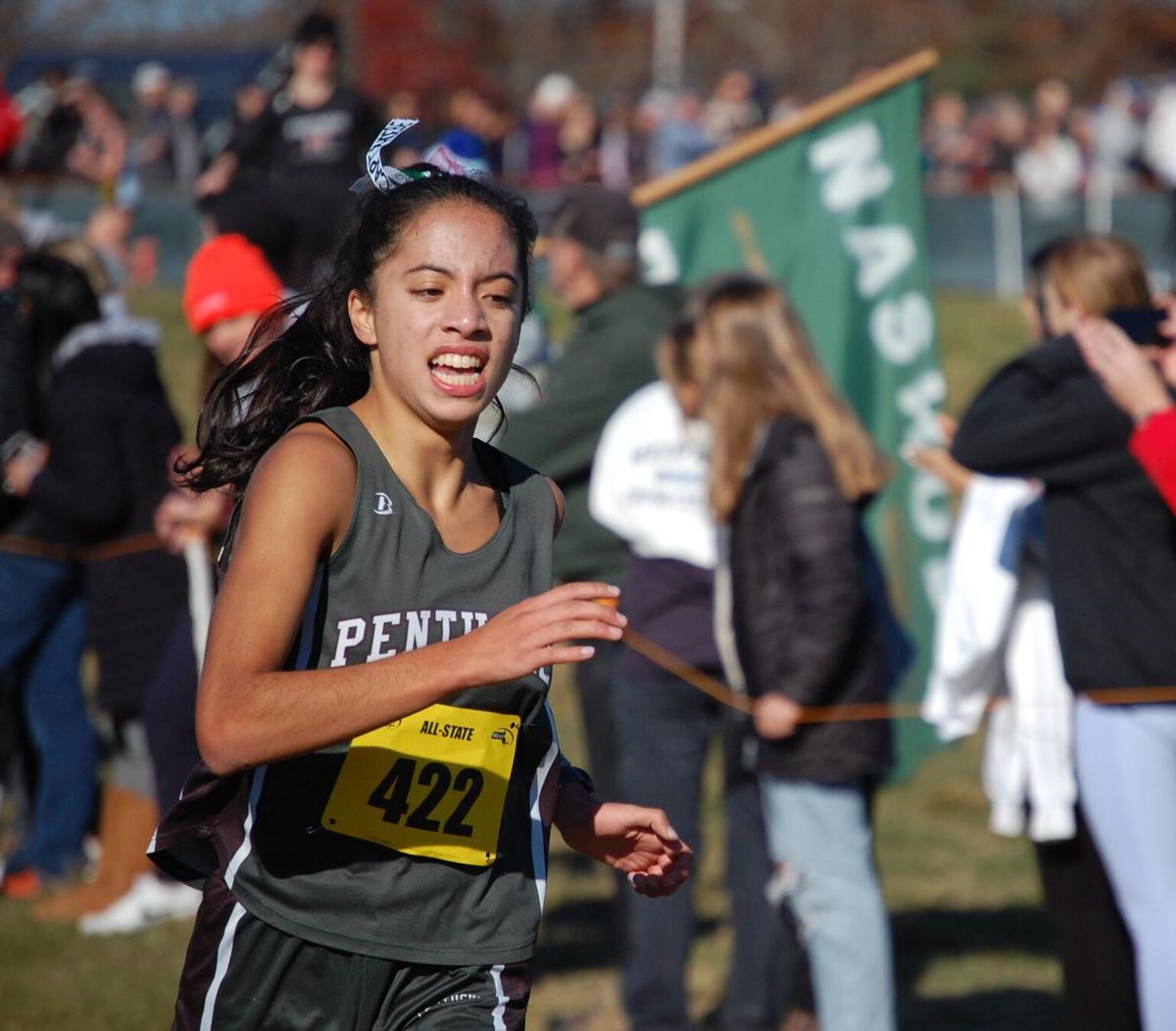 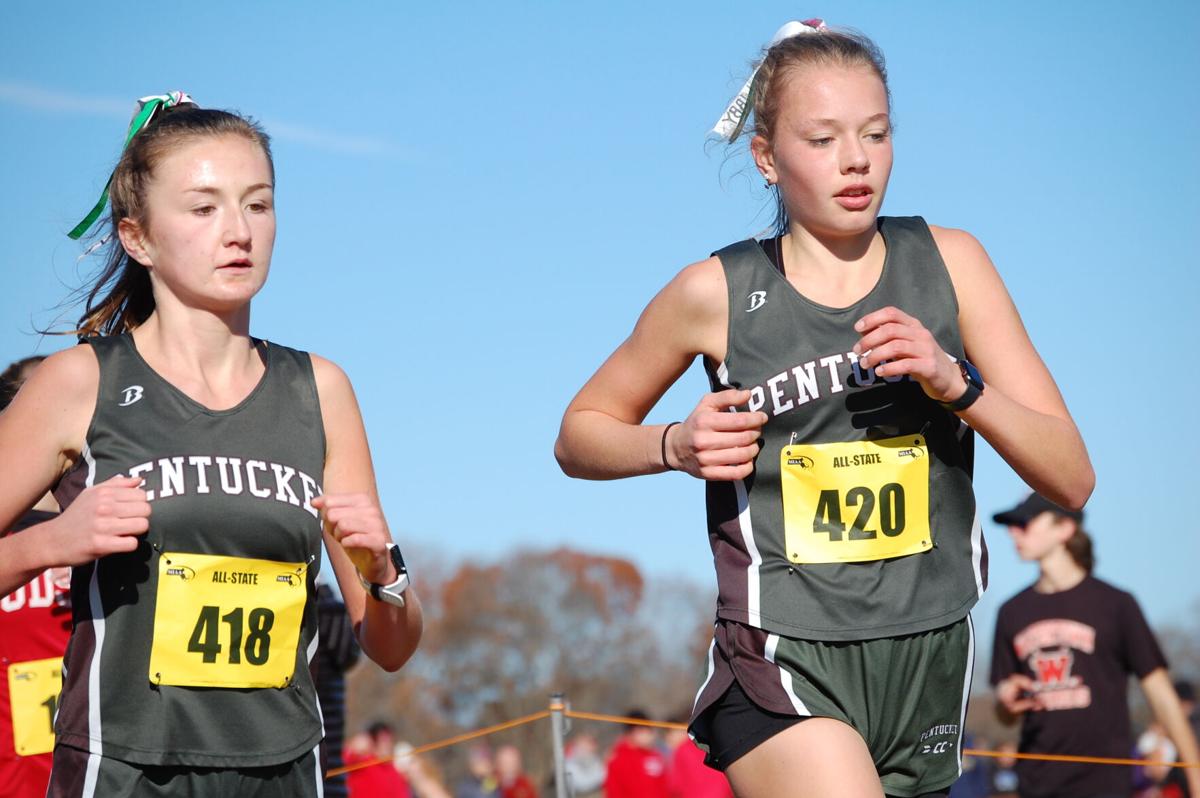 Pentucket’s Ella Edic (left) and Libby Murphy (right) started together and finished together at Saturday’s All-State meet. Both their solid finishes helped the Green and White finish in a tie for second. 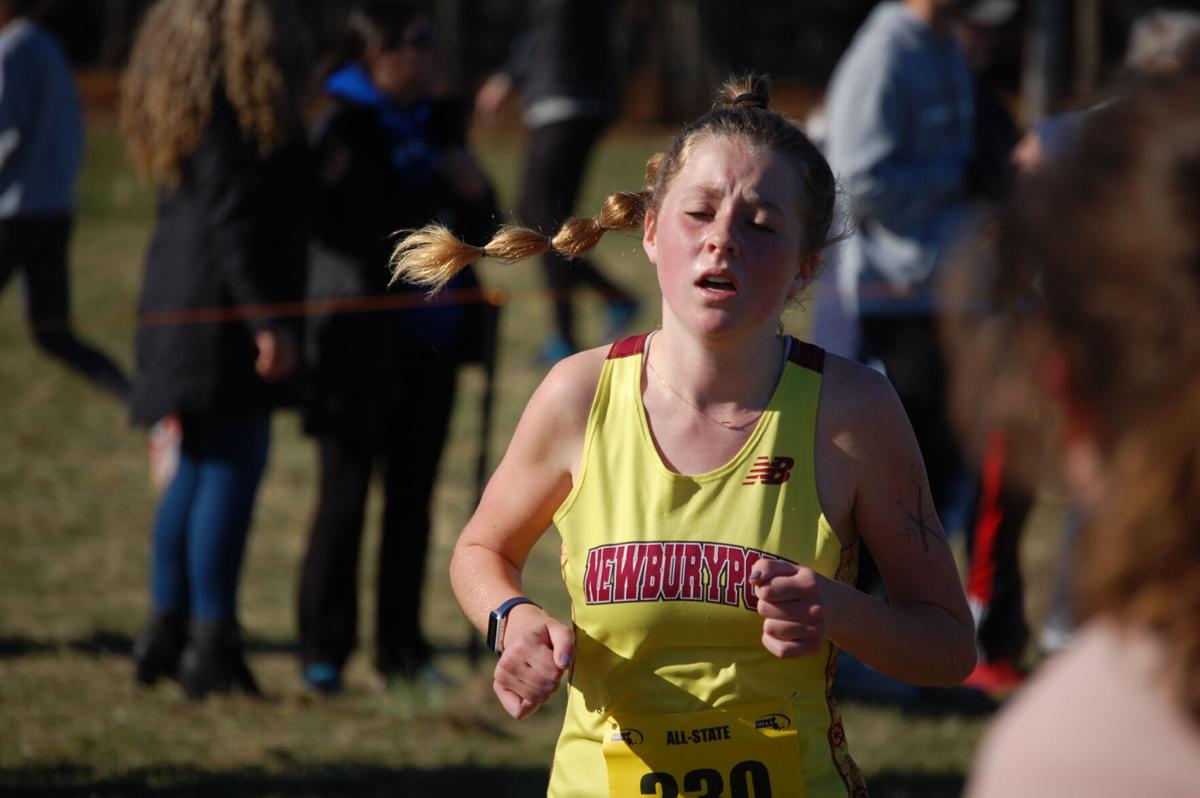 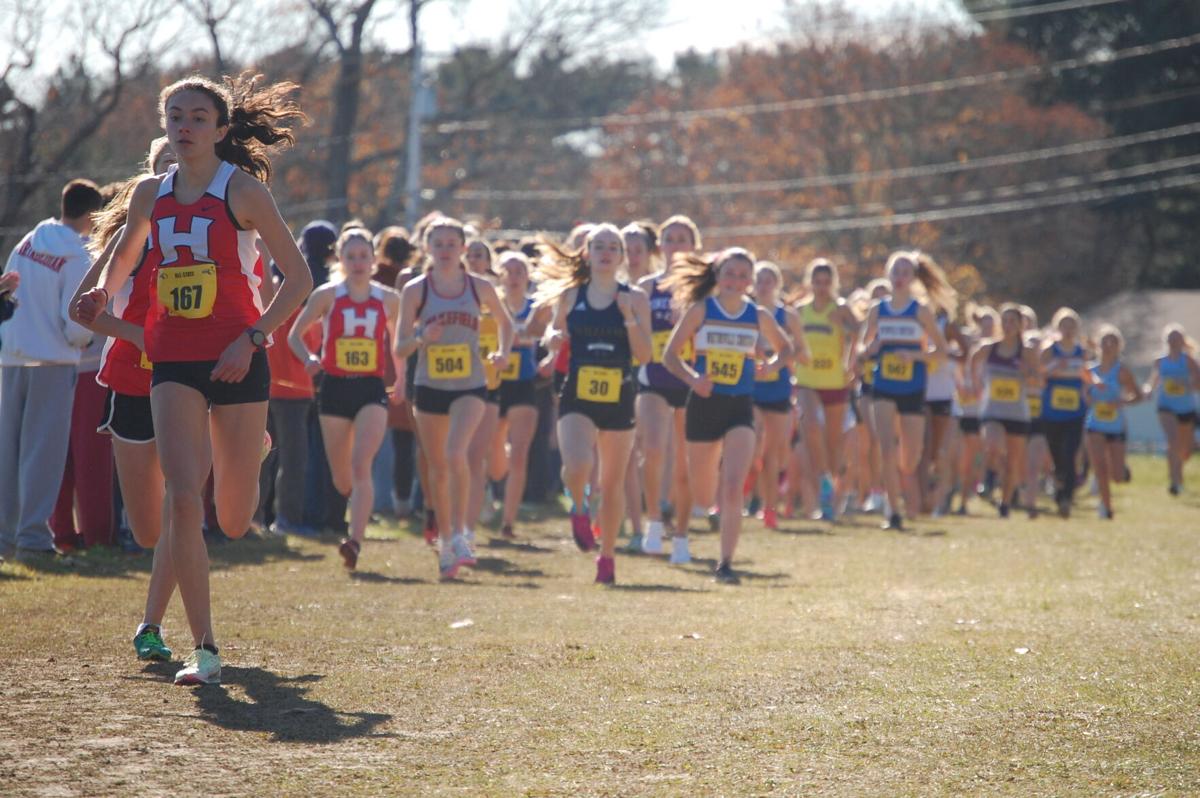 Pentucket’s Ella Edic (left) and Libby Murphy (right) started together and finished together at Saturday’s All-State meet. Both their solid finishes helped the Green and White finish in a tie for second.

WRENTHAM — It’s safe to say that the Pentucket girls cross country team picked a great time to, collectively, run its best race of the year.

At Saturday’s Division 2 All-State meet at the Wrentham Developmental Center, most of the girls in Green and White ran their best 5K times of their careers, leading them to a tie for second overall with Whitinsville Christian with 126 points. Pentucket officially finishes third after losing the tiebreaker, which Whitinsville won because its last runner who scored finished higher overall than Pentucket’s.

Powerhouse Holliston won with an incredible score of 29 points after having the first, third, seventh and eighth-place finishers.

“They ran a perfect race for them,” said Pentucket assistant coach Keith Sherman, who was filling in for head coach Todd Ruland for the day. “They had a strategy, they worked through that strategy, and it’s a big, competitive race and they did great. We’re super proud of them.”

As expected, senior superstar Phoebe Rubio was Pentucket’s first finisher in 12th overall. She finished the 3.1-mile course in 19:08.5, which was nearly 30 seconds faster than her time at last week’s Sectional meet (19:34.5). The top 15 overall finishers at Saturday’s State Meet were awarded a medal, so Rubio got some hardware to take home with her.

Pentucket will get one more chance to run together when they travel to upstate New York for next week’s Nike Nationals.

“They couldn’t have ended it in a better way,” said Sherman. “They all ran their race, a bunch of them had their best times for the season and their careers, and next week they’re going down to the Nike race in New York.”

Abigail Kelly and Annabel Murray both also finished inside the top-100 for the Clippers, who had 293 points as a team.

Newburyport boys put it together

All season long, the top-end results have been there for the Newburyport boys cross country team, but coach Don Hennigar didn’t think that his guys had put it all together, as a team, on the same day.

But that changed on Saturday at All-States.

The Clippers collectively ran their best races of the fall, sprinting to a third-place finish overall (137 points) for all of Division 2 behind just Wakefield (99) and Burlington (126).

“We’re very happy with that,” said Hennigar. “We were hoping we would be in the top-5, and it’s the best race we had all year. and it came on the right day. We finally put it all together today.”

For the second week in a row, it was senior Nathan Barry seemingly coming out of nowhere to end as Newburyport’s top finisher. After helping lead the Clippers to a win at last week’s Division 2B Sectional, Barry crossed in 16th overall (16:22.4) to set the pace for his team again.

“I was feeling pretty good,” said Barry. “We were all very excited for the race, so we had a lot of adrenaline going into it.”

After working his way back from injury at the start of the season, Barry has come on in a huge way for the Clippers over the last two weeks.

“He’s a great kid, he deserves it and he’s worked really hard,” said Hennigar. “But that’s just the way this team is. You never know on a given day who’s going to be in front for us, but the important part is we were all tight together.”

“Everyone was focused. We all wanted to pack up and run good races today,” said Carleo. “We definitely knew that we had a good team heading into the year. We didn’t specifically have a set goal at the beginning of the season, we just wanted to run good like we knew we could. and everyone’s just been improving consistently throughout the season.”