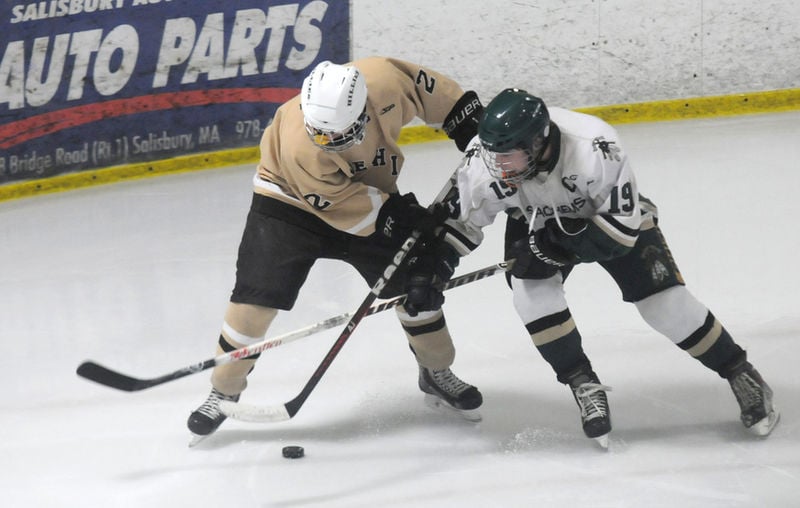 Newburyport: Pentucket's Patrick Slack fights for the puck with Haverhill's Eric Michitson during their game at the Graf Rink in Newburyport Friday night. Jim Vaiknoras/staff photo 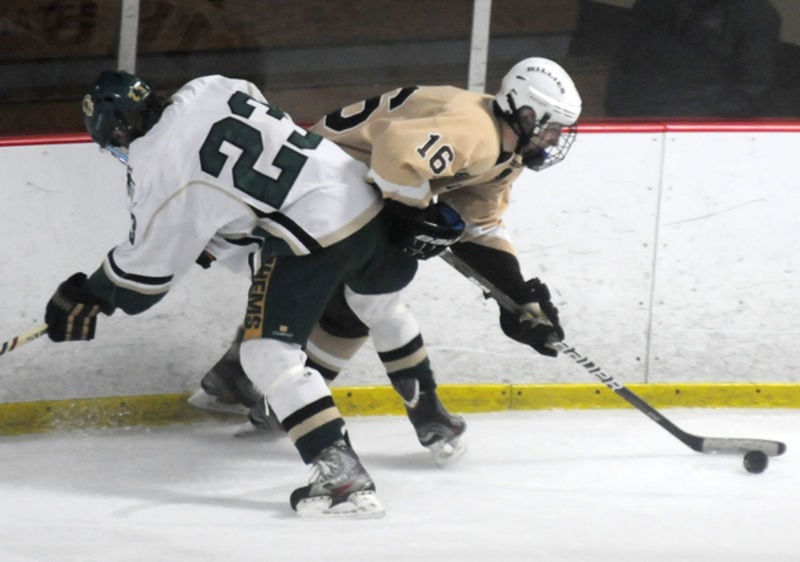 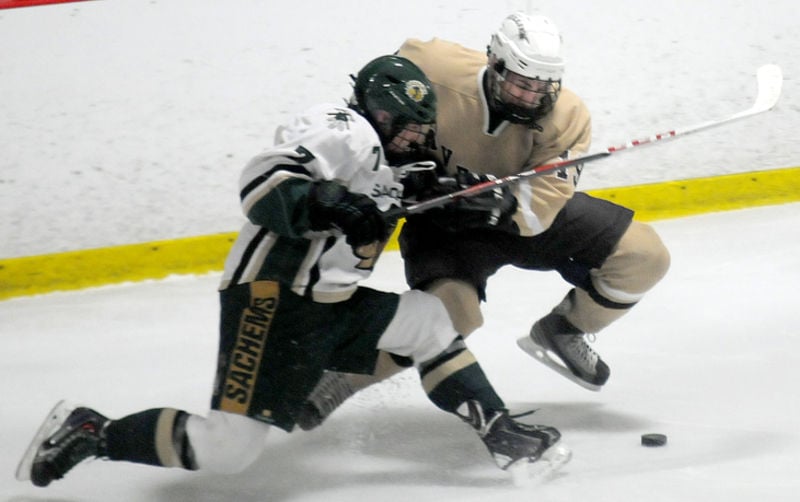 Pentucket's John Moner fights for the puck with Haverhill's Jack Gorman during their game at the Graf Rink in Newburyport Friday night.

Newburyport: Pentucket's Patrick Slack fights for the puck with Haverhill's Eric Michitson during their game at the Graf Rink in Newburyport Friday night. Jim Vaiknoras/staff photo

Pentucket's John Moner fights for the puck with Haverhill's Jack Gorman during their game at the Graf Rink in Newburyport Friday night.

Trying to play the role of spoiler, Pentucket (6-14) could have denied Haverhill (9-9-2) a state tournament berth with a win. Yet despite their best efforts, Haverhill took advantage of their opportunities late and held on to clinch a postseason berth in the team’s final regular season game.

Haverhill took a 1-0 lead early on following a goal by senior forward Tom Maguire, but the game was soon overshadowed when Pentucket senior Logan Sherwood went down with a serious knee injury late in the first period.

Sherwood was battling for the puck near the Haverhill blue line with about six minutes to play when he suddenly went down and immediately grabbed his leg. Coaches and trainers immediately attended to Sherwood, who needed to be taken out on a stretcher and sent to Anna Jaques Hospital for evaluation.

“He dislocated his kneecap, but the good news is it wasn’t an ACL or MCL tear,” Pentucket coach Bill Burns said after the game. “They’ll pop it back in, it’ll swell a little but then he’ll be okay. He’ll probably be skiing in a month.”

In a twist of cruel irony, Sherwood was called for a hooking penalty the moment he hurt his leg, so after play resumed Pentucket found itself trying to kill off a Haverhill power play.

Haverhill was unable to take advantage of the man advantage, and after the remainder of the first period concluded without incident, Pentucket tied the game early in the second when a shot by sophomore defenseman Andrew Greenbaum bounced around in front of the net and was accidentally tipped in by Haverhill junior Jon Langlois.

The second period proved to be an ugly affair, as seven penalties were called for offenses ranging from hooking to cross checking, yet despite the frequency of the power plays, neither team could take advantage.

It was actually during one of the rare instances of even strength hockey that the Hillies were able to retake the lead, as sophomore forward Kyle Gosselin took the puck across the Pentucket offensive zone and made an impressive move to get to the front of the net and score.

Gosselin’s goal would ultimately be the one to send the Hillies to the state tournament. Coming into the game, Haverhill needed just one more win to qualify for the postseason, and once the Hillies took the lead, the large contingent of Haverhill fans steadily grew louder in anticipation.

After junior Rob Budds scored late in the third period to give the Hillies an insurance goal, the Haverhill faithful burst into wild celebration. The players followed suit once the clock hit zero, spilling over the boards to mob their teammates on the ice.

Coming in at 6-13, Pentucket was well out of tournament contention and knew last night would be their last game of the season. Burns said that despite their record, he was proud of his team’s performance – particularly his seniors – and added that he believes he has a solid base of talent to build on going forward.

“We’ve got a lot of younger kids that are coming in,” Burns said. we’ve got two freshmen goaltenders and an eighth grader coming up, we’re optimistic about the next couple years, we feel we’ll be in the hunt.”

Newburyport, MA - Everett L. Bridges, age 86, longtime resident of Newburyport, passed peacefully at Port Health Care Center after a period of declining health. He was the beloved husband of the late Joan (Landry) "Joanne" Bridges. Visiting hours will be Friday, October 23, from 4 to 8 p.m.,…