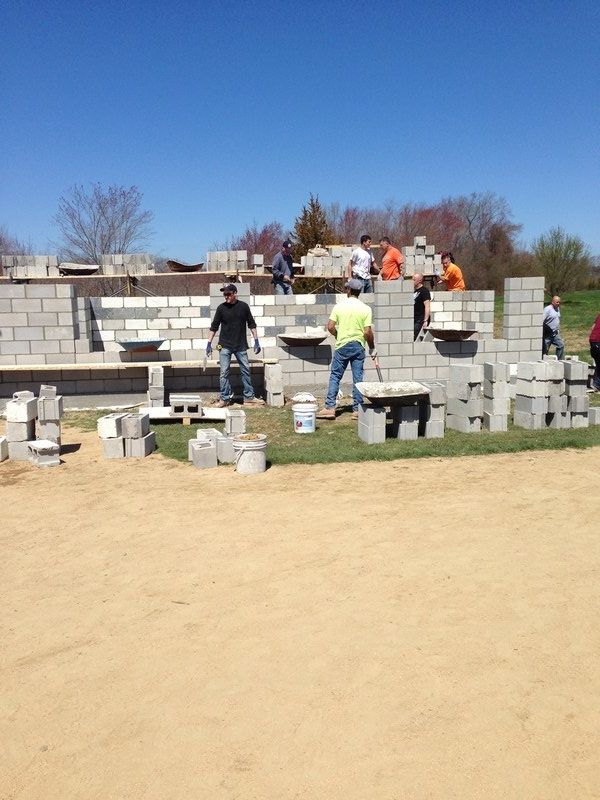 Courtesy PhotoStudents and workers clamber around a pile of bricks while working on the new softball dugouts at Triton Regional High School last weekend. 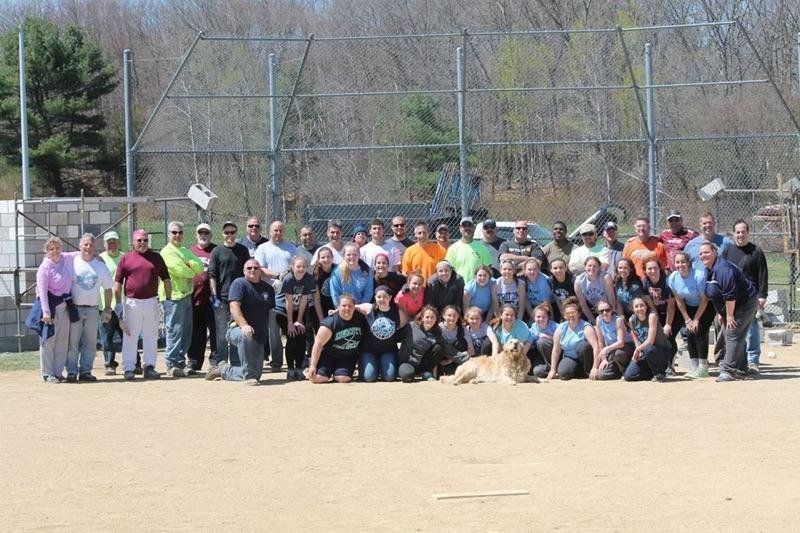 Courtesy PhotoMembers of the Triton community gather for a group photo after working on the new Triton softball dugouts last weekend.

Courtesy PhotoStudents and workers clamber around a pile of bricks while working on the new softball dugouts at Triton Regional High School last weekend.

Courtesy PhotoMembers of the Triton community gather for a group photo after working on the new Triton softball dugouts last weekend.

It was a brisk but sunny day as the many juniors on Triton’s varsity softball team were settling in to prepare for the SAT exam — certainly a mentally strenuous task for any Saturday morning. At the same time, however, the varsity players who weren’t going through such mental gymnastics were engaged in equally strenuous physical labor, as they collaboratively prepared for the construction of the school’s two brand new softball dugouts.

Guided by experts in their craft, several players and their respective parents, along with members of the Triton community, met a team of 32 bricklayers from Local 3 of the Brick Layers Union at Triton’s home field last Saturday to begin a long morning of laying bricks, transporting buckets of wet cement, and perfecting the cinder blocks that would be used to create the dugouts’ foundations.

Eager to finally have a home game, the players readily joined in getting their hands dirty. Catcher Julia Hartman said that though it was a long day, the hard work put in will certainly pay off.

“At first I was assigned to simply take pictures of the work being done, but once I got to start preparing all of the cement blocks, I could feel our team really getting involved and we began relying on one another.” Hartman said. “It definitely helped a lot with our team chemistry.”

In addition to serving as a bonding experience, the day’s work provided a rigorous workout for participants of all ages. There were several parents in the thick of things, lifting cinderblocks, pushing wheelbarrows and scraping away pieces of old cement. Riley Kraemer, who was in charge of the Local 3 of the Bricklayer’s Union, played a crucial role in directing the process and making sure it ran as efficiently as possible. Kramer’s time and contribution was free of charge; he said that seeing people come together to work towards a common goal was a reward in and of itself.

“We usually do a few freebies a year as community service, generally for youth organizations such as baseball or hockey,” Kramer said. “We live in the community and a couple of guys there were Triton alumni, so it’s good to give back. Everyone was great. There was pizza and doughnuts, and it’s nice to meet new people that you never would’ve had a chance to meet otherwise.”

Aside from Kramer and his men, several members of the community with a history and involvement in the softball program volunteered their knowledge of construction or labor. Among these were Peter Martin and Craig Pearson, who handled the excavation and foundation of the dugouts. They assisted those less-experienced workers in organizing their duties and setting the general plans in motion.

“We are lucky in the Triton district to have people and local businesses who are willing to donate time, materials, expertise or money towards community betterment,” Martin said. “Most people are generous by nature and even more so when something pertains to the school or local youth programs. Yesterday really demonstrated that if enough people give back, it makes for light work.”

An attorney by background and member of the school committee, Paul Lees was another key individual whose hard work showed. He was able to get the cement mixer running when it appeared it wasn’t going to be available. He then manned the machine and made sure there was enough mortar for the guild of bricklayers.

By mid-afternoon, the job was virtually done and the softball players headed down to Peabody High School, where they fought hard in their eighth game of the season, but nonetheless were defeated. Head coach Michelle Brewer remains positive and said that the team looks forward to playing on their own Viking ground, something that will soon be made a reality thanks to the effort put earlier this month.

Not only will the dugouts serve as a home for the players, a place to “hang their hats,” but also as a tangible symbol of the community’s hard work towards a common endeavor. Perhaps one could say that the dugouts are a sort of prelude to the grand stadium project that awaits, a small example of the community coming together to create something that physically, will last a long, long time but more importantly, something that will help to enrich the intangible Viking legacy.

Shannon Lyons is a junior at Triton Regional High School and is a member of the Triton varsity softball team and a writer for the Triton Voice, the Triton school newspaper.

Newburyport, MA - Daniel B. Souther, age 58, former resident of Newburyport, died unexpectedly Sunday afternoon, October 18, 2020 in Haverhill. Born in Newburyport, February 3, 1962, he was one of se children of the late Fred L. and Mary C. (Barrett) Souther and had attended schools in Newbu…

Newburyport, MA - Everett L. Bridges, age 86, longtime resident of Newburyport, passed peacefully at Port Health Care Center after a period of declining health. He was the beloved husband of the late Joan (Landry) "Joanne" Bridges. Visiting hours will be Friday, October 23, from 4 to 8 p.m.,…