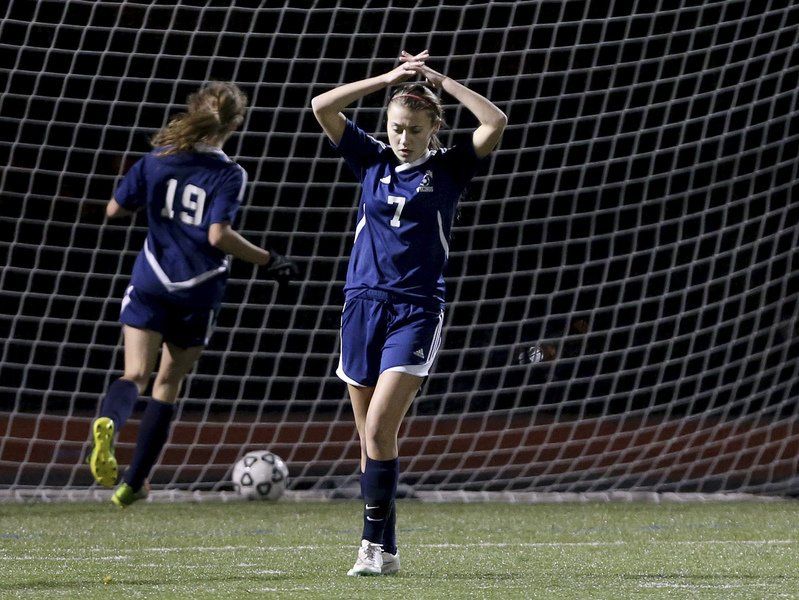 MARY SCHWALM/Staff photo Triton's Shauna Murrin (7) reacts as teammate Meredith Wilcox fishes the ball out of the net after Lynnfield scored their second goal in the second half during their MIAA semifinal playoff soccer game in Lynn. 11/10/14 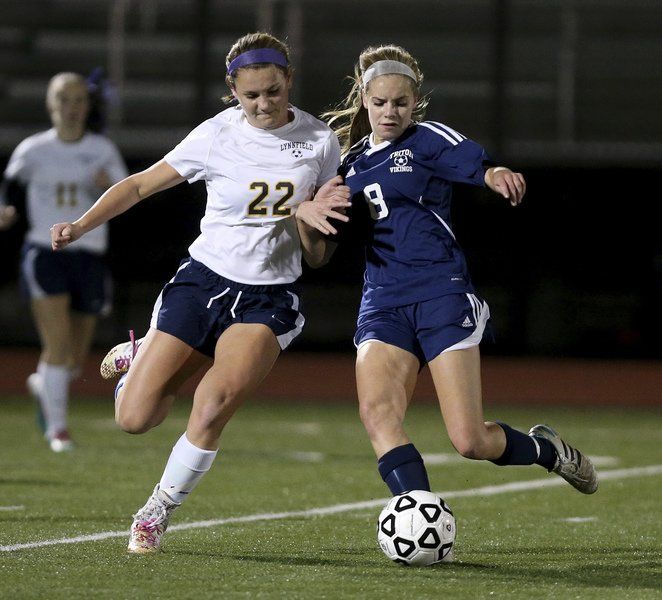 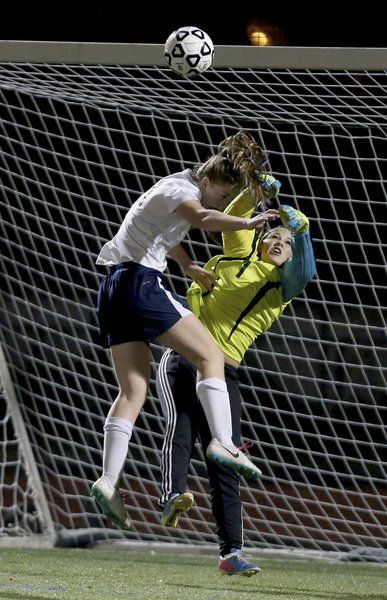 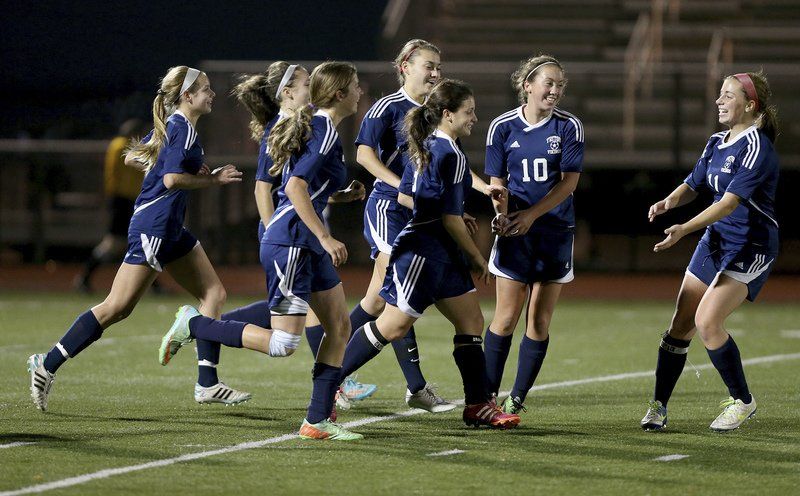 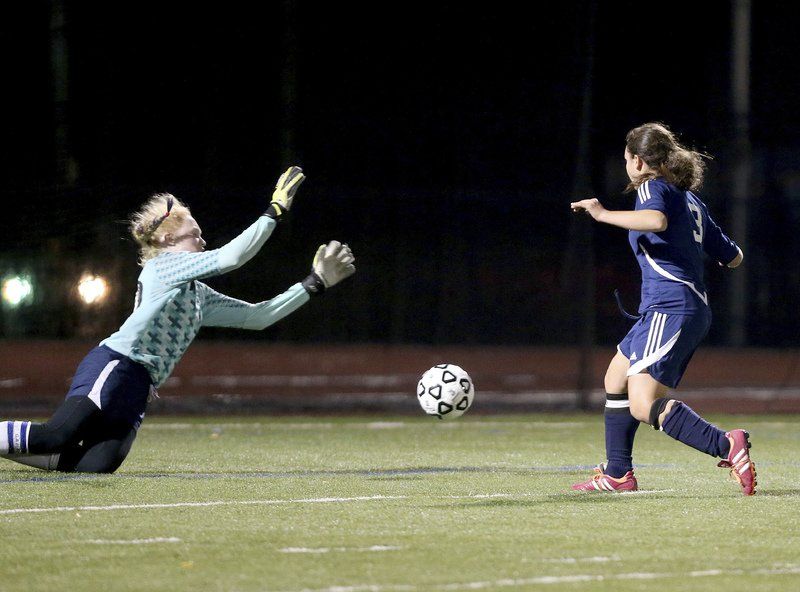 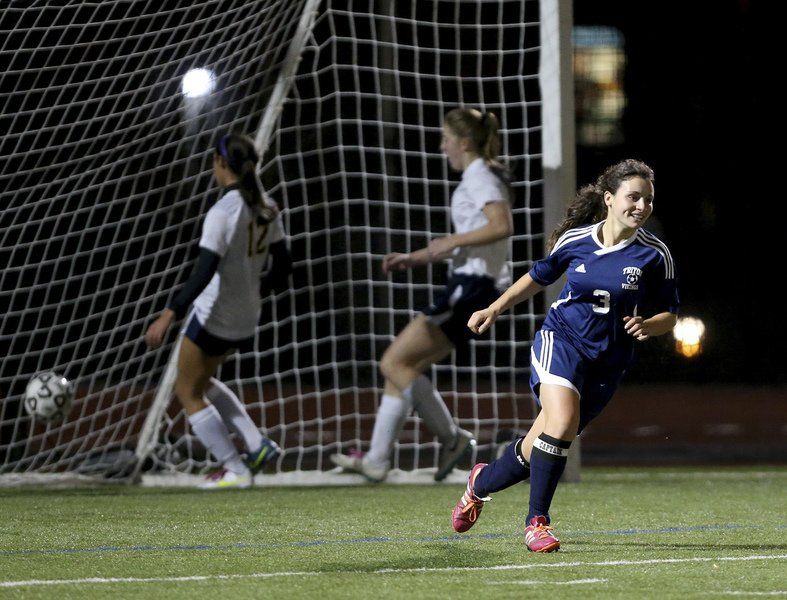 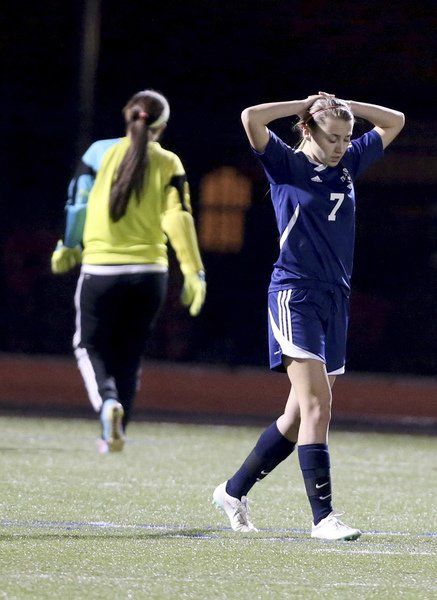 MARY SCHWALM/Staff photo Triton's Shauna Murrin (7) reacts as goalie Christine Ciccone returns to the goal after Lynnfield scored their second goal in the second half during their MIAA semifinal playoff soccer game in Lynn. 11/10/14

MARY SCHWALM/Staff photo Triton's Shauna Murrin (7) reacts as teammate Meredith Wilcox fishes the ball out of the net after Lynnfield scored their second goal in the second half during their MIAA semifinal playoff soccer game in Lynn. 11/10/14

MARY SCHWALM/Staff photo Triton's Shauna Murrin (7) reacts as goalie Christine Ciccone returns to the goal after Lynnfield scored their second goal in the second half during their MIAA semifinal playoff soccer game in Lynn. 11/10/14

LYNN — The Triton girls soccer team’s season came to an end last night, as the Vikings squandered a one-goal halftime lead to fall to Lynnfield 2-1 in the Division 3 North Semifinal.

Triton’s Cara Orlandi scored the lone goal for the Vikings midway through the first half, but Lynnfield got a goal from Jess Duhaime early in the second to tie it, and after several good chances that didn’t quite happen, Liz Reed scored the winner for the Pioneers in the 61st minute to propel Lynnfield to the final.

“It was an awesome game, a back and forth game. We scored first, but then Lynnfield pressured, scored, and then got another one unfortunately on a bad break,” said Triton coach Mike Weisberg. “Someone has to win and today it was their day. There may have been another day where it would be our day, but today it was theirs.”

For the most part Lynnfield dominated the possession battle early on, but while Triton had only a handful of opportunities, they made them count. Cara Orlandi put Triton ahead in the 17th minute after Meredith Kennedy made a great play on the right side of the box, tapping the ball back with her heel to Orlandi right in front of the net, who was able to easily beat the keeper to give the Vikings the lead.

Triton nearly made it 2-0 about five minutes later after a ball bounced off the turf in front of the keeper and over her head. Several Lynnfield defenders were able to box out the Viking forwards, however, and the keeper recovered to preserve the one-goal game.

Lynnfield called a timeout shortly after, which seemed to help as the Pioneers came out much crisper than they’d been for the 10 minutes prior. The Pioneers began completing their passes in the midfield, and for the rest of the half they applied heavy pressure to the Triton net.

In response, the Vikings started keeping as many as nine players in the defensive zone to keep the Pioneers from completing any through passes that could lead to a dangerous breakaway. Triton also did a good job keeping Lynnfield offsides, as the Pioneers were called for close to a half dozen violations, including one that resulted in a goal being called back.

The game was still 1-0 going into halftime, but Lynnfield kept up the pressure coming out of the break, only now they started making them count. Lynnfield tied the game at one in the 46th minute after sophomore forward Liz Reed crossed the ball into the center of the box, where a scrum ensued and initially it appeared the Vikings had cleared the ball away. The referees conferred afterward, however, and ultimately determined that the ball had crossed the line. Senior forward Jess Duhaime was credited with the goal.

Lynnfield nearly took the lead three minutes afterward when a shot bounced off the goalie’s hands right in front of senior captain Paige MacEachern, but Triton caught a break when MacEachern’s shot sailed over the top of the net.

Triton got lucky again after another shot landed right on the goal line, but despite the fact that there were at least six Lynnfield players within easy striking distance, the Pioneers were somehow unable to put the ball in the net.

The Vikings’ luck finally ran out in the 61st minute, after a defensive miscue led to a breakaway for Reed, who scored the go-ahead goal to put Lynnfield in front 2-1. Despite moving almost everyone up on offense over the game’s final minutes, Triton wasn’t able to get a good chance, and ultimately time ran out.

Triton will finish the season 14-7-2, while Lynnfield will go on to face North Reading in the regional final.