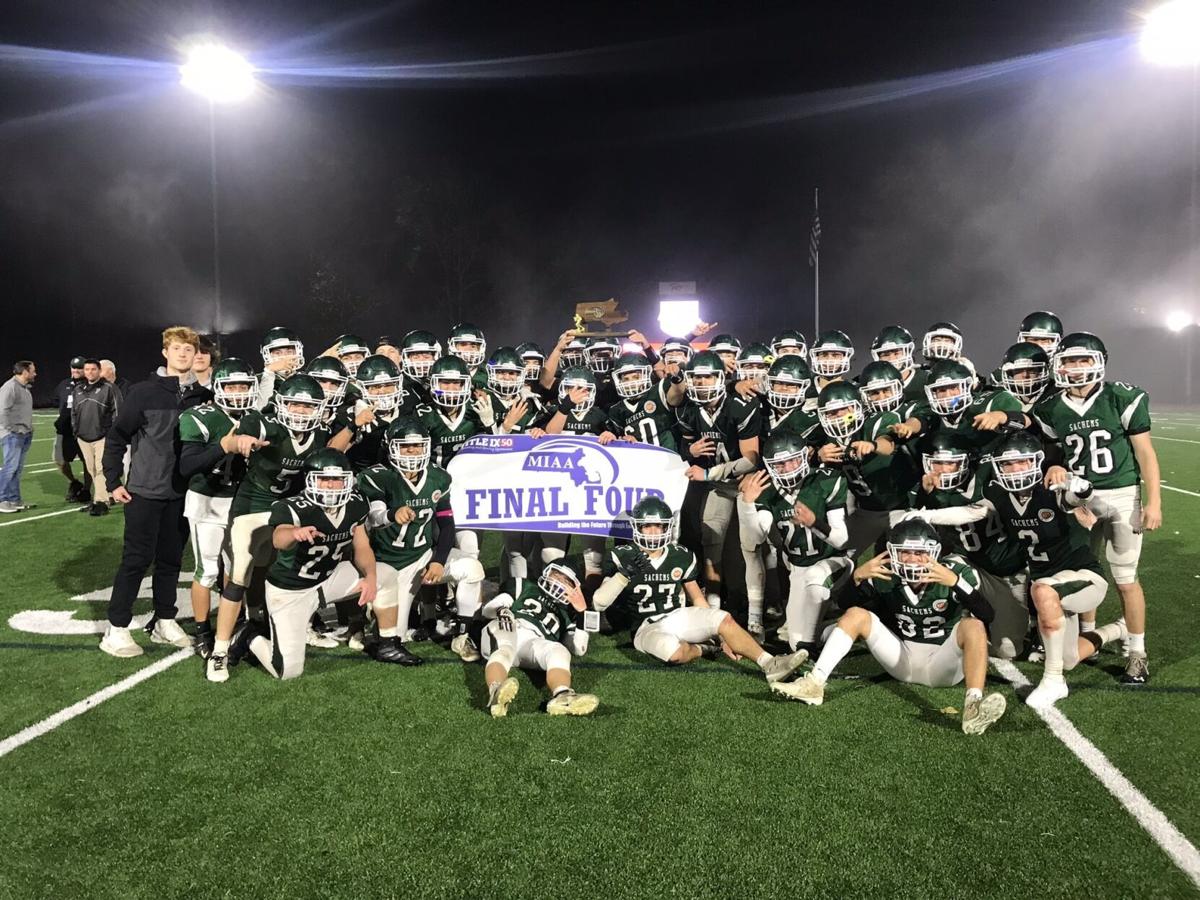 A victorious Pentucket football team celebrates its win Friday night, which clinched the team a spot in the Division 5 state semifinals next week. 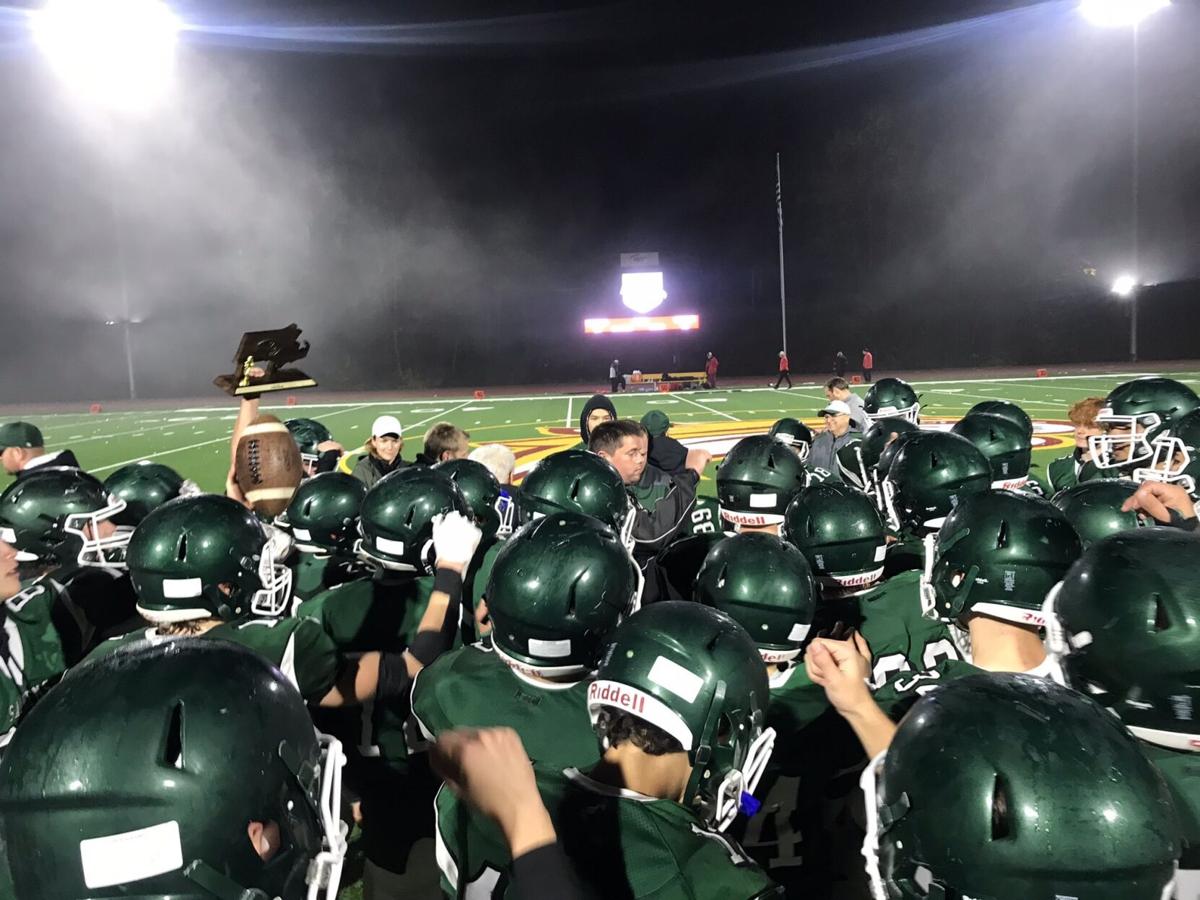 A victorious Pentucket football team celebrates its win Friday night, which clinched the team a spot in the Division 5 state semifinals next week.

HAVERHILL – Two playoff opponents have tried, neither has even slowed down Pentucket Regional’s Chase Dwight.

The senior quarterback ran for two scores, threw for a third and locked up the victory on defense with a late fourth-quarter interception as Pentucket held off Old Rochester, 21-14, here on the turf at Whittier Tech to claim a spot in next week’s Division 5 Final Four.

“We’re definitely motivated. Last year definitely hurt us, and we took that anger into this year,” said Dwight of his team’s motivation after an 0-5 “Fall 2” campaign last spring.

“(Friday night) I was surrounded by my teammates, the energy was there, the confidence, it felt really good.”

Dwight finished the night at 15 for 30 for a season-high 262 yards and a TD through the air.

Most of that work came the hard way, as he challenged the OR secondary with the look of a run and then unloaded repeatedly on the move.

“We talked about it last week, he’s physically tough, but the mental side of it, he doesn’t get rattled by anything,” said Pentucket coach Dan Leary. “He puts the ball where it’s supposed to be. Maybe not every pass is perfect, maybe not every catch is perfect, but it’s consistently going where it needs to be. and once he gets downhill, he’s really tough to bring down.

“He’s someone who has put a lot of time into it. Quarterback was new to him. We made him a quarterback as a sophomore, so he’s put in the time to work at it. “

The teams split a pair of second-quarter TDs, each coming via the quarterback run – Noah Sommers on a 16-yarder for the Bulldogs and Dwight plowing up the gut from the 1.

It may have just been tied at 7-7, but Pentucket had to be feeling good on two fronts.

First, the adjustments to the defense, sliding Brandon Lee up from safety to outside linebacker and sliding ball-hawking backers Dwight and Kyle Ventola over had paid big dividends in shackling Old Rochester’s downhill run game.

“We switched up the defense a little bit this week, and the kids did an awesome job of picking it up,” said Leary. “They run a little smash-mouth and a little triple option. The guys had assignments and they did a great job of executing it.

“Brandon moved up and did a really nice job, the whole defense played really tough.”

The other positive was that Dwight and top target CJ Condon picked up right where they had left off a week ago in the playoff-opening win vs. Triton.

“He’s a talented player, good route runner, got good hands, and we just have that connection,” said Dwight, who hit Condon 10 times on Friday night for 189 yards after the two torched Triton for 106 yards on five passes a week ago. “We’ve played sports, played basketball, played football for five of six years. That chemistry has developed over those years. I trust him definitely.”

Pentucket took charge in the third, grabbing the opening kick and rolling 65 yards on nine play and assuming the lead when Dwight hit Adam Payne for a 12-yard score.

Talk about a tough throw, fourth-and-goal from the 12, Dwight rolled left and threw a strike off the wrong foot to Payne in the left corner.

“He’s rolling to his left, a little pressure came from the inside. He got a great throw off, I’m really proud of him,” said Leary.

From there, it was about defense and the clock.

Old Rochester hung tough, slicing the lead in half with five minutes to play. The Bulldogs would get one more chance for a rally, taking over at their own 33 with 2:20 left. Pentucket would have none of it.

On fourth-and-10, Dwight stepped in front of a Sommers throw down the middle and picked it off, sealing the win and sparking the victory celebration for the Pentucket faithful at this week’s home away from home.

“If we stay together, play as a team, we can make a run,” said Dwight. “The chemistry with my team, we just kept moving that ball, throwing the ball, it just worked out.

Pentucket will now await the winner of Saturday’s quarterfinal between top-seeded North Reading and No. 8 Norton.

Pentucket dropped a 20-0 decision to North Reading back in September.

“We definitely feel like a stronger team now,” said Dwight.