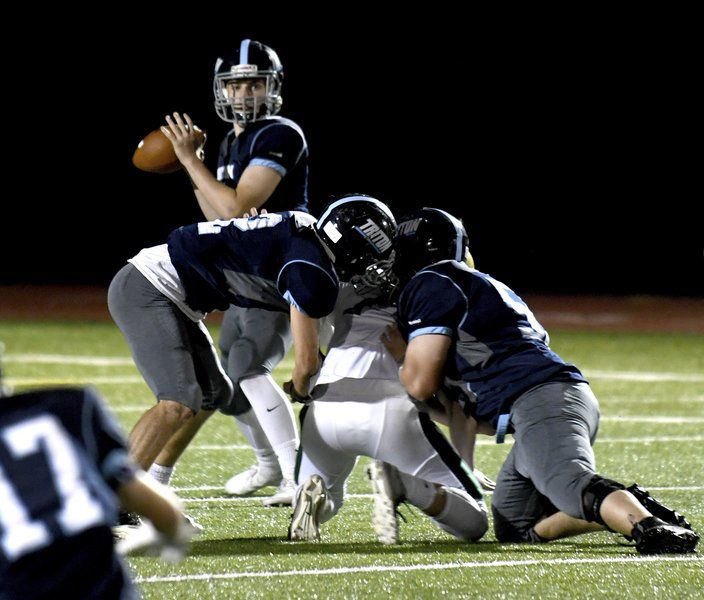 JIM VAIKNORAS/Staff photoTriton’s Kyle Odoy looks downfield during last fall’s game against North Reading. The quarterback would suffer a season-ending shoulder injury later that night, but is now back healthy and ready to lead the Vikings into a new season. 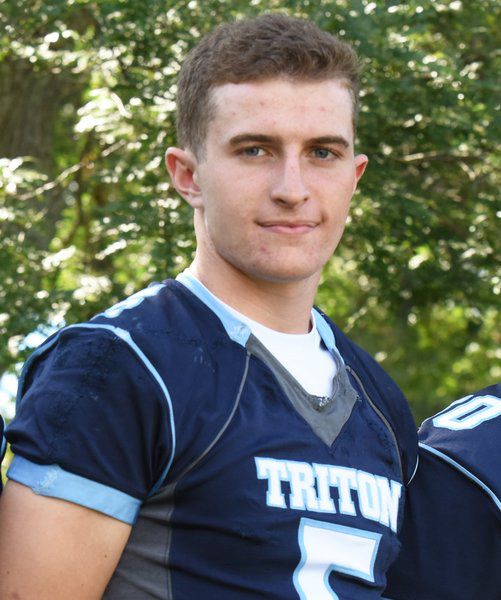 JIM VAIKNORAS/Staff photoTriton’s Kyle Odoy looks downfield during last fall’s game against North Reading. The quarterback would suffer a season-ending shoulder injury later that night, but is now back healthy and ready to lead the Vikings into a new season.

The depth of football despair at Triton Regional in 2018 reached brutal lows.

In his first year at the helm, coach Ryan McCarthy learned who he could and could not count on. Heck, all the Vikings did, from the most talented senior to the freshman at the end of the bench.

Triton dug foxholes and hunkered down amid the 0-11 storm in which it was outscored 422-84. And who did the Vikings find by their side in the football foxhole, slugging it out with them? Kyle Odoy.

Lost for the season in Week 4, the sophomore quarterback found a way to step up when others wouldn’t or couldn’t. He provided hope, a chance at future redemption.

And the climb out for the Vikings starts on Friday night here at home in the 2019 season opener against rival Newburyport.

“It says an awful lot that these kids voted him as a junior captain, coming off a year when he was hurt,” said McCarthy of the junior quarterback/defensive back Odoy. “The kid was hurt and he never missed a practice. He was a leader when he was on the field and when he wasn’t. He was always helping out the kids behind him any way he could, just a natural-born leader.”

If Triton is to end the losing skid, and there is confidence with that they certainly will be it this week against the point or down the road, Odoy should be right in the center of things.

It will be poetic. As a freshman, Odoy tossed two-point pass to then-QB Tommy Lapham in the Vikes last win, on Thanksgiving morning 2017 vs. rival Pentucket.

“We’re definitely young, but we have players. There are plenty of talented kids on this field,” said Odoy. “I think we definitely have what it takes to turn this thing around.”

“Most every team last year beat us by 30,” said Odoy. “The Newburyport game was really close (15-14) last year. But whether it happens this week or whenver, it has to happen.”

“I just came up to make a tackle, and the next thing I know my (non-throwing) shoulder was separated,” Odoy said.

Luckily, he avoided surgery, and intense physical therapy got him back on the court for coach Ted Schruender to start the hoops season.

But the months of October and November? In a word, miserable.

“It was definitely one of the toughest things I’ve ever gone through,” said Odoy. “To see the team go down, and so many other guys got hurt, too. It was so tough. I couldn’t really do anything to help.”

Odoy certainly tried both with his teammates and getting himself better. While he didn’t pitch for McCarthy and the Vikes in the spring, he played every game at first base.

And this summer, splitting time between football training, summer basketball, he got on the mound again with exceptional results.

“I think, with all the exercises I did, my shoulder is definitely stronger,” said Odoy. “It feels much better, much stronger.”

Odoy has no limitations. He’s tackled this preseason like every other.

“I’ve gone full speed every day with full contact, and it feels great,” he said. “There are no implications and it just feels great to be back.”

Friday night against the Clippers, Odoy will start behind center and at safety.

“That’s a very good thing,” said McCarthy. “He’s going to be out there for us at all times. If he’s on the field, we’re a better team. He understands the offense and knows how to read defenses. He’s coachable and he’s competitive.”

Apparently, Odoy is also contagious. There is a new, rejuvenated feeling in the Viking camp.

“There’s just a 100 percent better vibe,” said Odoy. “All that poison, the stuff that brought us down was eliminated right off the bat. I can’t stop thinking about this season.

“Football was the reason I didn’t even mind coming back to school.”