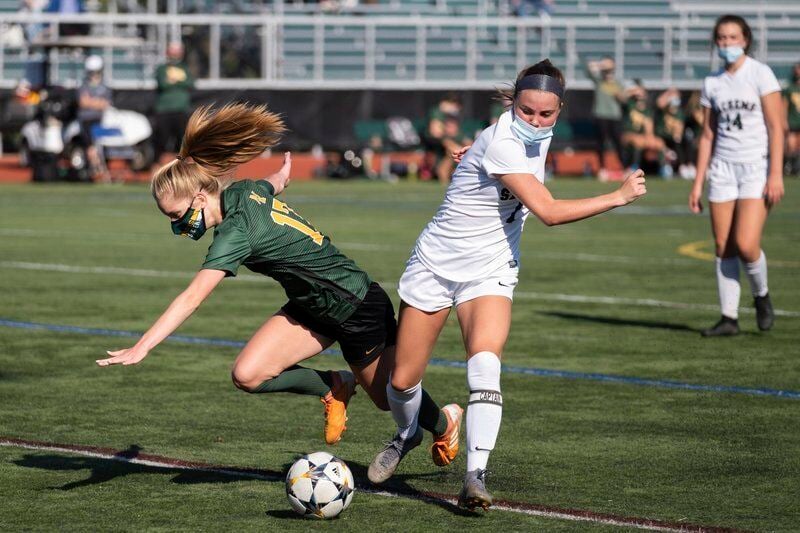 RYAN MCBRIDE/Staff photoPentucket's Jacey Jennings collides with a North Reading defender during Sunday's game. Jennings and her team enjoyed one of the best seasons in program history this fall despite the unusual circumstances. 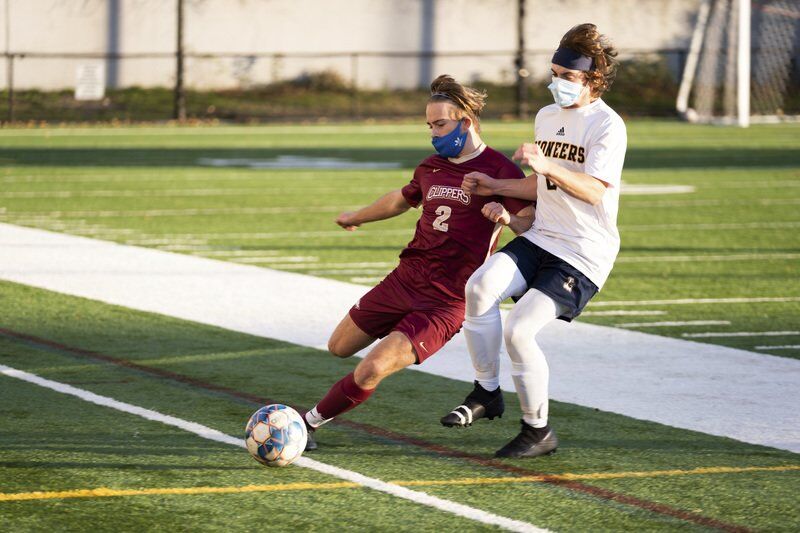 RYAN MCBRIDE/Staff photoNewburyport's Graham Smith battles for the ball near the sideline with a Lynnfield defender.

RYAN MCBRIDE/Staff photoPentucket's Jacey Jennings collides with a North Reading defender during Sunday's game. Jennings and her team enjoyed one of the best seasons in program history this fall despite the unusual circumstances.

RYAN MCBRIDE/Staff photoNewburyport's Graham Smith battles for the ball near the sideline with a Lynnfield defender.

We made it! The 2020 fall season, which we weren’t sure would even happen until deep into the summer, has reached a successful conclusion. Despite a litany of challenges, dozens of postponements and a handful of outright cancellations, most teams were able to play the majority of their games without incident. So what did we learn? How will this year and its teams be remembered years down the road? Here are five quick thoughts on the craziest, most unpredictable fall season in area history.

1. Games weren’t that much different

Once the fall’s safety modifications were announced, the first thought I had was that it was going to be impossible for anyone to play defense. How could you stop someone in soccer if you couldn’t get a body on them? What were you supposed to do in field hockey when you’re playing seven on seven and suddenly the opposing offense had practically the whole field at its disposal to move against you?

I thought we might see record-breaking offenses and teams across the Cape Ann League averaging more than five goals per game, but that didn’t happen. Instead, defenses adjusted and games mostly played out the same way they always have, and the overall scoring numbers reflect that.

That being said, there were a handful of elite players who took advantage of the new rules and saw their production skyrocket. Superstars like Newburyport field hockey’s Callie Beauparlant and Pentucket girls soccer’s Jacey Jennings, for instance, matched or exceeded their scoring totals from 2019 despite playing in half as many games.

In terms of team success, the Greater Newburyport region enjoyed a historic level of dominance across all sports. Out of the six sports that were sponsored by the league this fall, a local team won or shared the CAL Kinney title in all six.

The champions included Newburyport boys soccer (7-1-2), which finished in a three-way tie for first with Lynnfield and North Reading to earn a share of the program’s first league title, and Pentucket girls soccer (7-2-1), which finished as co-champions with North Reading for its first title since 1999. Newburyport field hockey (8-2) won its first title since 2011 and Newburyport golf (10-0) ran the table to complete the first undefeated season in program history, Triton boys cross country (6-0) captured its first league title in decades, and in girls cross country the title will either go to Pentucket (4-0), which ran the table and dominated all of the league’s best teams, or Newburyport (5-1), which ran two more races and earned more wins but lost to Pentucket head-to-head. That title situation will be worked out when league officials meet over the next week or two.

3. What could have been?

Each of the teams that won CAL Kinney titles were outstanding and could make a strong argument for being among the best in their program’s history. Unfortunately, beyond the league title, these teams won’t get the opportunity to prove themselves on the big stage like their predecessors.

Could Newburyport boys soccer or Pentucket girls soccer have won a state title? They certainly would have had a great shot. How about the Newburyport field hockey team? Would they have had what it takes to dethrone perennial champion Watertown in the tournament? We’ll never know. What about the Newburyport golf team? Surely they could have made some noise at states, or at the very least at the annual River Rivals Tournament. And who wouldn’t have wanted to see what Triton’s Graham Stedfast and Sarah Harrington, Pentucket’s Phoebe Rubio and Kaylie Dalgar or any of the Newburyport standouts could have done in the big postseason cross country races?

Usually in the fall you only have to worry about rain the forecast when it comes to scheduling disruptions, but over the past two months you truly had to be ready for anything at a moment’s notice. Take for instance the highly anticipated showdown between Newburyport and Pentucket boys soccer, which was originally scheduled for Oct. 7 but wound up being postponed with less than two hours notice after Pentucket had to shut down all sports for a week due to a possible COVID-19 outbreak. Georgetown girls soccer also shut down abruptly for about four days out of an abundance of caution around the same time, and as the season went along everyone in the league waited on baited breath for the state to release its weekly COVID-19 report, which more often than not contained bad news that at least one CAL school had gone into the “red.”

With school officials at Manchester Essex and Rockport prohibiting their teams from playing “red” schools, those weekly reports usually prompted more delays, and eventually the logistics of holding the CAL Tournaments at season’s end became impossible. Even still, most CAL teams were able to complete their seasons, but almost nobody was able to do so without rescheduling at least one of their games along the way.

It’s still far too early to tell what the future will hold for high school sports the rest of this year, but while football and volleyball players weren’t able to suit up this fall, recent developments bode well for those sports being able to take place in the early spring. The state recently unveiled its latest guidelines for youth, amateur and K-12 sports, which indicate that football and other high-risk, high-contact sports played outside will be permitted as long as safety modifications are made.

The process of developing those modifications is still a long way from completion — right now everyone is rightly focused on the upcoming winter season — but having the state onboard is a huge step forward. As for volleyball, the biggest concern this fall was whether or not the sport could be safely held indoors. Those issues are being hashed out with winter sports like basketball and ice hockey now, and if those sports are played, which seems likely, there’s no reason to imagine why volleyball couldn’t be played in the Fall 2 season too.