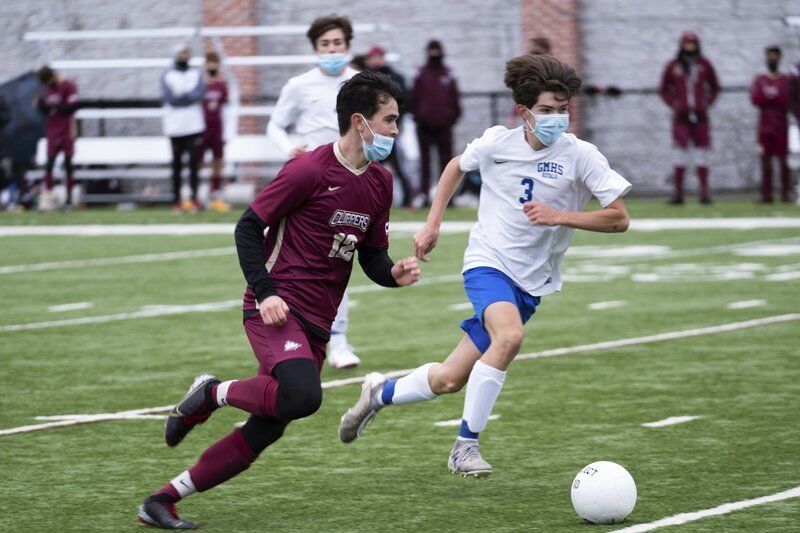 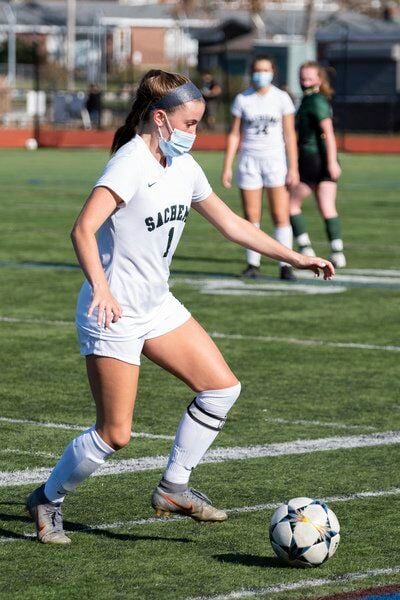 RYAN MCBRIDE/Staff photoDespite a litany of safety modifications, including mandatory mask wearing during play, Jacey Jennings and the Pentucket girls soccer team enjoyed one of their best seasons in program history to win their first CAL title since 1999. 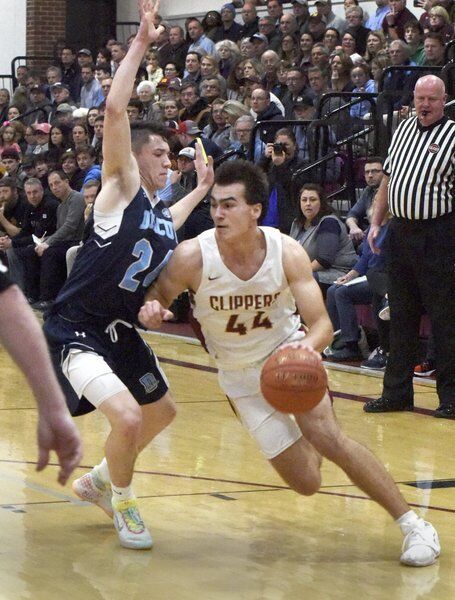 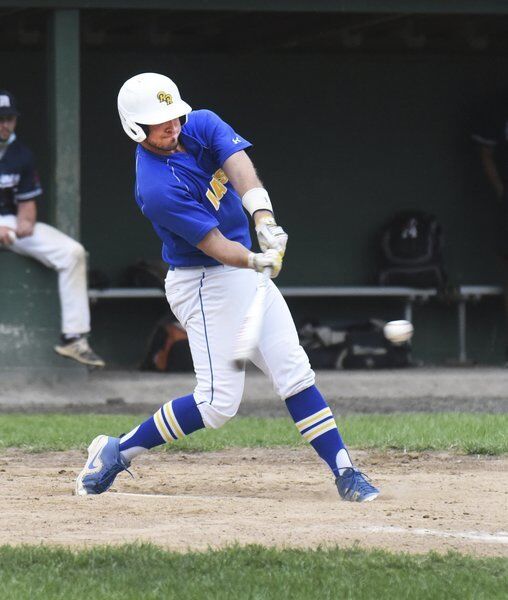 BRYAN EATON/Staff photoRowley's Justin Bolla connects for the first of his two RBI doubles in the first inning of Game 1 of the Intertown Twilight League championship against the Manchester Mariners. Rowley went on to sweep the championship series thanks in large part to Bolla's heroics.

RYAN MCBRIDE/Staff photoDespite a litany of safety modifications, including mandatory mask wearing during play, Jacey Jennings and the Pentucket girls soccer team enjoyed one of their best seasons in program history to win their first CAL title since 1999.

BRYAN EATON/Staff photoRowley's Justin Bolla connects for the first of his two RBI doubles in the first inning of Game 1 of the Intertown Twilight League championship against the Manchester Mariners. Rowley went on to sweep the championship series thanks in large part to Bolla's heroics.

This past year was one that nobody who lived through it will ever forget. The arrival of the coronavirus pandemic brought the biggest disruption to American life seen in decades, and for local athletes it was a painful reminder to appreciate every game, practice and moment, because you never know when it could all end.

Seasons were lost, dreams were dashed, and yet amid the disruption the local sports community came together and found a way. Here is a look back on 2020 and all that it brought, both good and bad.

1. Gone in an instant

In retrospect, it’s hard to believe just how suddenly the pandemic erupted into the public consciousness. Back in early March, the winter state tournaments were well underway, and I remember arriving at the Tsongas Center for Amesbury and Pentucket girls basketball’s sectional championship games with no inkling that we were on the verge of disaster. Two days later, when I was back for Triton hockey’s sectional final against Lincoln-Sudbury, the sense of unease within the building was palpable.

None of those local teams won, but even if they had their days would have been numbered. By Wednesday, Utah Jazz center Rudy Gobert tested positive for COVID-19, bringing the NBA season to a screeching halt, and by the following weekend the high school state championship games were cancelled, with their participants declared co-champions.

The dominos continued to fall from there. Colleges across the country shut down their seasons, abruptly ending the careers of thousands of seniors. Amesbury’s Ashley Waters, the head coach of Boston University softball, was in Los Angeles with her team when the news came, resulting in a surreal “Senior Day” where the girls got to play one last game before calling it a season. Rowley’s John Boyle had already arrived in Iowa to defend his Division 3 NCAA championship when he found out the tournament had been cancelled.

Ultimately the entire spring season was lost, leaving a gaping hole in the sporting calendar where lifelong memories should have been made. It was a particularly bitter finish for the seniors who missed out on what should have been one of the best times of their lives, and with the pandemic nowhere near over, it was fair to wonder if sports would even come back in time for the fall?

While things are certainly far from back to normal, sports did return to the local landscape eventually. Through the hard work of league organizers, school and health officials, coaches, parents and the athletes themselves, games resumed after the Fourth of July and so far have largely gone off without a hitch.

That wasn’t a sure thing, and there were often serious concerns about the safety of playing sports, especially indoors. But along the way student-athletes stepped up and advocated for themselves, making sure their voice was heard and in some cases shifting the tide of opinion in favor of letting them play. Triton girls soccer held a CAL-wide rally for fall sports in downtown Newburyport in the fall, and more recently the Pentucket basketball programs rallied in West Newbury ahead of a crucial Board of Health meeting, which ultimately went in their favor.

Getting back on the field has required sacrifices. Field hockey teams had to adjust to a radically different 7 on 7 game while soccer players had to learn how to play without heading and throw-ins. Football, track, volleyball and wrestling had to be postponed entirely, but for now all are still on schedule to take place later in 2021, and after everything they’ve been through the athletes all deserve a lot of credit for handling an unprecedented situation as well as anyone could realistically expect.

3. A winter to remember

Crazy as this year has been, it’s easy to forget that there actually was a time in 2020 before the pandemic hit. Prior to its abrupt and sad conclusion, the 2020 winter season was packed with memorable moments and thrilling accomplishments.

On the hardwood, Newburyport’s Parker McLaren turned in one of the greatest seasons the area has ever seen, averaging 22.9 points per game to help the Clippers win their second straight CAL Kinney title while becoming the fourth player in Newburyport boys basketball history to reach 1,000 career points. Alli Napoli also reached 1,000 points for Amesbury girls basketball, helping lead the Indians to a CAL Baker title and another Division 3 North Finals appearance, and Pentucket girls basketball was great as always, with the defending state champs winning their sixth straight CAL Kinney title and once again reaching the Division 2 North Finals.

On the ice, Triton hockey followed its greatest season in decades with an even better one, going 17-5-2 to reach the Division 2 North Final. Meanwhile, at Pentucket, Richie Hardy stuck with his hometown program after his talented linemates transferred to prep school and wound up becoming the second player in school history to reach 100 career points.

On the mat, Triton’s Anthony Ostrander capped off his incredible career with a second Division 3 state title and became the first local wrestler to top 200 career wins, finishing 212-55 in six varsity seasons.

When sports finally resumed after the Fourth of July, the first to get back on the field were the local summer baseball teams, who collectively delivered the most memorable summer in nearly a decade.

Leading the charge were the Rowley Rams, who captured their first Intertown Twilight League championship since 2011 thanks largely to the efforts of 29-year-old slugger Justin Bolla. Bolla was as dominant as you can get during the playoffs, going 11 for 18 (.611) with four home runs, five doubles and 16 RBI in five games, including a walk-off, championship-winning two-run home run to clinch the title. The Newburyport Senior Legion team also captured the 2020 Essex County Baseball League title, and in the North Shore Baseball League the Rowley Nor’Easters enjoyed a renaissance, finishing second in the league standings.

But nobody made a splash like Rowley’s Thomas White, the Phillips Andover sophomore who continued to demonstrate himself as one of the nation’s top pitching prospects. The 6-foot-4 lefty dominated the summer circuit, striking out 67 batters in 27.1 innings without allowing a run, and he made national headlines within the scouting community after shutting down the North Shore Navigators during a showcase at Fraser Field. He would later be named the No. 1 draft prospect from the Class of 2023 by Baseball America.

When high school sports finally returned in late September, the area was treated to a month-long sprint to the finish that culminated in numerous historic titles.

On the soccer pitch, Newburyport boys soccer finally broke through and earned a share of its first Cape Ann League title in program history, and Pentucket girls soccer similarly dominated to earn its first league title since 1999. Newburyport field hockey took advantage of the modified rules to clinch its first title since 2011, the Newburyport golf team ran the table for the program’s first-ever perfect season, and in cross country the Triton boys and Pentucket girls took down all comers to clinch their respective titles in a season unlike any other.