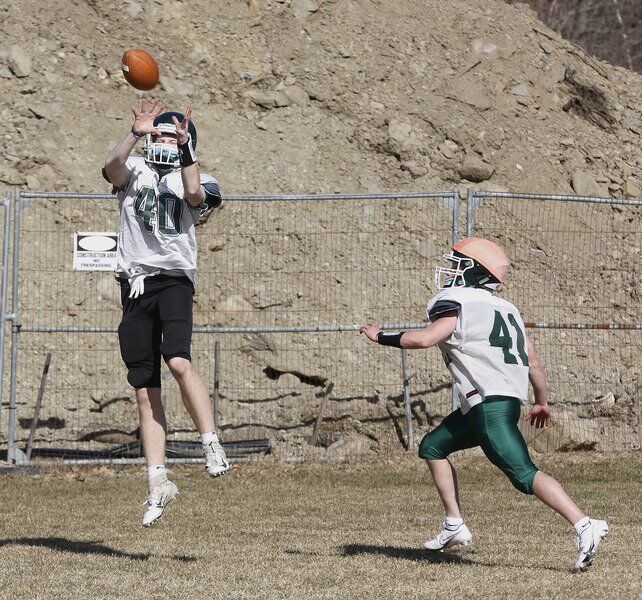 MIKE SPRINGER/Staff photoPentucket wide receiver Aidan Tierney catches the ball with teammate Dylan O'Rourke in coverage during a drill in practice on Tuesday. 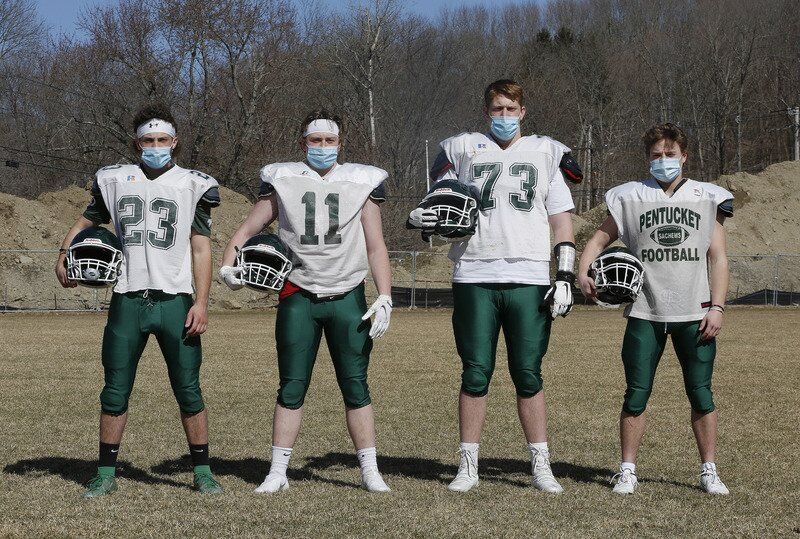 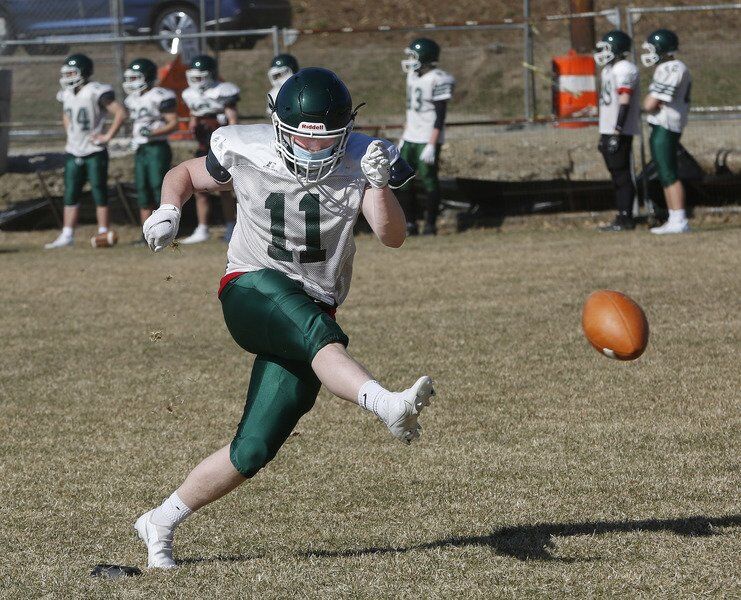 MIKE SPRINGER/Staff photoPentucket's Andrew Melone kicks the ball off during practice on Tuesday. Melone and his teammates will open their season Friday night at Lynnfield High.

MIKE SPRINGER/Staff photoPentucket wide receiver Aidan Tierney catches the ball with teammate Dylan O'Rourke in coverage during a drill in practice on Tuesday.

MIKE SPRINGER/Staff photoPentucket's Andrew Melone kicks the ball off during practice on Tuesday. Melone and his teammates will open their season Friday night at Lynnfield High.

Andrew Melone and his Pentucket football teammates couldn't believe what they were hearing. They had only been practicing for two days when co-head coach Steve Hayden gathered the team during warmups and delivered the bad news.

Someone had been exposed to COVID-19, he said, and they would have to shut down for two weeks.

"The looks on everyone's faces we thought he was joking, and then we had to go home," said Melone, a senior captain and one of the team's top wide receivers. "The group of seniors, we looked at each other like 'this can't be real.'"

Like every Massachusetts high school football program, Pentucket's players sat out the fall waiting and hoping that they would get a chance to play when the "Fall 2" season arrived in early spring. To have a two-week pause right out of the gate was a devastating setback, but once the initial shock wore off Pentucket got back to work, diving into remote position meetings to avoid falling too far behind.

Once the pause ended, Pentucket understood what was at stake and was determined to make the most of any opportunity it had

"There was a big sense of urgency, not a lot of jokes, more straightforward, this is what we're going to do and how are we going to do it," Melone said. "We were going hard and we were ready. The shutdown made us want it even more."

Now, at long last, Pentucket is finally ready to start its season for real.

Tonight Pentucket will make its season debut, opening its abbreviated Fall 2 schedule at Lynnfield High School. The team was unable to complete it's required 15 days of preseason practice until earlier this week, forcing Pentucket to cancel its Week 1 and 2 games against North Reading and Newburyport, but Pentucket's coaches say the kids have done everything in their power to get ready despite all of the adversity they've already faced.

"If this year and the past year has shown us anything it's that kids are very resilient," said Pentucket co-head coach Dan Leary. "They took that in stride and when they came back they came back with positive attitudes."

"They're really itching to get out there," he added.

Beyond the COVID related challenges, Pentucket has also dealt with the added difficulty of not having its own home field. Due to construction on Pentucket's campus, the team will play all of its games on the road and spent much of the preseason practicing at the Amesbury Sports Park's turf fields.

Pentucket also graduated a significant number of key contributors from the 2019 squad that went 9-2 and reached the Division 5 North semifinals, but Melone said that even with new faces, last year's team set a new standard that this year's squad intends to live up to.

"There are a lot of juniors on the team this year that saw what the team brought last year and saw the mentality, so last year's team really brought that to Pentucket," he said. "There are a lot of guys stepping up who want to be there and want to learn. The coaches are the base of the team and I think they are the best in the league."

Among the new faces to watch are junior Chase Dwight, who will succeed Peter Cleary as Pentucket's new starting quarterback. Dwight enjoyed a terrific preseason and drew high praise from Hayden, who is now entering his 38th year as Pentucket coach.

"I'm very impressed with his work ethic and his commitment," Hayden said. "He's probably one of the hardest workers we have."

Melone is Dwight's top returning weapon, and senior Dylan O'Rourke is expected to take on a larger role after battling through injury in 2019. The team is also adding Silas Bucco, who is back after previously giving up the sport following a concussion as an underclassman, but who has since blossomed into one of the school's top athletes and enjoyed a strong showing this past winter in basketball.

Other players to watch include outside linebacker Joe Lynch and two-way lineman Michael Perlitch, who are both captains alongside Melone and O'Rourke, as well as returning receiver and placekicker Aidan Tierney. There will be no shortage of other opportunities for newcomers to make an impact when the team kicks off against Lynnfield, which enters Week 3 at 2-0 after holding off Newburyport in a 13-7 thriller last Saturday.

"We're excited, I think everyone has the pregame butterflies like football brings," Melone said. "We know Lynnfield is a tough team, they showed that in the last two games, but if all goes well I think we're prepared and we know what it takes to beat them and I hope the outcome is what we want."